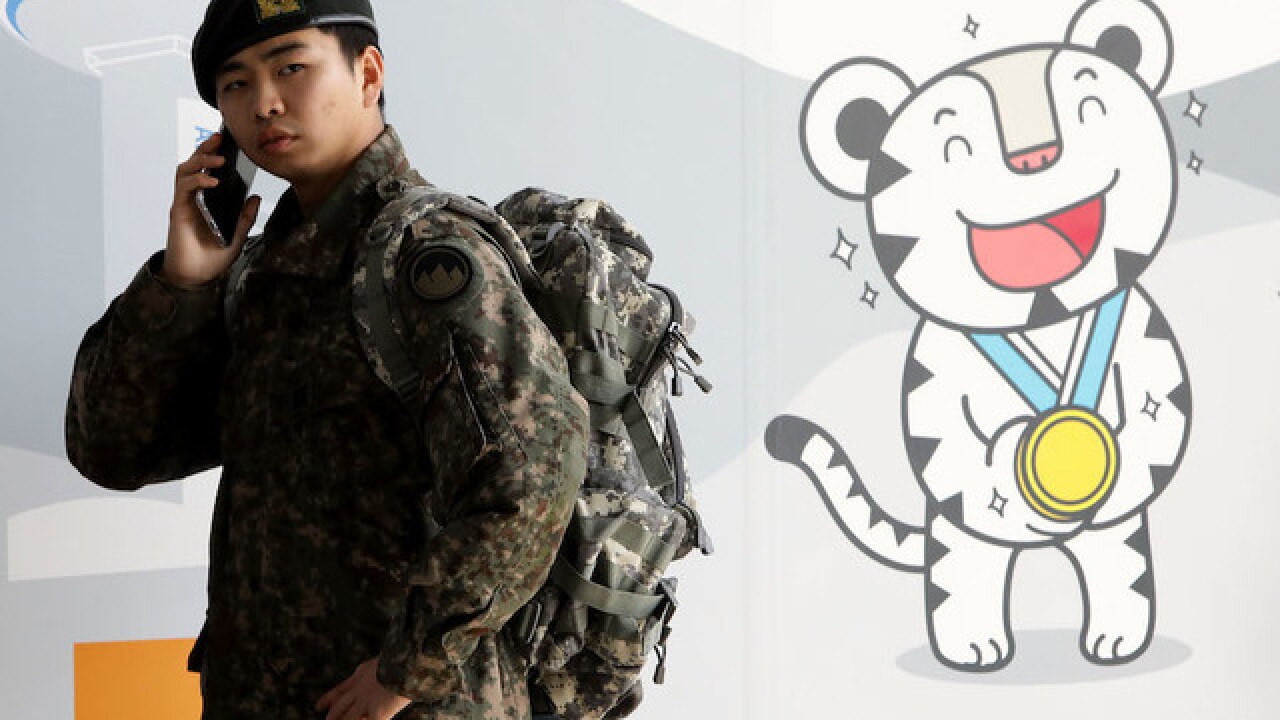 Image copyright 2018 Getty Images. All rights reserved. This material may not be published, broadcast, rewritten, or redistributed.
Chung Sung-Jun
<p>A South Korean soldier uses mobile phone at the 2018 PyeongChang Winter Olympic and Paralympic Games PR booth on January 5, 2018 in Seoul, South Korea. North Korea accepted a proposal to hold talks with South Korea on Jan. 9 ahead of the Winter Olympics in February. </p> 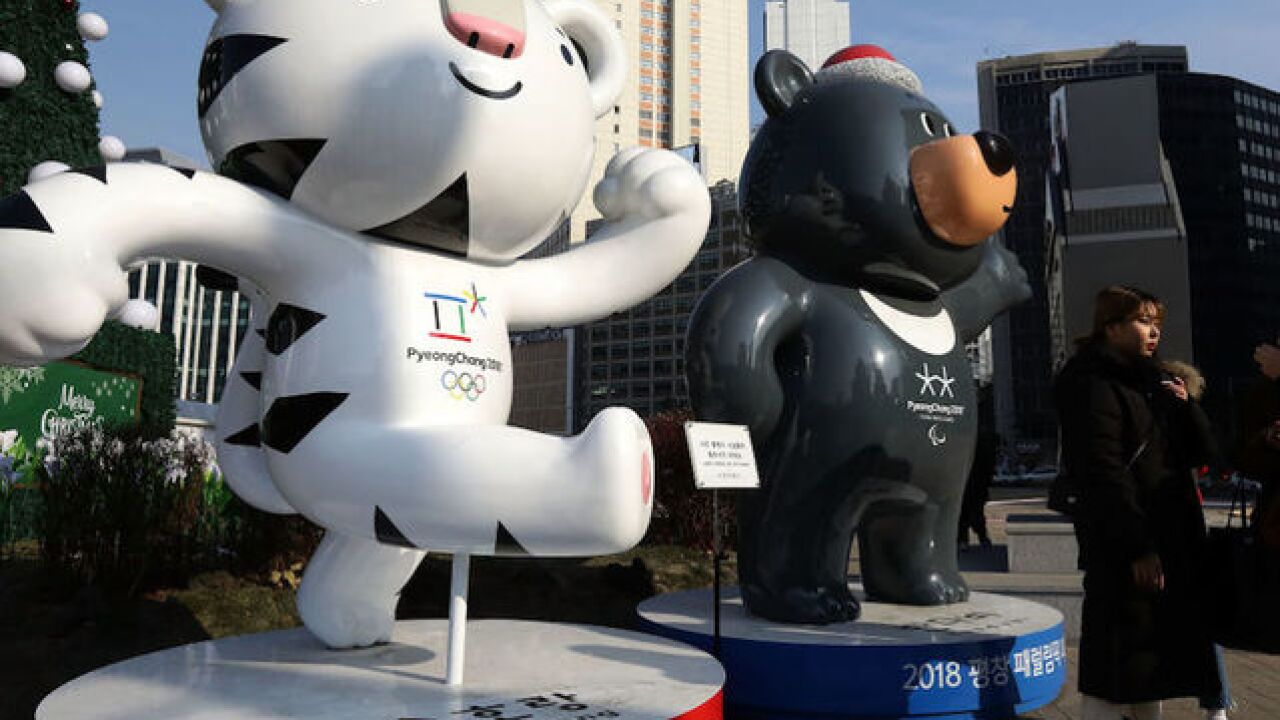 North Korea has agreed to send a delegation to next month's Winter Olympics in South Korea, the first notable breakthrough to come out of a face-to-face meeting Tuesday between the neighboring nations.

The hotline was one of many that were closed as inter-Korean relations soured.

Tuesday's meeting, the first to be held between the two countries in more than two years, began as many potentially awkward encounters do: with small talk about the weather.

"Entire rivers and mountains are frozen," Ri Son Gwon, the chief North Korean negotiator, told reporters. "It wouldn't be an exaggeration to say that compared to nature's weather, the inter-Korean relationship is even more frozen."

The five-member North Korean delegation, dressed in fitted western-style dark suits and polished dress shoes, arrived at the border via motorcade shortly before 9:30 a.m. Seoul time, before making the short walk across the military demarcation line into the South Korean side of Panmunjom.

Once inside, Ri was joined by his South Korean counterpart, Unification Minister Cho Myoung-gyon. The two men then entered the talks side-by-side at 10 a.m. Seoul time.

"We expressed the need to promptly resume dialogue for peace settlement, including denuclearization, and based on the mutual respect (the two Koreas) cooperate and stop activities that would raise tensions on the Korean Peninsula," Chun said.

South Korean negotiators also floated organizing another round of reunifications for families separated during the Korean War -- which is technically still ongoing, as no formal peace treaty has been signed.

Both South Korean President Moon Jae-in and North Korean leader Kim Jong Un were able to listen to the discussions in real time, and each had a hotline at their disposal, direct to the Peace House.

John Delury, a professor at Yonsei University's Graduate School of International Relations in Seoul, said the final two proposals were presented to the North Koreans last year, but no headway was made.

"South Korea has been working at this for a long time," he said. "Seoul already proposed those things: let's get our militaries talking and lets reunite families. Technically, North Korea really never said no."

Tensions on the Korean Peninsula escalated in 2017, with Kim overseeing significant advancements in Pyongyang's nuclear and long-range missile technologies.

Prior to Tuesday's negotiations, analysts and Korea watchers had advised against getting too excited about these talks.

"I think prudence dictates that we be very cautious about these talks," said Evans Revere, a former US diplomat in South Korea. "We've been down this road before ... in almost every instance, ultimately we've been disappointed."

Some expressed a sense of guarded optimism in the fact the two sides were actually sitting down and talking.

"It's a lot better than having zero dialogue," said Rodger Baker, vice president of strategic analysis at the geopolitical intelligence firm Stratfor.

China, Russia and Japan all welcomed the talks in public statements. The three countries were part of the now-defunct six-party talks in the 2000s, a failed diplomatic effort to end North Korea's nuclear program.

In a New Year's address last week, Kim appeared to extend a peace offering to his South Korean counterpart. The North Korean leader said he was willing to send a delegation to the quadrennial games taking place in the winter resort city of Pyeongchang in February, touching off events that led to Tuesday's high-level meeting.

To date, the only North Koreans to qualify for the Pyeongchang Games are the figure skating pair of Ryom Tae Ok and Kim Ju Sik. However, the North Korean National Olympic Committee did not meet an October 30 deadline to accept their spot.

The International Olympic Committee (IOC), which organizes the Games, has welcomed talks between the Koreas. In a statement provided to CNN last week, the committee said it would keep open its invitation for a North Korean delegation to participate and "will take the final decision in due time."

Last week, a spokesman for the South Korean Unification Ministry said he believed North Korea and the IOC would hold talks in the coming days.

Despite climate and terrain favorable for participating in cold-weather sports, North Korea hasn't sent a delegation the Winter Olympics since 1992 (the Winter and Summer Games were hosted in the same year until 1994).

Pyongyang boycotted the 1988 summer Games in Seoul after efforts to jointly host the event with the South collapsed. North Korea, along with a handful of other allies of the USSR, also boycotted the 1984 Los Angeles Olympics in response to the US boycott of the 1980 Olympics.

Since the 1988 Games, North Korea has participated in every Summer Olympics. They took home seven medals during the Rio Games in 2016.

In his New Year's speech, Kim called the Pyeongchang Games an "auspicious event" and said his country "earnestly wished" for them to be a success.

North Korean state media has not yet appeared to comment on the outcome of Tuesday's talks, and it remains unknown whether the Kim regime has attached any conditions to its decision to attend the Games.

Speaking to CNN, Duyeon Kim, a visiting fellow at the Korean Peninsula Future Forum, speculated that Pyongyang might try to extract as many concessions as possible in return for its participation at the Olympics. "Under the table or upfront. In the past the South has had to pay a certain amount, there has always been a price tag for the North's participation," she said.