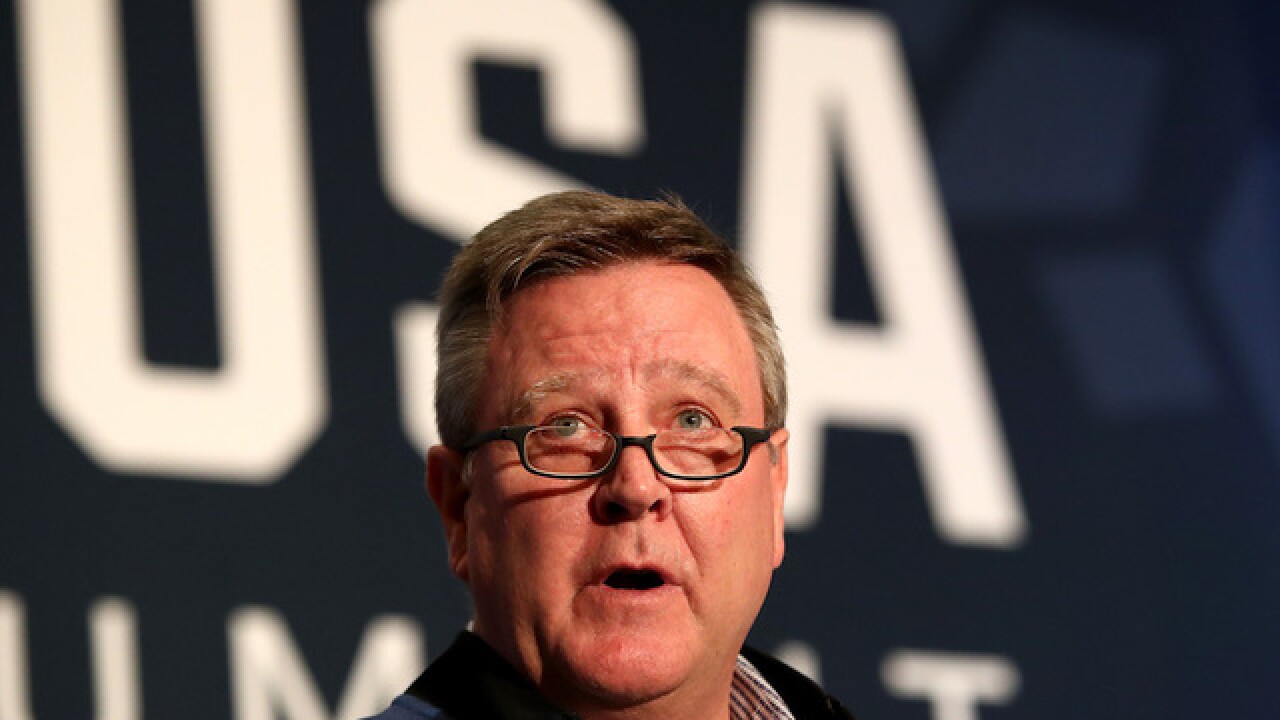 Image copyright 2017 Getty Images. All rights reserved. This material may not be published, broadcast, rewritten, or redistributed.
Maxx Wolfson
<p>USOC CEO Scott Blackmun addresses the media during the Team USA Media Summit ahead of the PyeongChang 2018 Olympic Winter Games on September 25, 2017 in Park City, Utah. (Photo by Maxx Wolfson/Getty Images)</p>

Scott Blackmun is stepping down as the chief executive of the United States Olympic Committee for health reasons, the organization announced Wednesday.

In a  statement posted on its website , the USOC said Blackmun is resigning after eight years because he has prostate cancer.

In January, it was Blackmun who apologized to all sexual abuse victims of former national gymnastics team physician Larry Nassar, stating that the "Olympic family is among those that have failed you."

"The USOC is at a critical point in its history," the organization said. "The important work that Scott started needs to continue and will require especially vigorous attention in light of Larry Nassar's decades-long abuse of athletes affiliated with USA Gymnastics."

Blackmun said in the statement that the job was immensely rewarding and the highlight of his professional life.

"I am proud of what we have achieved as a team," he said.

Several members of Congress had called on Blackmun to resign after Nassar was sentenced in federal court for child pornography and in two state courts for sexual abuse. More than 160 people gave victim impact statements.

"Scott Blackmun's resignation is long overdue," said Sen. Jeanne Shaheen, a Democrat from New Hampshire. "It's clear that the culture at the US Olympic Committee desperately needs to change so that it prioritizes the health and safety of US athletes. In the meantime, Senator (Joni) Ernst (a Republican from Iowa) and I will continue to urge the Senate to establish a special committee to investigate the US Olympic Committee and its governing bodies."

The USOC has hired a law firm to investigate the actions of the USOC and USA Gymnastics in the Nassar scandal.

The USOC earlier this month issued a statement saying, "we have consistently said we learned in 2015 of a doctor potentially having abused an athlete and that was reported to the FBI. That's what is supposed to happen."

Lyons said Wednesday she was devastated to learn Nassar abused girls and women for so long. She added the USOC had made reforms and was announcing new steps to prevent abuse.

"The USOC has made significant progress to strengthen protections for athletes, but our collective efforts to improve athlete safety must never cease," she said in  a statement.  "We must honor the strong voices who have stood up against abuse and bring real and lasting change to the US Olympic and Paralympic family's ability to detect, report, investigate, resolve and end abuse."

He replaced Stephanie Streeter as full-time CEO in 2010, just before the Vancouver Games.

Blackmun's resignation also comes three days after the end of the Winter Olympics, where the US medal count was its lowest since 1998.