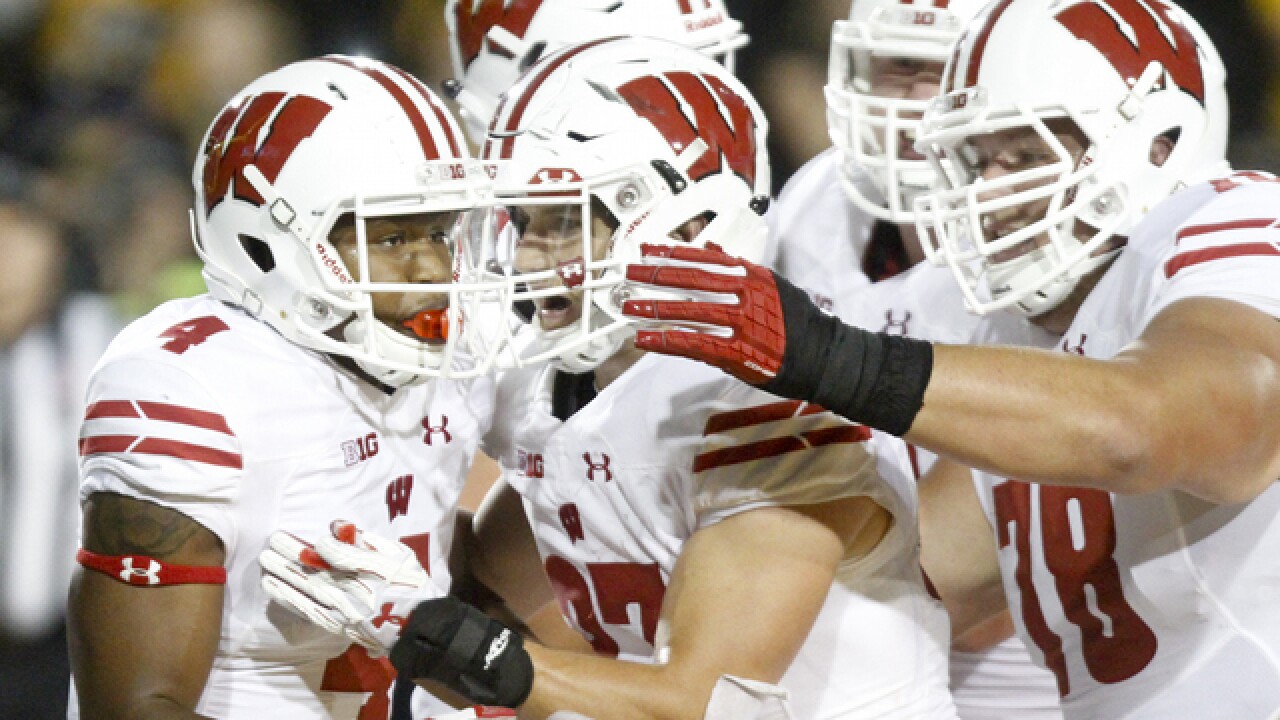 Copyright Getty Images
Matthew Holst
<p>IOWA CITY, IOWA- SEPTEMBER 22: Wide receiver A.J. Taylor #4 celebrates with running back Garrett Groshek #37 of the Wisconsin Badgers after scoring a touchdown in the second half against the Iowa Hawkeyes, on September 22, 2018 at Kinnick Stadium, in Iowa City, Iowa. (Photo by Matthew Holst/Getty Images)</p>

IOWA CITY, Iowa (AP) -- With their season on the line in late September, Wisconsin showed that the Big Ten West will likely run through Madison yet again.

Alex Hornibrook threw a 17-yard TD pass to A.J. Taylor with 57 seconds left and No. 18 Wisconsin bounced back from last week's loss by rallying past Iowa 28-17 on Saturday night.

Jonathan Taylor had 113 yards rushing and Alec Ingold ran for a 33-yard score with 22 seconds left for the Badgers (3-1, 1-0 Big Ten), who also got a major leg up on the Hawkeyes -- perhaps their biggest threat in their quest for a third straight West title -- in the league opener.

"It wasn't a perfect game by any means, but it was a great team win," Wisconsin coach Paul Chryst said. "They stepped up and made plays when they had to."

Wisconsin marched 88 yards in 10 plays on the game-deciding drive, capped when Hornibrook found an open Taylor for his third touchdown of the game.

Hornibrook finished 17 of 22 passing for 205 yards, and his three TDs were a season high.

The Badgers took advantage of a short field caused by an Iowa fumble to go up 14-10 on Hornibrook's 12-yard TD pass to Danny Davis. The Hawkeyes responded with Nate Stanley's second touchdown throw to Noah Fant, from a yard out, to make it 17-14 with 1:37 left in the third quarter.

Iowa (3-1, 0-1) seemed to have the Badgers pinned, but Wisconsin overcame one of the nation's best defenses in winning its fifth straight in Iowa City.

Stanley threw for 222 yards on 14 of 23 passing, but he was picked off on a deflected ball with 38 seconds left. Ingold then broke free, making the final margin seem a lot bigger.

"They had a good blitz dialed up against us ... it was just a tough play and they capitalized on it," Stanley said of his pick.

Wisconsin: Don't count Wisconsin out of the playoff yet, though after losing last week to BYU 24-21 the Badgers are still way, way out of the picture. Beating Iowa in Iowa City isn't easy to do -- just ask Michigan in 2016 and Ohio State in 2017 -- and with road games left against Michigan and Penn State, the opportunity is there for Wisconsin to build a solid postseason resume. The Badgers just can't lose again.

Iowa: The Hawkeyes blew a golden opportunity to move to 4-0, join the Top 25 and start thinking about a special season. But the schedule sets up nicely for the Hawkeyes to end up 9-3 or maybe even 10-2, despite playing four of their next five on the road.

T.J. Hockenson had three catches for 108 yards for Iowa. ...Jake Ferguson caught four passes for 58 yards, and his 6-yard TD grab completed a 95-yard drive that opened the scoring. ...Iowa lost a pair of fumbles and had a turnover margin of minus-3, very unusual for a program that prides itself on protecting the ball. ...Wisconsin had eight penalties for 68 yards.

On a 3rd-down-and-5 in the middle of Wisconsin's 88-yard drive late in the fourth, Hornibrook found Garrett Groshek for a 5-yard catch that gave the Badgers a first down by barely the nose of the ball. Hornibrook found A.J. Taylor waiting over a fallen Iowa defender three plays later. "I was proud of the way guys stayed in it. We needed to be to give ourselves a chance," Chryst said.

Wisconsin might move up a few spots by winning at night at Kinnick Stadium.

Wisconsin is off next week. The Badgers host Nebraska on Oct. 6.

Iowa is also heading into its bye week. The Hawkeyes play at Minnesota on Oct. 6 in its first road game.