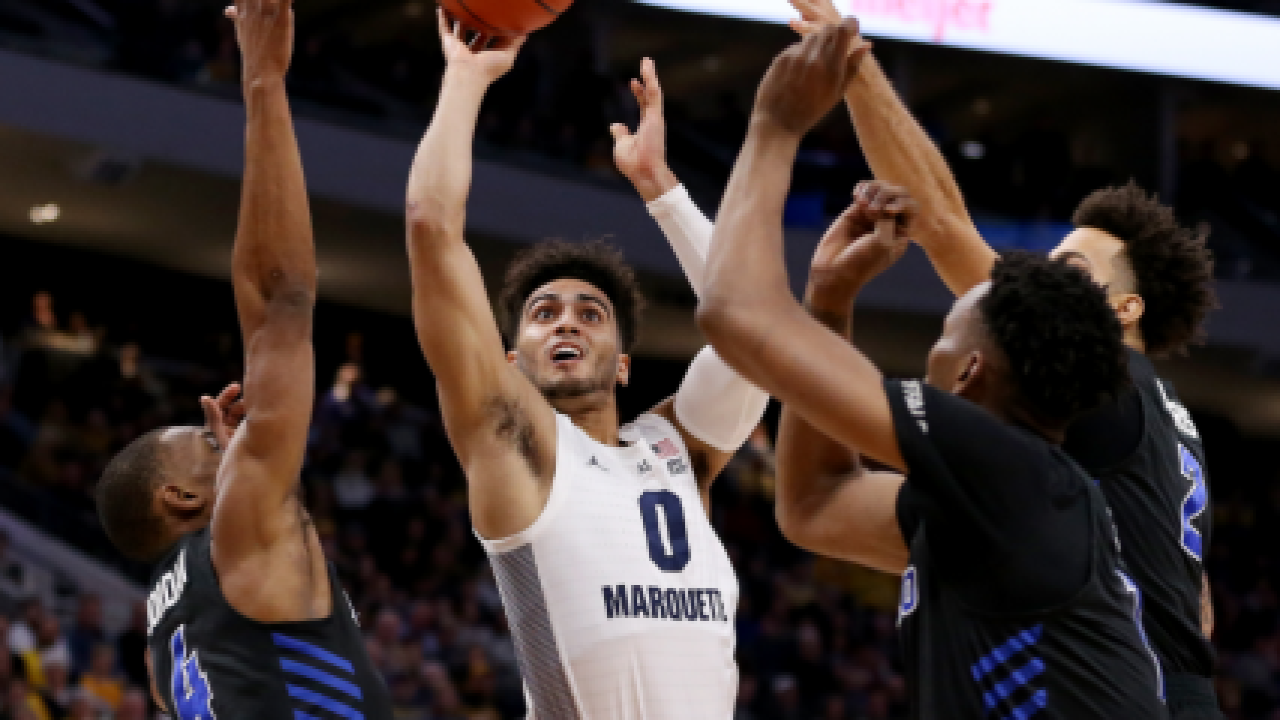 OMAHA, Neb. (AP) — Already one of the nation's most prolific scorers, Markus Howard outdid himself.

Marquette's junior guard made shots when he was wide open, shots when he had a hand in his face, shots while he was falling away, shots in heavy traffic in the lane.

When he was finished Wednesday night, Howard had scored a Big East-record 53 points, with 14 coming in overtime as the No. 21 Golden Eagles defeated Creighton 106-104.

"I guess we shouldn't be surprised anymore," Marquette coach Steve Wojciechowski said. "He's done it enough where on certain nights he's capable of being magical. Every night he's really, really good. He certainly delivered at an incredible level tonight, and his teammates came up with some big plays, too."

No play was bigger than Sam Hauser's 3-pointer to force overtime. With the Golden Eagles within 85-82 and 0.8 second on the clock, Creighton's long inbound pass touched nobody and rolled out of bounds on the other end.

That gave Marquette possession under its basket. Hauser jumped to catch the inbound on the left wing and launched a deep shot that left his fingertips just before the clock hit zeroes. The 3-pointer was ruled good immediately, and the call stood after a long video review.

"It means a lot, and it's a great accomplishment. But I'm more proud of the win and the way we won." — Marquette's Markus Howard, who scored a Big East-record 53 points Wednesday night.

Howard's dazzling offensive performance set a Marquette record and broke his own record for points in a Big East game, set last season when he had 52 against Providence. His 53 points were the most by a player in a game matching Division I opponents this season, one behind the 54 Furman's Jordan Lyons had against D-II North Greenville.

"It's like an out-of-body experience," Howard said. "None of that was me. I give all that to God. He took control of that game for me. I can't take the credit for it. My teammates put me in great positions. They gave me great screens to get me open. It means a lot, and it's a great accomplishment. But I'm more proud of the win and the way we won."

Howard increased his Big East-leading scoring average to 25.8 points per game. He had 45 points against Kansas State and another 45 against Buffalo, with 40 in the second half of that game.

"He's one of the best players I've played against," said Creighton's Davion Mintz, who was assigned to guard Howard. "He's a smaller guy, so I know he's used to making tough shots with a hand in his face. He probably practices that, and he's mastered that. He had a good day today."

Marquette (13-3, 2-1 Big East), which won for the first time in four road games, never led until Howard scored on his team's first possession of overtime. Creighton (10-6, 1-2) dropped its second straight.

"This can't define us," Bluejays coach Greg McDermott said. "It's a devastating loss. We let one get away. My staff and I have to make sure the ending to this game doesn't cost us another game."