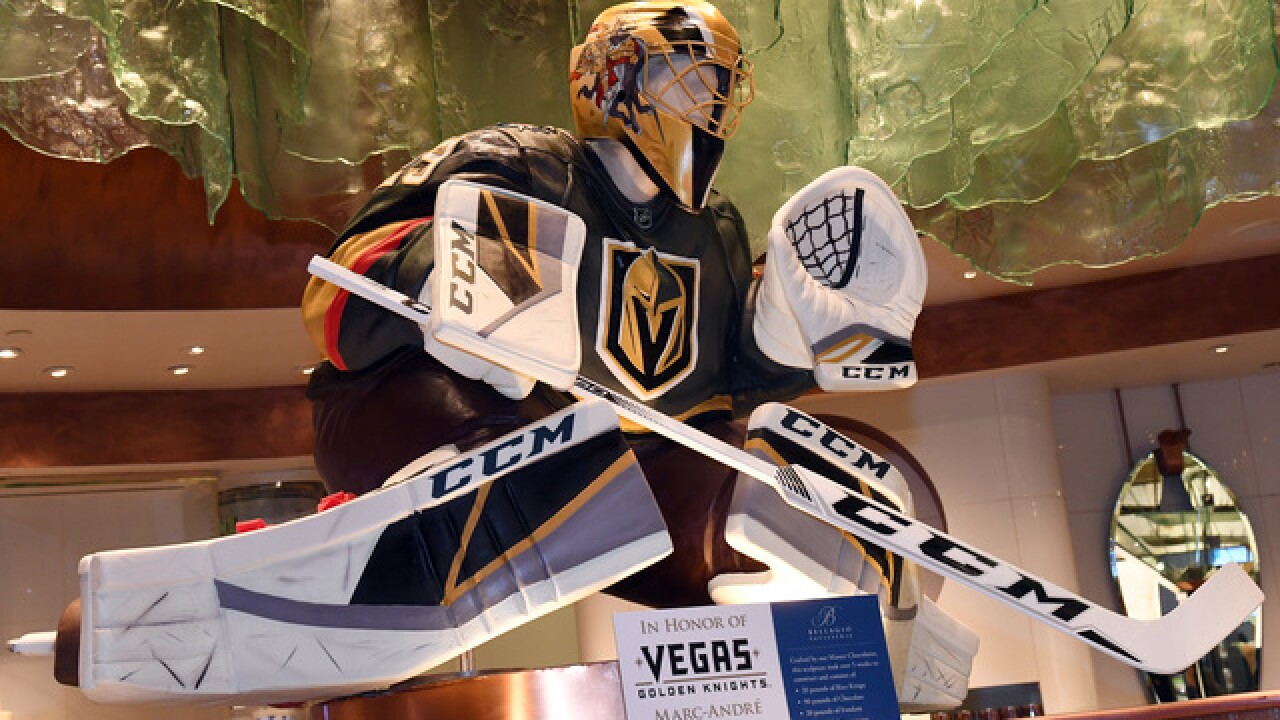 Copyright 2018 Scripps Media, Inc. All rights reserved. This material may not be published, broadcast, rewritten, or redistributed.
Ethan Miller
LAS VEGAS, NV - APRIL 11: The Bellagio Patisserie honors the Vegas Golden Knights with a nearly five-foot-tall chocolate sculpture of goaltender Marc-Andre Fleury ahead of Game One of the Western Conference First Round on April 11, 2018 in Las Vegas, Nevada. It took master chocolatiers five weeks to make the sculpture, which contains 90 pounds of chocolate. (Photo by Ethan Miller/Getty Images for MGM Resorts International)

The Bellagio Hotel in Las Vegas, Nevada made a 120 pound chocolate statue of the Las Vegan Golden Knights' goaltender Marc-Andre Fleury to celebrate the team's playoff berth in their inaugural season.

The pastry chefs at the hotel worked on the giant project for five weeks, according to the Las Vegas Review Journal. The statue, made of rice cereal treat, fondant and chocolate, weighs 90 pounds and is displayed inside the hotel.

“I saw pictures of it. It looks awesome," Fleury told the Review Journal. "I’m going to stop by with my kids and see it. I may have to steal a piece when they’re not looking.”

While the chefs who spent so long creating it might not love to see Fleury hack of a hunk and chow down, they shouldn't be too miffed after the season he had in net.

In 46 games this season, the 33 year-old Fleury has saved 92 percent of shots against him and has a goals against average of 2.24. Both are career highs.

Fleury was the Golden Knights 29th and second to last selection in the 2017 NHL Expansion draft, but he's a big reason the team became the first expansion team to make the playoffs in their first season since 1979-1980.

The Golden Knights finished an impressive 51-24-7 this year, earning the fifth best record in the league, and were 8 points back of the top seeded Nashville Predators.

They will take on the LA Kings in the first round of the Stanley Cup Playoffs.