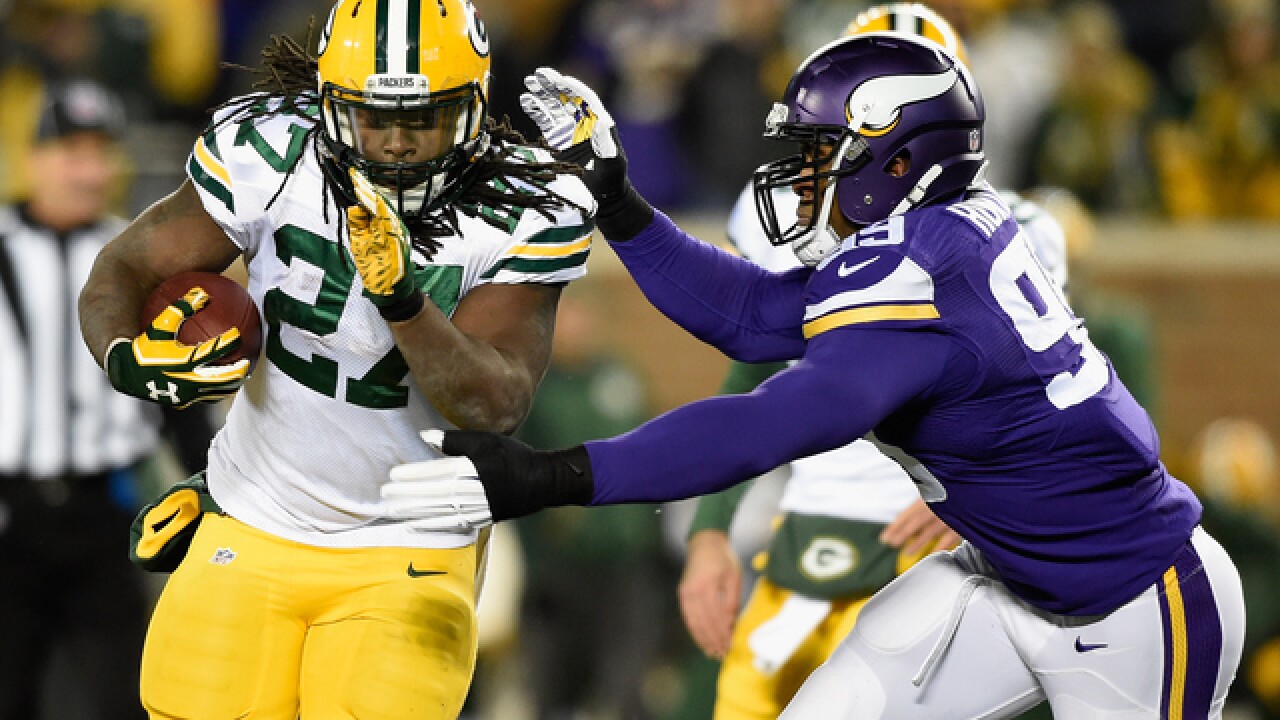 Hannah Foslien
<p>MINNEAPOLIS, MN - NOVEMBER 22: Danielle Hunter #99 of the Minnesota Vikings ties up Eddie Lacy #27 of the Green Bay Packers during the third quarter of the game on November 22, 2015 at TCF Bank Stadium in Minneapolis, Minnesota. The Packers defeated the Vikings 30-13. (Photo by Hannah Foslien/Getty Images)</p>

The 111th meeting of the Packers and Vikings will determine the NFC North Division Championship.  If the game ends in an overtime tie, the Packers would win the division based on head to head tiebreaker - Green Bay beat Minnesota 30 to 13 in Minneapolis in November.

The Packers hold a 59-49-2 advantage in the overall series, that includes two postseason meetings, and the Packers have won 10 of the last 12 games with one tie.

In that November game, the Packers used a dominant defensive front seven performance to batter the Vikings, holding the league’s leading rusher Adrian Peterson to just 45 rushing yards on 13 carries while sacking quarterback Teddy Bridgewater 6 times.  That kind of defensive performance would certainly help Sunday night in Lambeau Field because the Packers offense shows no signs of coming out of a season-long slump.

Both the Packers and Vikings have the luxury of tickets to the postseason, so this game Sunday merely determines who gets to play at home next week and who travels for the Wild Card playoffs.

The Vikings are playing well coming in off back-to-back home victories over Chicago and the New York Giants, outscoring those two foes 87 to 34.  The Packers are coming off one of the worst defeats of the Aaron Rodgers era - a 38-8 verdict in Arizona.

I am not a big believer in moral victories in the National Football League.  If you take to the road and you lose, you don’t glean a lot of confidence from the experience.  The loser of the game does not get a drink box after the game and a pat on the back from the coach saying “good job.”

Once in a while there is an exception to this rule.  When the injury riddled Packers of 2010, without quarterback Aaron Rodgers, went to Foxborough and lost 31-27 to the powerful New England Patriots, they gained a measure of confidence.  Suddenly this team started believing in itself and it did not lose the rest of the way, capping an improbable run from 6th seed in the NFC to Super Bowl Champs.

Three weeks ago, the banged up Minnesota Vikings, coming off a demoralizing 38 to 7 defeat at the hands of the Seattle Seahawks, traveled to the desert on a short week to visit the powerful Arizona Cardinals.

Minnesota, without three of its best defenders, hung in all night and fell 23-20 to the team many tout as the best in football.  I sense coach Mike Zimmer’s Vikings gained a little confidence from that game.  The next week they pummeled the Bears 38-17 and last week took apart the New York Giants 49 to 17.

The Defense got back All Pro safety Harrison Smith, outside linebacker Anthony Barr and nose tackle Linval Joseph, the quarterback is red hot completing 70% of his passes with 6 touchdown passes and no interceptions - the Vikings are very much an ascending team.   Plus the Vikings have found a real third down compliment to Adrian Peterson in Jerrick McKinnon, who scored on touchdown runs of seven and 68 yards against the Giants.  In the six weeks since they played the Packers, this Minnesota team has improved by leaps and bounds.

At this time of year, it doesn’t matter who you play or where you play them, if you are playing well you will probably win.  The Minnesota Vikings may not have been ready to beat Green Bay six weeks ago in Minneapolis in a big NFC North Division game, but based on the way they are playing these last three weeks—they are more than capable of winning a game of that ilk this week.

The Packers are coming off one of their worst performances in recent memory, a 38 to 8 defeat at Arizona.  Green Bay had lost just 11 turnovers all season going into that game but turned the ball over four times Sunday with an interception and three fumbles lost.

A banged up offensive line had a lot to do with the problems the Packers encountered in Arizona.  Pro Football Focus gave all five starters on the line (Barclay, Sitton, Linsley, Lang and Bulaga) negative grades and when the backups were forced into the lineup due to injuries things got worse.

Overall the struggles of this offense are now in the “chronic” category. By now in the NFL you are who you are.  Green Bay has dipped to 24th in yardage, 26th in passing yards and 31st in yards per pass play.

The Packers defense has actually been fairly solid, but as of late has been giving up big plays at an alarming rate especially on the ground (8 explosive running plays of 14 yards or more in the last three games).  This is a good defense, but it is “complimentary good,” meaning it needs an offense to help out a little bit for this group to be really good.

Getting out in front by two possessions as they did at Minnesota in the second half makes this Packers defense all the more effective. Then they can play down hill, rush the quarterback (6 sacks 7 hurries of Teddy Bridgewater) and make things happen in the secondary.

There is no question the Packers have the ability and if healthy the team to beat the upstart Vikings Sunday night for the NFC North division title, but as they enter the game you get the feeling the Vikings are ascending and the Packers are not.

However the NFL is such a week-to-week proposition, one week you look great the next not so good. For example, Seattle and Pittsburgh were red hot going into their games last week and both lost-the Steelers on the road at Baltimore and the Seahawks at home to the Rams.

The Packers are hoping to put it together this week and win the NFC North for the fifth consecutive year while the Vikings are looking to take a major step in the development of their program by winning their first title since 2009.

It will take an “A-level” type effort and performance by the Packers to win this game the type of performance we haven’t seen from the Pack since the last time these two teams played in Minneapolis.

Anytime you play the Vikings, Adrian Peterson the great All Pro running back is first on the scouting report.  The Packers must do a good job containing him as they did in Minneapolis (45 yards on 13 carries), but more often than not AP has gotten his, with eight 100 yard rushing performances in his career against the Packers.  Here are some other matchups that could go a long way in deciding the NFC North Division title.

It is not often the two head coaches square off against one another calling plays.  Mike McCarthy will be calling the offense for Green Bay and Mike Zimmer calls the defense for Minnesota.

Zimmer likes to blitz through the “A” gaps, mixes coverages well plays primarily man on the corners and zone inside.  They usually keep just one safety high, and their three corners are all plus players: Xavier Rhodes, Terrence Newman and nickel corner Captain Munnerlyn.

The Packers have had trouble getting separation out of press man coverages all season, it will be interesting to see how much Randall Cobb moves around from slot, to outside or into the offensive backfield.  The Packers need to get their top receiver free against this secondary.

When these teams played six weeks ago in Minneapolis, McKinnon was not a big part of the game plan.  He did not carry the ball from scrimmage and caught just 2 passes for 15 yards.  Since then he has blossomed into a third down playmaker, in the last two weeks 14 rushing attempts for 99 yards and two scores plus six receptions for 84 yards and a touchdown.

He is just 5-9, 205 pounds, extremely quick and shifty.  The Packers normally would cover a third down back with an outside linebacker but McKinnon may demand safety coverage in this matchup.

The Vikings pass rushing defensive line is made up of Everson Griffen on the right side with Daielle Hunter on the left. Inside they move veteran defensive end Bryan Robison to tackle and insert former New Orleans Saint Tom Johnson alongside.

Hunter the rookie out of LSU is REALLY coming on with 3.5 sacks in the last three games.  Both Johnson and Robison give great pass rush push up the middle and Griffen on the outside is simply Minnesota’s best defensive player!

At the end of last year the Green Bay offensive line was unquestioned as one of the best pass blocking lines in the business.  This year injuries have plagued this unit and impacted their performance. The Packers are hopeful of having their starting offensive line to begin this game but everyone is banged up and how long they are able to go may tell the story Sunday night.

This should be a great battle!  Kyle Rudolph caught 6 passes for 106 yards including a 47-yard touchdown in the first matchup.  Over the last six games (including the Packers game) he has 26 passes for 313 yards and two touchdowns.  He is unquestionably quarterback Teddy Bridgewater’s favorite target.

Micah Hyde will more often than not get the assignment to cover Rudolph and this will be one of the more difficult assignments of the night.  Rudolph is not just a safety valve receiver he is the ignition in Minnesota’s quick short passing attack that has Bridgewater in a great rhythm.