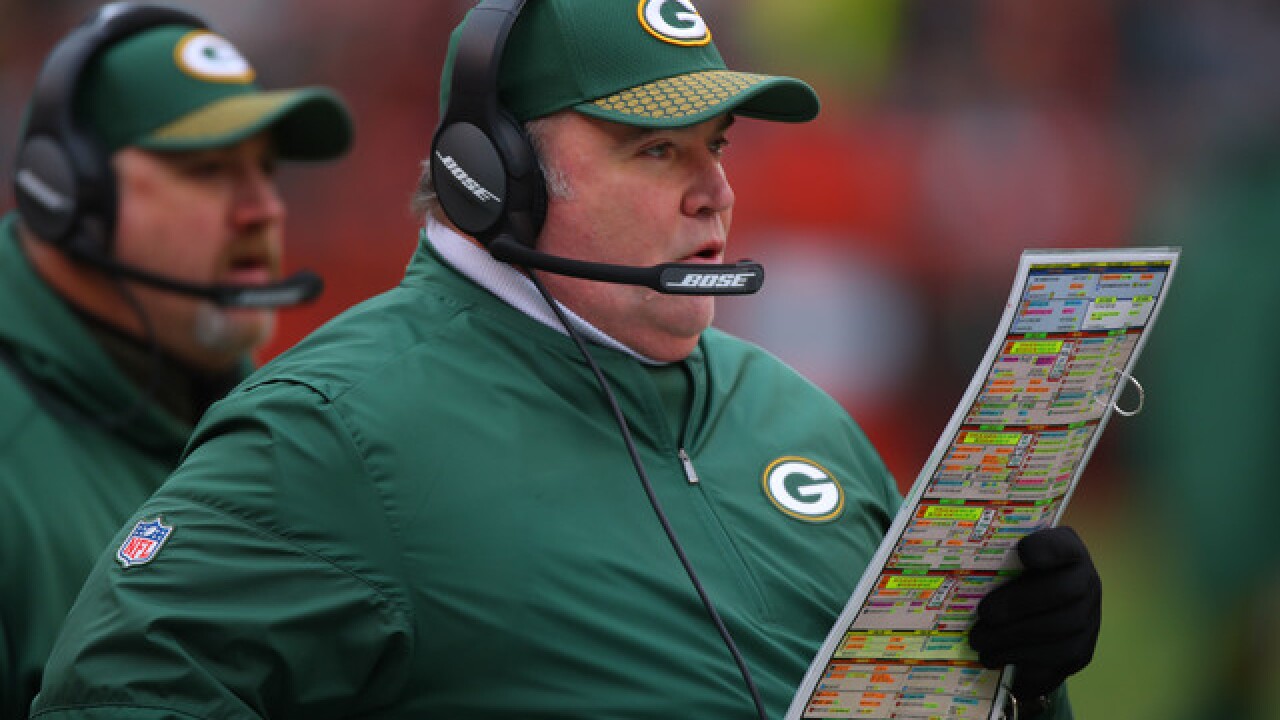 Copyright 2018 Scripps Media, Inc. All rights reserved. This material may not be published, broadcast, rewritten, or redistributed.
Gregory Shamus
CLEVELAND, OH - DECEMBER 10: Head coach Mike McCarthy of the Green Bay Packers is seen in the second quarter in the game against against the Cleveland Browns at FirstEnergy Stadium on December 10, 2017 in Cleveland, Ohio. (Photo by Gregory Shamus/Getty Images)

NFL.com reporter Ian Rapoport says the Packers could be in the market to move up in Thursday night's draft.

The new #Packers may be on display Thursday night. They are among the teams plotting a potential trade up -- from No. 14 -- for a top-tier talent, sources say. It would be their first opening round move up since Clay Matthews in 2009.

Rapoport, citing sources, said the Packers want to move up from the 14th pick in the draft for a top-tier talent.

It would be the Packers first time trading up since 2009, when they landed Clay Matthews with the 26th overall pick after swapping their second and third rounders with the New England Patriots.

Green Bay Press Gazette Packers writer, Ryan Wood, confirmed Rapoport's report tweeting , "Have heard this too. One source familiar with Brian Gutekunst suspects new GM wants to make splash with his first pick. Trading down not out of question either, depending how board falls and ability to move up. Closer 1st round gets, less likely it seems #Packers will pick at 14."

However, the Packers are not the only team scheming a move-up, per Rapoport. He said several other teams have the same thing in mind.

For teams sitting around 15, a trade-up certainly makes sense. Most draft analysts believe there is a heavy talent drop-off after the 15th pick, especially on the defensive side of the ball.

Florida State safety Derwin James, Ohio State cornerback Denzel Ward, Alabama safety Minkah Fitzpatrick and Virginia Tech linebacker Tremaine Edmunds are all expected to fly off the board after the quarterbacks and Saquon Barkley are selected.

With the Packers pining for secondary help and youthful pass rushers, those names are some of the most valuable available.

In a weird twist, most analysts expect the Packers to draft Clay Matthews' eventual replacement on Thursday.

The now 31-year-old outside linebacker—who will soon turn 32 in May—was productive in 2018, logging 7.5 sacks, but age is not friendly in the NFL and one injury could change everything.

So, nine years after a trade-up brought in one of the most recognizable trade-ups in franchise history, another trade-up could add a new face and begin a phase in Green Bay.

Regardless, per Wood's tweet, new GM Brian Gutekunst will not make Thursday night boring for the Green and Gold.