Packers win while the Detroit Lions flag the referees 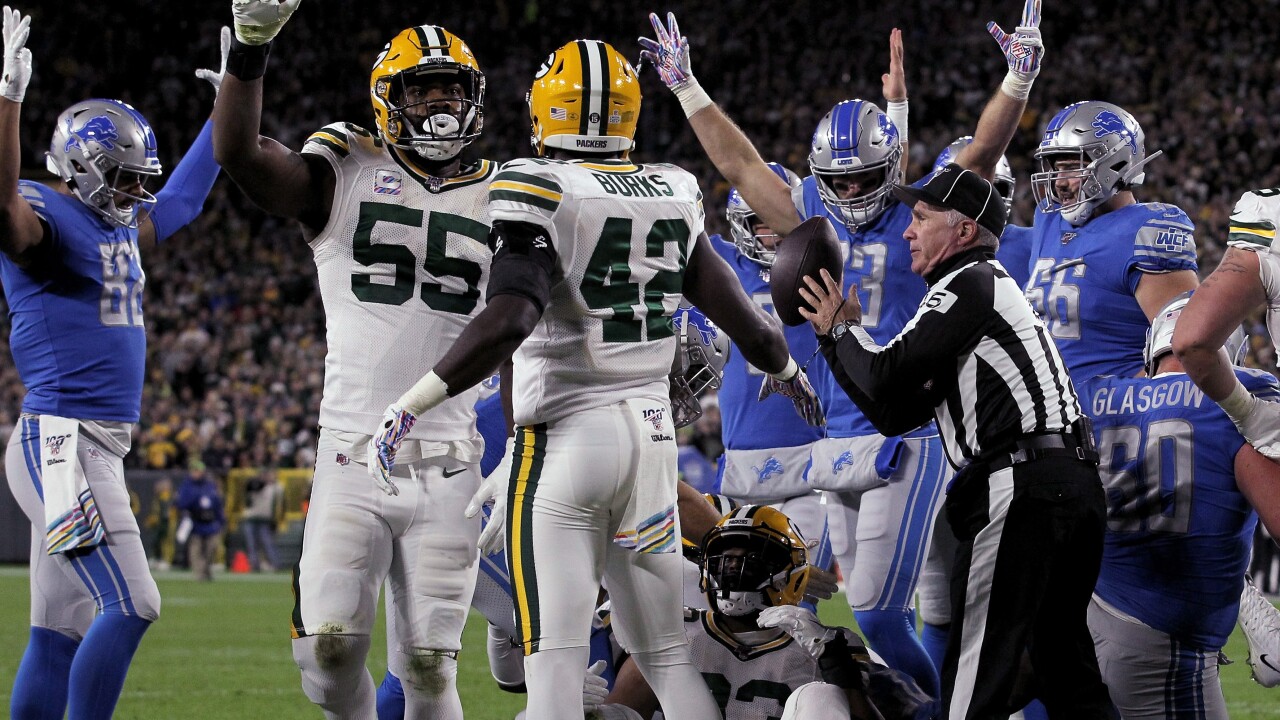 GREEN BAY — Another frustrating weekend of flag-filled football culminated with the Packers' 23-22 last-second win over the Lions on Monday night thanks to two phantom hands-to-the-face calls on Detroit defensive end Trey Flowers.

The first one came with about 10 minutes left in the fourth quarter and Detroit comfortably ahead 22-13. The flag negated a sack of Aaron Rodgers that might have sealed Green Bay's fifth straight loss to the Lions and instead led to Allen Lizard's 35-yard TD catch that made it 22-20.

The second one came on a third-down incompletion by Rodgers which would have forced the Packers to kick a field goal with about 90 seconds left, plenty of time for Detroit to respond with its own field goal drive. Instead, the Packers ran the clock down to 2 seconds before Mason Crosby kicked the game-winning 23-yarder as time expired, then did his very first Lambeau Leap.

Flowers, who had never been whistled for hands-to-the-face fouls in his five-year NFL career, said he was using the same move all game, putting his hands on left tackle David Bhaktiari's chest, not his neck or face.

"I didn't think hands to the chest was a penalty," Flowers said.

Referee Clete Blakeman said each of the calls was made by umpire Jeff Rice, and he discussed the last one with him.

"Basically, it's for illegal use of the hands, hands-to-the-face foul," Blakeman told a pool reporter. "To be a foul, we basically need some forceful contact that's prolonged to the head and neck area of the defender.

"So, in his mind he had pinned him back, it was prolonged, and that's what created the foul."

Monday Night Football analyst Booger McFarland complained about the first call on Flowers and was even more critical of the second one, saying, "you basically end the game on what I call a bogus hands-to-the-face."

Social media was abuzz over the frivolous flags.

"The referees are destroying the NFL game by game," tweeted ex-NFL star Matt Forte . "It's a shame because of how much work is put in and to have games literally won or loss by bad calls in crucial situations."

Barry Sanders chimed in , tweeting, "That is sickening... the @NFL needs to look at a way to prevent that from happening. Two phantom hands to the face calls really hurts us tonight. Yes, we could have scored TDs, but @Lions played too well to have the game end this way."