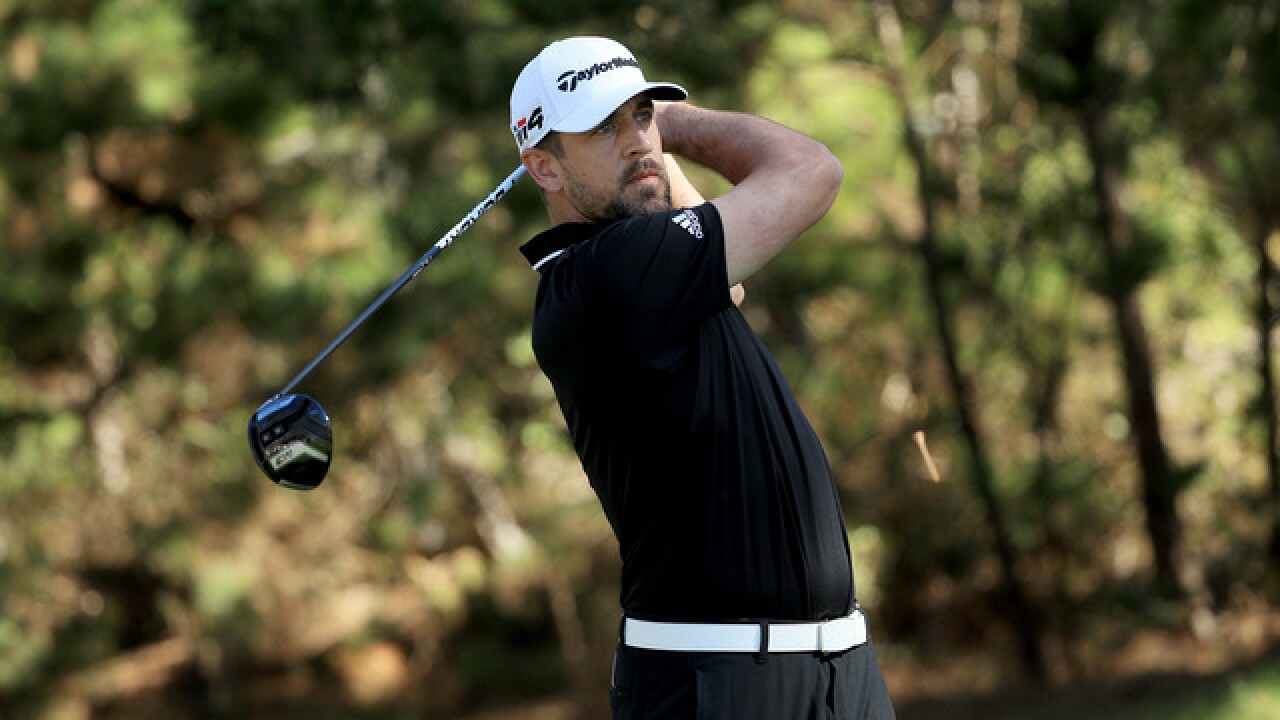 Copyright 2018 Scripps Media, Inc. All rights reserved. This material may not be published, broadcast, rewritten, or redistributed.
Mike Ehrmann
PEBBLE BEACH, CA - FEBRUARY 08: Aaron Rodgers plays his shot from the 16th tee during Round One of the AT&T Pebble Beach Pro-Am at Spyglass Hill Golf Course on February 8, 2018 in Pebble Beach, California. (Photo by Mike Ehrmann/Getty Images)

Two fine athletes, lots of laughter, countless autographs...and one shared commitment to making a difference. We are honored to shine a spotlight on two of the finest guys around, @jerrykelly13pga and @AaronRodgers12 pic.twitter.com/AGr2XR1JOw

During the official PGA tour Champions event that featured 83 pro golfers, Rodgers signed autographs, took pictures and even threw around a football with fans.

In case any Packer fans were still worried about the state of his collarbone, this event should clear things up.

And don't think just because the event was nearly 2,000 miles away from Green Bay that there weren't plenty of Packer fans there to see Rodgers.

A sea of green and gold followed him throughout his round.

It may be a cold morning in Tucson, but these two guys are warming hearts. @jerrykelly13pga and @AaronRodgers12 taking a moment between practice swings to greet the sea of green and gold waiting patiently outside the ropes at the Cologuard Classic @TucsonClassic @ChampionsTour pic.twitter.com/StssPra3Q9

Outside of fan interaction, Rodgers also got an opportunity to fine tune his golf swing while supporting his friend on the PGA Tour and Madison, Wisconsin native, Jerry Kelly.

Kelly is an ambassador for Cologuard and the reigning Rookie of the Year on PGA Tour Champions.

"We have a platform that make an impact on greater social issues and causes," Rogers said in the video from Cologuard. "And we both aligned ourselves with organizations that are trying to make a difference."

The tournament wrapped up in early March, and the winner was, appropriately, Edgerton, Wisconsin native, Steve Stricker.

The event was renamed the Cologuard Classic this year and will remain a PGA tour Champions event throughout the end of their contract in 2020.