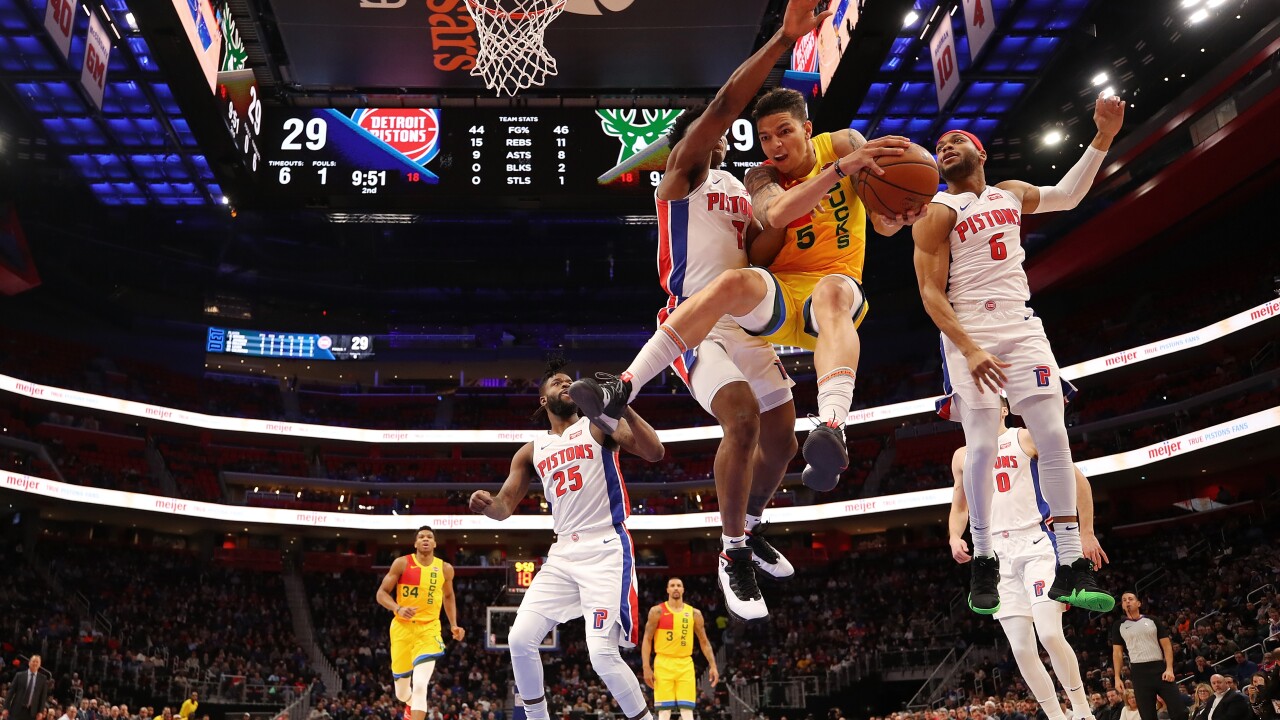 Gregory Shamus/Getty Images
DETROIT, MICHIGAN - DECEMBER 17: D.J. Wilson #5 of the Milwaukee Bucks battles for the ball with Bruce Brown and Stanley Johnson #7 of the Detroit Pistons during the first half at Little Caesars Arena on December 17, 2018 in Detroit, Michigan. NOTE TO USER: User expressly acknowledges and agrees that, by downloading and or using this photograph, User is consenting to the terms and conditions of the Getty Images License Agreement. (Photo by Gregory Shamus/Getty Images)

The Milwaukee Bucks had the best record in the NBA this season, so it would be no great surprise to see them playing for the title in June.

Of course, for this franchise, advancing at all would be a significant step.

The Bucks are an unusual top seed -- one that hasn't made it past the first round of the playoffs since 2001. Advancing to round two may be the absolute minimum expectation this time, when Milwaukee starts its postseason journey Sunday night against eighth-seeded Detroit.

It's an intriguing series mostly because it will be the first chance to observe how these Bucks handle playoff pressure as title contenders. This is a team that didn't even have home-court advantage in the first round a year ago. Now Milwaukee has it for the whole postseason.

"We know what's at stake. We know we have to get past the first round. We haven't been yet," Milwaukee's Khris Middleton said. "But at the same time, it's no pressure for us. Just keep doing what we do. Play the way we play, be who we are. We'll be fine."

The Bucks improved by 16 victories from last season, winning 60 for the first time since 1980-81. With Giannis Antetokounmpo leading the way, this might be Milwaukee's most formidable outfit since Kareem Abdul-Jabbar and Oscar Robertson were there during the first half of the 1970s -- or at least since the Don Nelson-coached teams of the 1980s.

The Bucks lost to Boston in seven games last year. They'll do their best to avoid any winner-take-all scenarios against the Pistons, who haven't won a playoff game since 2008. Detroit secured a playoff spot this year by winning at New York on the final night of the regular season. It was a step forward for the Pistons in their first season under coach Dwane Casey, but it's not clear how much more Detroit can expect from Blake Griffin, the man who did more than anyone to lift this team to the postseason.

Griffin has been dealing with a troublesome knee, and he missed the all-important game against the Knicks. Even if Griffin is healthy, everyone understands who is expected to win this series.

"Nobody on this planet that's an NBA fan is going to expect us to win. That's great. That's good," Casey said. "I think a lot of our guys have been underdogs all their lives."

Some more things to know before the start of this series:

The Pistons swept the Bucks in the second round in 1989 en route to the NBA title. That was the last time Milwaukee won a playoff series until the Ray Allen-led Bucks went to the conference finals in 2001.

The Pistons acquired 7-foot-1 Thon Maker from Milwaukee in a trade earlier this season. He could be a key player, especially if Griffin is limited.

"Playing against Thon is going to be the weirdest thing," Antetokounmpo said. "It's going to be fun. I know he's going to come and play hard and do the best for his team. I love that about him."

Middleton was drafted by the Pistons in the second round in 2012.

Milwaukee had the second-best defensive rebounding percentage in the league during the regular season. But the Bucks will be tested by Detroit's Andre Drummond, who led the NBA with 5.4 offensive rebounds per game.

"They do a very good job of sending all their guys in, from the point to their 5-men are all in the paint to make sure that nobody gets the offensive rebound," Drummond said. "It's going to come down to really just me fighting it out. We don't need our guards coming in. ... They are very good in the open floor when we do miss."

Griffin's status is the big question heading into this series, but Milwaukee has some injuries too. Nikola Mirotic, who broke his left thumb March 19, could play in Game 1. Tony Snell (sprained ankle) is not likely to be available until the middle of the series.

Milwaukee won all four matchups between these teams in the regular season. Only one of them was decided by single digits.