“At first I was really nervous, but I thought this is just a blessing to be here tonight for my family and I,” said Karen Casper-Martinez.

The crowd cheered on Casper-Martinez as she took center court.

“It was really awesome. I have to admit it was so amazing and I feel really humbled by this because I just wanted to help,” Martinez said. 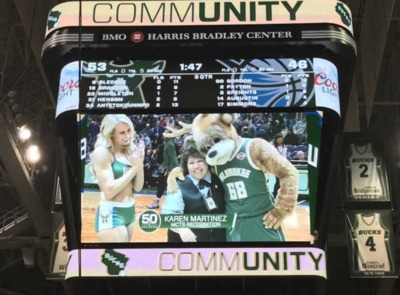 Martinez spotted the child wandering around barefoot and alone while she was driving Route 80 in October.

“We’re just the eyes it seems like of the world or I’ll say the city,” Martinez said.

She pulled over, picked him up and carried the boy onto her bus.

“We don’t do that for this attention. I wanted to help someone just to be there for that little boy it warmed my heart,” she said.

The boy was later reunited with his family.