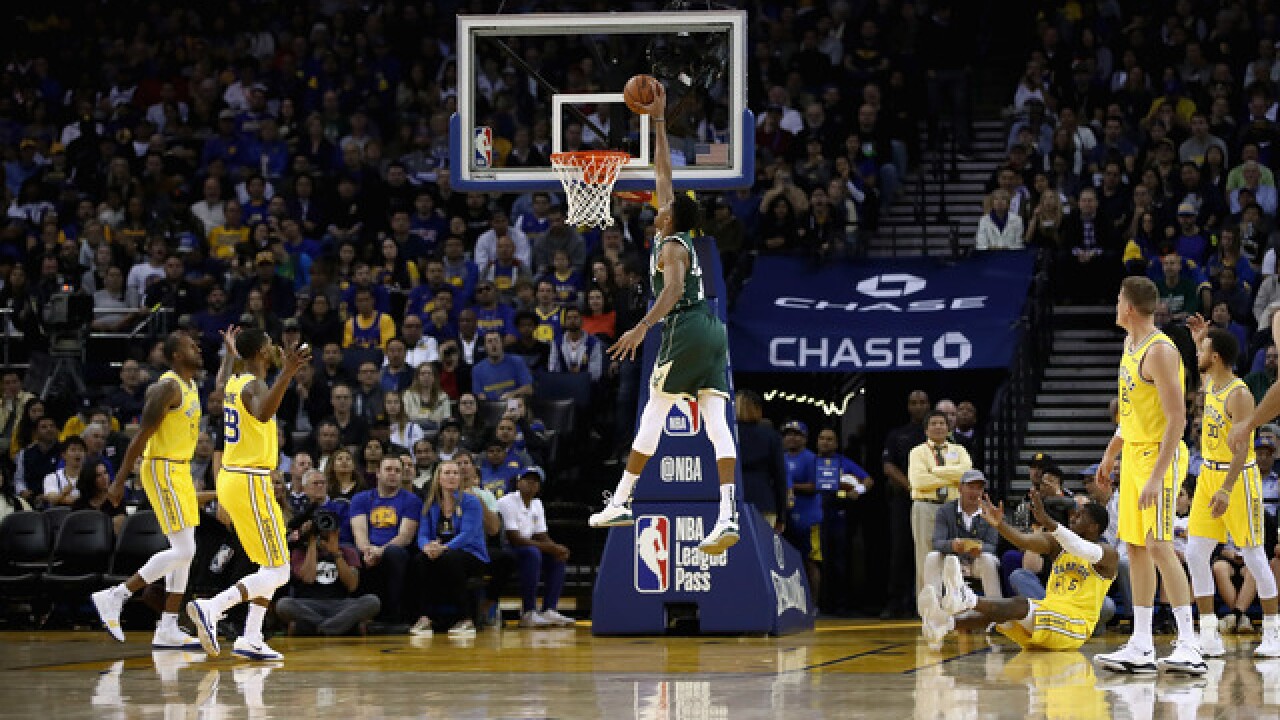 Copyright 2018 Scripps Media, Inc. All rights reserved. This material may not be published, broadcast, rewritten, or redistributed.
Ezra Shaw
<p>OAKLAND, CA - NOVEMBER 08: Giannis Antetokounmpo #34 of the Milwaukee Bucks dunks the ball against the Golden State Warriors at ORACLE Arena on November 8, 2018 in Oakland, California. NOTE TO USER: User expressly acknowledges and agrees that, by downloading and or using this photograph, User is consenting to the terms and conditions of the Getty Images License Agreement. (Photo by Ezra Shaw/Getty Images)</p>

OAKLAND, Calif. (AP) — Stephen Curry left with an injury and the Golden State Warriors were unable to recover in a 134-111 loss to the Milwaukee Bucks that snapped their eight-game winning streak Thursday night.

"We have arrived," Antetokounmpo said in a postgame interview.

The two-time defending NBA champions were already missing All-Star Draymond Green and then lost Curry midway through the third quarter. The two-time MVP strained the adductor muscle in his left leg and went to the locker room shortly thereafter. He did not return.

Curry grabbed at his inner thigh after trying to contest Bledsoe's shot in transition. He is expected to have an MRI on Friday.

Malcolm Brogdon scored 20 points as Milwaukee (9-2) won for the second straight time at Oracle Arena, including a 116-107 victory on March 29.

Westbrook missed his second consecutive game with a sprained left ankle. George also had 11 rebounds, six assists and six steals. The Thunder were 0-4 before the streak.

Steven Adams had 19 points and 10 rebounds, and Terrance Ferguson and Dennis Schroder each added 14 points. James Harden scored 19 points, but made just 7 of 19 shots for the Rockets. Clint Capela added 17 points for Houston. The Rockets had won three in a row.

Houston's Carmelo Anthony, who played for the Thunder last season and was traded this summer, scored two points on 1-for-11 shooting. Chris Paul added 10 points.

PHOENIX (AP) — Kyrie Irving scored 18 of his season-high 39 points in the fourth quarter and overtime, and Boston overcame a 22-point deficit to beat Phoenix.

Irving scored Boston's first six points in the extra period, and Marcus Morris finished with 17 against his former team — including the tying 3-pointer with 1.1 seconds left in regulation.

Devin Booker led the Suns with a season-high 38 points, and T.J. Warren had 29.

CJ McCollum added 23 points for the Trail Blazers, who have won six of seven.

Danilo Gallinari and Lou Williams each scored 20 for the Clippers. Shai Gilgeous-Alexander had a career-high 19.

The Clippers closed to 107-101 on Gallinari's jumper, but Jusuf Nurkic answered for Portland with a layup and Los Angeles could not get any closer down the stretch.