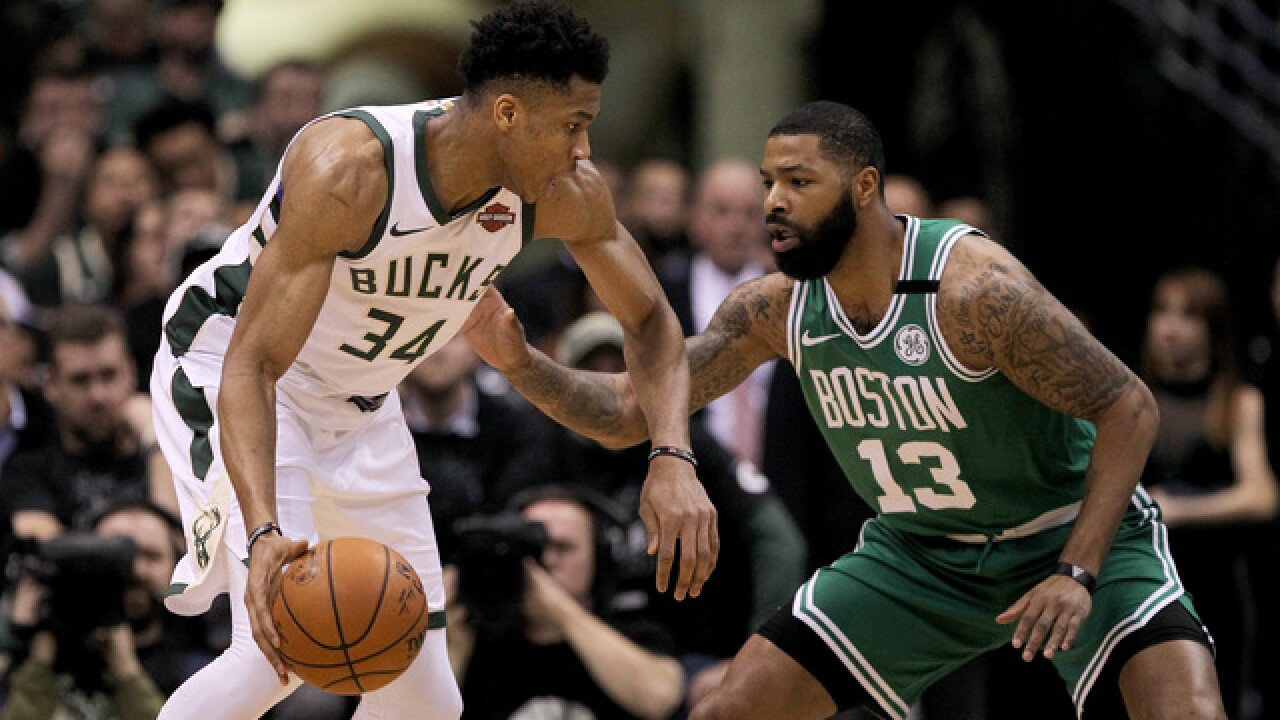 Image copyright 2018 Getty Images. All rights reserved. This material may not be published, broadcast, rewritten, or redistributed.
Dylan Buell
<p>MILWAUKEE, WI - APRIL 26: Giannis Antetokounmpo #34 of the Milwaukee Bucks dribbles the ball while being guarded by Marcus Morris #13 of the Boston Celtics in the first quarter during Game Six of Round One of the 2018 NBA Playoffs at the Bradley Center on April 26, 2018 in Milwaukee, Wisconsin. NOTE TO USER: User expressly acknowledges and agrees that, by downloading and or using this photograph, User is consenting to the terms and conditions of the Getty Images License Agreement. (Photo by Dylan Buell/Getty Images)</p>

MILWAUKEE (AP) -- Giannis Antetokounmpo had 31 points and 14 rebounds and the Milwaukee Bucks pulled away late to beat the Boston Celtics 97-86 on Thursday night to force a Game 7 in the first-round series.

Khris Middleton and Malcolm Brogdon each added 16 points, with Brogdon hitting a momentum-swinging 3 from the left corner to give the Bucks a two-possession lead with 5:22 left. The Bucks held the Celtics at bay from there to force the winner-take-all game Saturday night in Boston.

The up-and-coming Bucks haven't played a seventh game in the playoffs since losing to the Atlanta Hawks in the first round in 2010.

Both teams went on extended runs to take big leads.

The Bucks made the last big push to close out the Celtics.

Boston had to settle for perimeter looks down the stretch. They couldn't hit enough 3s, finishing 10 of 36 (28 percent) on the night, and the Bucks limited Boston on the glass.

On offense, Antetokounmpo led the Bucks' charge right at the heart of the Celtics' defense.

After Eric Bledsoe picked off Jayson Tatum's inbounds pass, Antetokounmpo converted an offensive rebound with a putback off the glass for an 89-81 lead with 3:08 left. It was part of an 11-3 run late to help the Bucks pull away for 10-point advantage.

With his team facing elimination, Antetokounmpo vowed to be more aggressive following a five-point loss in Game 5.

The two-time All-Star produced in the crunch time, scoring 20 points in the second half on 8-of-14 shooting.

Tatum finished with 22 points, and Terry Rozier had 18 for the Celtics. After holding the edge on the glass for most of the series, Boston got outrebounded 48-39.

Celtics: Coach Brad Stevens stuck with the same starting five he used for Game 5, with Semi Ojeleye in for Aron Baynes for a quicker frontcourt on defense. ... Former President Bill Clinton attended the game and exchanged handshakes with guard Marcus Smart. ... Jaylen Brown added 14 points on 6-of-15 shooting.

Bucks: C John Henson (back) missed his fourth straight game, with Thon Maker getting his first start of the series over Tyler Zeller. Maker finished with four points and one block. ... Held a 25-4 edge on transition points. ... Jabari Parker had another strong game off the bench with 11 points and 11 rebounds, while Tony Snell had 13 points.

Game 7 is Saturday night at the TD Garden in Boston.