Giannis Antetokounmpo gets a triple-double as Bucks rout Kings 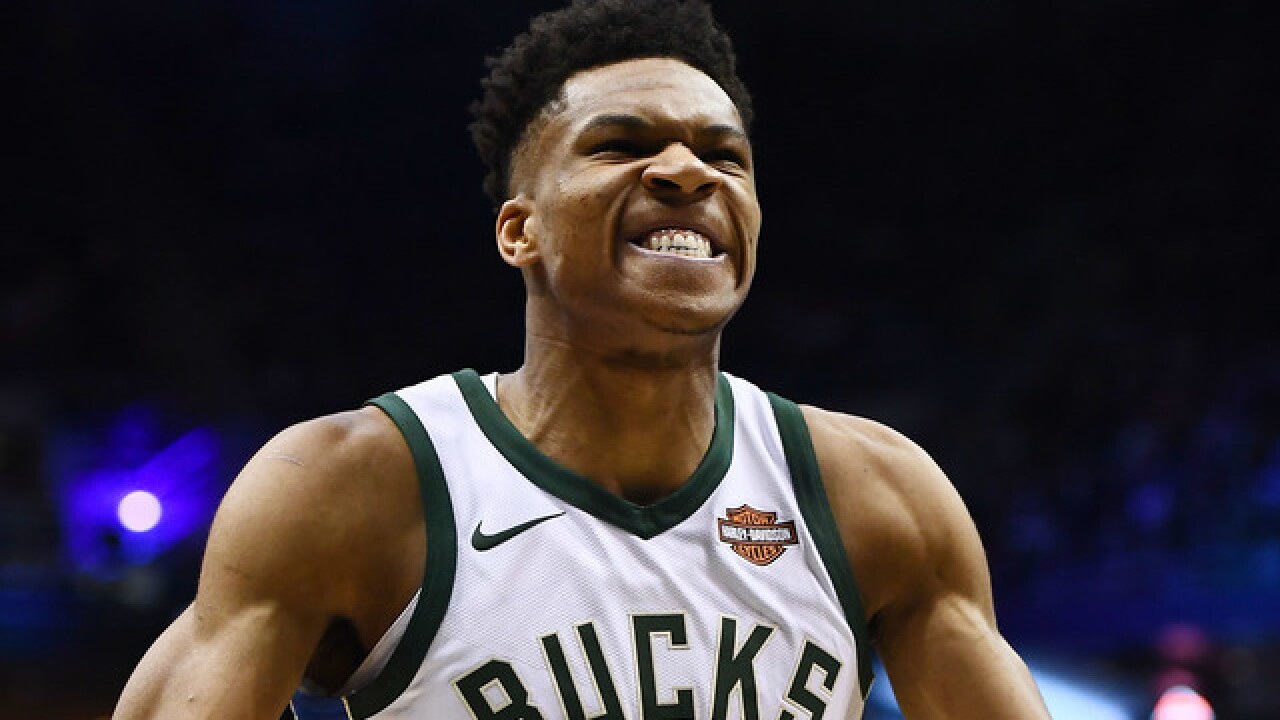 Copyright Getty Images
Stacy Revere
<p>MILWAUKEE, WI - APRIL 20: Giannis Antetokounmpo #34 of the Milwaukee Bucks walks to the sideline prior to the opening tip against the Boston Celtics of game three of round one of the Eastern Conference playoffs at the Bradley Center on April 20, 2018 in Milwaukee, Wisconsin. NOTE TO USER: User expressly acknowledges and agrees that, by downloading and or using this photograph, User is consenting to the terms and conditions of the Getty Images License Agreement. (Photo by Stacy Revere/Getty Images)</p>

MILWAUKEE (AP) — Giannis Antetokounmpo is taking his game to another level.
He had his second triple-double this season with 26 points, 15 rebounds and 11 assists to help the Milwaukee Bucks rout the Sacramento Kings 144-109 on Sunday.

"A great win for the team," Antetokounmpo said, deflecting any sense of personal satisfaction. "When I drove the ball, they were wide open. I passed it, and they knocked down everything."

The Bucks improved to 8-1 — the best nine-game start in franchise history. They set a season high for points in a game and also set the franchise record for 3s made with 22.

"Hopefully, one of the keys to Giannis being great is everybody around him being great," the Bucks first-year coach said. "We can also talk about a lot of other guys who played well, too. So, that's a great sign for Giannis and a great sign for us."

Seven other Bucks were in double figures. Eric Bledsoe scored 17, Ersan Ilyasova 15, Malcolm Brogdon and Pat Connaughton each had 13, Tony Snell and Khris Middleton each had 12 and John Henson 10.

"Coach Bud (head coach Mike Budenholzer) wants me to make plays and find them," Antetokounmpo said. "That is what I am going to keep doing. It feels great."

Antetokounmpo completed the triple-double with his 10th assist when he found Connaughton in the corner for 3 and a 108-82 lead as time expired in the third quarter. Antetokounmpo finally went to the bench with 7:48 left in the fourth and the Bucks comfortably ahead 118-90.

He pushed the lead to 78-54 with two thunderous dunks seconds apart in the third quarter. He slammed one home and then dunked again on a pass from Middleton after a turnover by De'Aaron Fox on the Kings' ensuing possession.

Antetokounmpo's first triple-double came against the Philadelphia 76ers on Oct. 24th when he had 32 points, 18 rebounds and 10 assists.

Justin Jackson set a career-high with 22 points, Buddy Hield had 19 and De'Aaron Fox 15 for the Kings who had their five-game winning streak snapped.

Jackson felt the team was still upbeat despite the most lopsided loss this season. The Kings had lost 149-129 at New Orleans on Oct. 19.

"We just went 3-1 on a four-game road trip," Jackson said. "Obviously, it hurts a little bit to lose like that, but I think we're extremely happy of how we played this road trip."

The Bucks started to take over with 12-2 run in the second quarter, keyed by seven points from Malcolm Brogdon, and led 72-48 on Ersan Ilyasova's 3 with 49 seconds left before the half.

Ilyasova scored 15 points and Antetokounmpo and Eric Bledsoe each added 13 as the Bucks surged to their best first half of scoring so far this season and led 72-50 heading into the third. Both teams let in fly from behind the arc. Milwaukee made 11 of 29 3-point attempts, including three by Ilyasova, to Sacramento's 6 for 19.

TIP-INS:
Kings: Hield came in with five straight games of 20 or more points. ... Willie Cauley-Stein went to the bench with his fifth foul at 9:13 of the third.
Bucks: G Sterling Brown was recalled from the Wisconsin Herd of the G League. The Bucks sent him to their affiliate to get some playing time.

FROM BEYOND THE ARC:
The Bucks set a franchise high with 56 three-point attempts.
"Obviously, just to get up to 56 3-point attempts is a lot, but that's what they do," Kings head coach Dave Joerger said. "They were effective."

UP NEXT:
Kings: Host Toronto on Wednesday.
Bucks: Play at Portland on Tuesday.
___
More AP NBA: https://apnews.com/NBA and https://twitter.com/AP_Sports