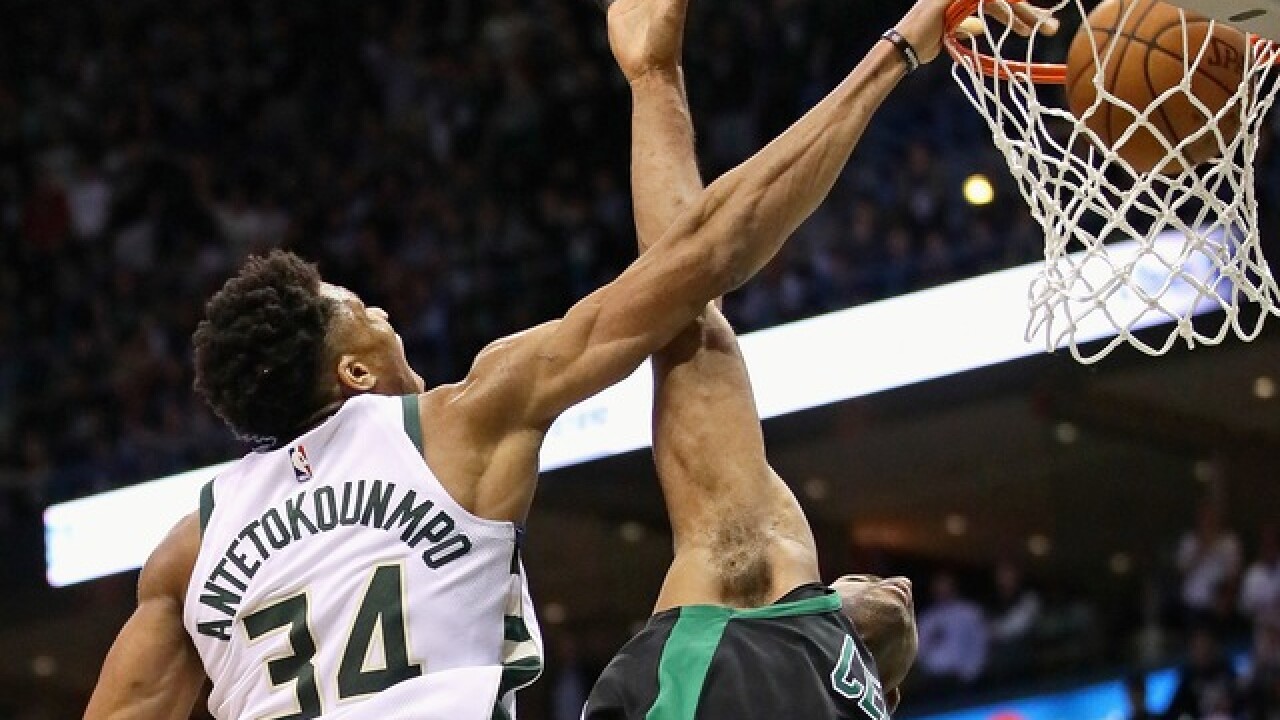 MILWAUKEE (AP) -- Giannis Antetokounmpo scored 27 points, including tipping in the go-ahead basket with 5 seconds left, and the Milwaukee Bucks beat the Boston Celtics 104-102 on Sunday to tie their first-round playoff series at two games apiece.

Boston's Marcus Morris missed a 14-footer at the buzzer with Khris Middleton's hand in his face to seal a nail-biting win for the Bucks.

Seconds earlier, the 6-foot-11 Antetokounmpo jumped and reached up with his left arm around Boston's Jayson Tatum to put back Malcolm Brogdon's missed layup for the game-winner.

Game 5 is Tuesday night in Boston.

He just couldn't hold off Antetokounmpo on the other end for the decisive tip-in.

The disappointing end for the Celtics overshadowed their spirited rally from a 65-45 deficit with 7:37 left in the third quarter. Play got chippy and the Celtics limited the Bucks' transition game.

They came up one basket short at the end.

Celtics: Coach Brad Stevens kept his starting five intact after the team never recovered from a disastrous first quarter in Game 3. Stevens said he would likely only make a switch for matchup purposes. ... Boston ended with a 43-36 edge on the boards. ... Morris finished with 13 points and shot 4 of 14.

Bucks: Starting C John Henson missed a second straight game with a sore back. ...  The Bucks went with the same starting five as Game 3, with Zeller replacing Henson and Brogdon starting for Tony Snell.  ... Jabari Parker led a vigourous effort off the bench with 16 points and seven rebounds. Backup C Thon Maker blocked five shots and played most of the fourth quarter.

Game 5 is Tuesday at the TD Garden in Boston.

MILWAUKEE -- The Milwaukee Bucks take on the Boston Celtics in Game 4 Sunday at Noon at the BMO Harris Bradley Center. The Celtics lead the series 2-1.

HERE ARE FOUR THINGS TO WATCH DURING THIS GAME:

WTMJ (AM 620/FM 103.3) will have every game of this first round series with the call by longtime radio voice Ted Davis.