Five players the Bucks may take in Thursday's NBA Draft 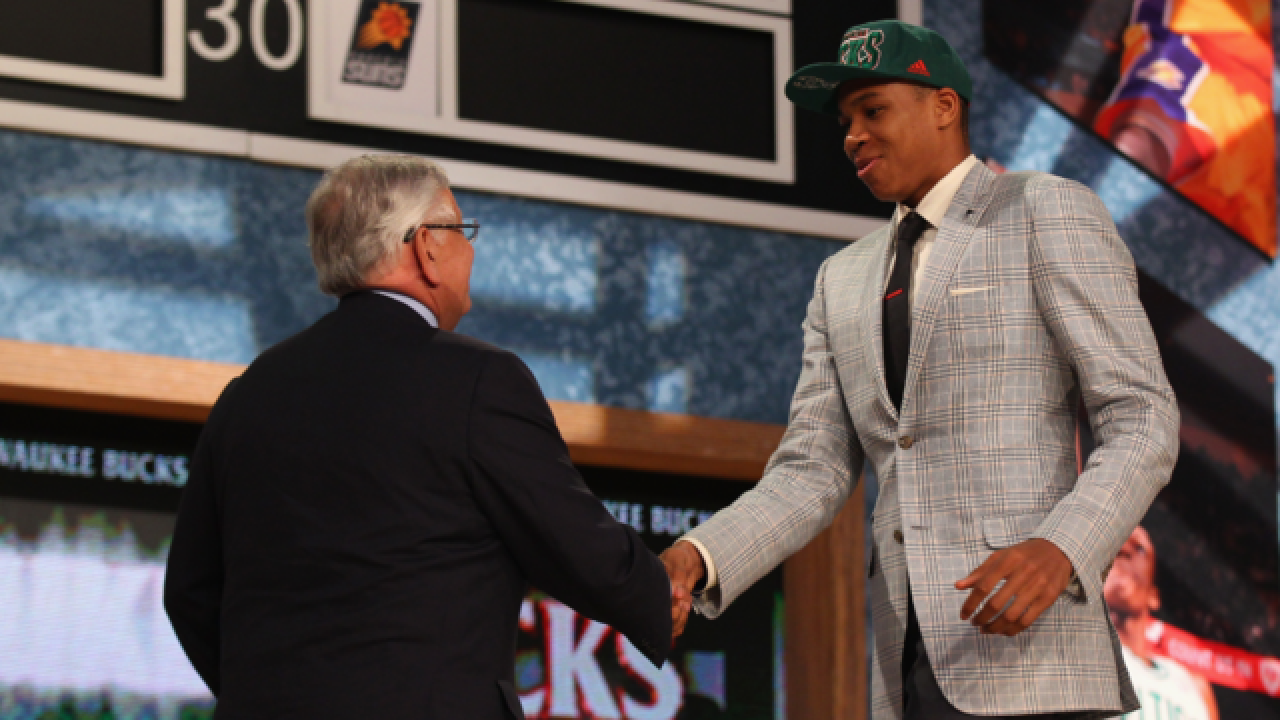 Image copyright 2013 Getty Images. All rights reserved. This material may not be published, broadcast, rewritten, or redistributed.

MILWAUKEE -- The 2018 NBA Draft is set to take place this Thursday, June 21st at 7:00 p.m. at the Barclays Center in Brooklyn. Here are five players the Milwaukee Bucks could be interested in taking with their first-round pick.

The Bucks desperately need another shooter, perimeter defender and a rebounder. Perhaps a true center is at the top of the list, but unfortunately, the ones worth taking in the first round are all projected to go top 12. That means the Bucks need to focus on the other two needs, a shooter and perimeter defender.

The Bucks need shooting and more consistency at the guard position. Eric Bledsoe, regarding any possible trades, will be given a shot to prove he's the answer at one of the guard spots, but with his inconsistency on both sides of the ball last year, the Bucks may look to add Brown. Brown is a defensive-minded player who is versatile. At 6'7" feet tall, technically he could play positions 1-3 in the NBA. It would also make him one of the largest guards in the entire league.

Here's a name Marquette fans have come to know the last couple of seasons. DiVincenzo is a two-time National Champion at Villanova, mainly because of his personal performance in this year's National Championship. The 6'5" guard can shoot from anywhere and shot 40 percent from three-point land last season, something the Bucks need desperately. Add his winning culture and Villanova's recent success of draftees, and it might be worth pursuing.

You're probably thinking, "who is this guy? The Bucks better not bother with him." Well, Okobo is a primary ball-handler and can shoot very well. It is still uncertain whether Mike Budenholzer is going to want Giannis Antetokounmpo running the point, or playing in the post, but chances are it will be both. If Antetokounmpo is not the primary ball-handler, Okobo could be given a shot. There may be better options on the table at the time, but there is no question that the Bucks need another guard to rely on after watching Tony Snell and Matthew Dellavedova struggle.

Although the Bucks didn't draft him, the current player on their roster from Texas A&M happens to be their best shooter. That someone would be Khris Middleton. Aside from that, Williams is a 6'10" center that is known for rebounding and shot-blocking. He lead his team to the Sweet-16 last season and could hold his own at the five in the NBA. He is projected to go higher than pick 17, but with the depth in this draft, anything is possible.

This one is a stretch for pick 17, but Bridges would be a perfect fit for the Bucks. He is explosive, quick, athletic and can shoot at a high level. Bridges is 6'6" and would make an immediate impact on the roster. With the way the NBA is going with all of the pick-and-roll switches, having guys like Bridges and Antetokounmpo is vital. The two compare because of their ability to guard multiple positions. Obviously Bridges will have to prove himself, but this would be a home-run pick for Milwaukee. Jon Horst recently told ESPN Milwaukee reporter Eric Nehm, that they are looking for someone who can make an "immediate impact" on their roster.

With the Bucks recent draft woes in the mid-late first round, trading the pick might not be such a bad idea. Kemba Walker and Kawhi Leonard are the big names being mentioned around trade talks with Milwaukee, but it is all just rumors as of now. The Bucks attempted to acquire Walker at the deadline this year, but no deal was ever reached. Now that Charlotte has traded Dwight Howard away for Timofey Mozgov and two second-round picks, Walker could very well be the next piece to go. Eric Bledsoe has been mentioned in trade talks too. There are rumors saying he and Jabari Parker could be dealt in a package deal, along with pick 17 for Kawhi Leonard. The odds of this are slim because the Spurs will want Khris Middleton in any deal with Milwaukee. However, these two should be expendable because of injuries and inconsistencies.

Here was what he said when he was asked about the 2018 NBA Draft: pic.twitter.com/VXiqbM76QE