"He grew up, and is growing up, to be a man in the City of Milwaukee." 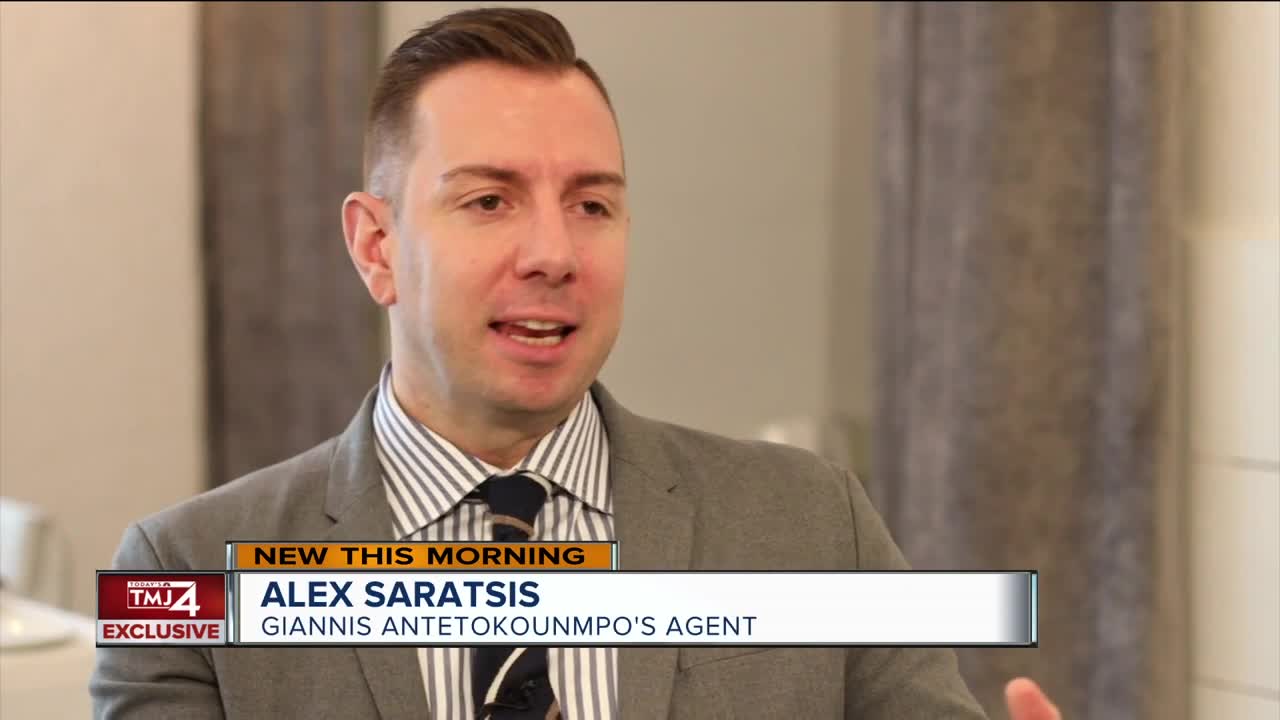 So to secure a sit-down interview with one of the busiest men in basketball, TMJ4 News decided to meet up with Saratsis, who is based in Chicago, for a Greek lunch at Avli River North.

MILWAUKEE — Bucks superstar Giannis Antetokounmpo will lead his team out onto the hardwood in Chicago as one of two captains in the NBA All Star Game this weekend.

The reigning MVP is having another monster season: averaging 30 points and 13.5 rebounds per game, while the Bucks, at 46-8, boast the best record in the NBA.

Just like his star client Giannis, agent Alex Saratsis, of Octagon Basketball, was born in Greece.

So to secure a sit-down interview with one of the busiest men in basketball, TMJ4 News decided to meet up with Saratsis, who is based in Chicago, for a Greek lunch at Avli River North.

Saratsis said, at times, he still thinks of Giannis as the skinny teenager who arrived in the NBA fresh from Greece after the Bucks selected him in the 2013 NBA Draft.

"I've known him for so long, that I still see him as this young kid still fighting to find his way," Saratsis said.

"My job is to help brand him, and to expand his brand and his reach," he added. "But at times, it's hard for me to say, 'Wow, he's a global superstar,' because I'm so close to him."

"When was the moment you realized [Giannis] was becoming huge all around the world?" asked TMJ4 News' Pete Zervakis.

"After his third season, we were in Taiwan and I asked him how he felt about the season, and he told me by the time he was in year four, 'I don't think anybody will be able to stop me at this point.' He'd started to figure things out, and he had this determination in his eye," Saratsis said. "At that point, I said, 'Okay, this kid is going to be - on the court - incredible.'"

ESPN last year named Giannis one of the world's 100 most famous athletes. His jersey is currently the second best seller in the NBA.

Saratsis said he thinks the biggest reason for his client's global stardom and name recognition is his play on the court. But he said Giannis' personality, and life story, have also contributed and made him one of the most marketable athletes of this generation.

"He's someone people feel they know, they know his story," said Saratsis of Giannis, who grew up in tight-knit but poor family in Greece. "You could point to so many people around the world that grew up in that environment that he did, and that want to be successful, and they look up to him."

"It was really hard," Saratsis said. "Because Milwaukee is a smaller market, because Giannis wasn't playing, because people couldn't pronounce his name."

"There were all these things about, 'Hey, let's joke about how to pronounce his name,' and I mean, to me, it was almost insulting," Saratsis said. "That's your name, your family given name, and people are making fun of how to pronounce it."

"They sometimes couldn't even pronounce Giannis right," he added. "So that was a really big challenge for us."

"I remember one of his first games at the BMO Harris Bradley Center, and it must not have even been 1/3 full," Saratsis said.

He acknowledged Giannis probably missed out on some endorsement opportunities playing in one of the NBA's smaller markets, but he said that problem evaporated as Giannis became one of the NBA's best players.

As his game blossomed, so did the Bucks franchise. The team advanced to the Eastern Conference Finals last spring, and now plays in perhaps the league's best arena: Fiserv Forum.

"Do I think Giannis accelerated that growth? Absolutely," Saratsis said. "But I wouldn't attribute it entirely to him. As an organization, I think the Bucks have done a wonderful job.

Saratsis says his client is "pretty boring" by the standards of a basketball superstar. He trains at the Bucks practice facility several times a day, and his ideal night out is going to the movies with his family.

In that sense, Saratsis says playing in a smaller city like Milwaukee "has been great for him."

"He came in as an 18-year old kid who didn't speak the language," Saratsis said. "If you think about it, he grew up and is growing up to be a man in the City of Milwaukee. I think he's always going to appreciate that."

"Giannis believes in loyalty, he believes in the people who've been there with him from the beginning, and I think he feels that kinship to the city because they have really helped raise him," he said.

In an effort to keep their star in Milwaukee, the Bucks are expected to offer him a supermax contract this summer.

"Is he a client you could see staying with one team for his whole career?" asked Zervakis.

"Yeah, I think so. Obviously everybody talks about his impending free agency, and I think everything is open," Saratsis said. "I think he's someone who could easily say, 'I'd like to be in Milwaukee my entire career.' I think he's also someone who, depending on how the team does, could say, 'I need a change.' But for him, staying is absolutely a viable option."

Saratsis said it's tough to get any more specific than that, because the Bucks' star doesn't want to talk or even think about his contract situation until after the season.

"He won't let me think that far ahead," Saratsis said. "He'll say, for me, my focus right now is to win a championship."

"He's absolutely a once-in-a-generation talent," Saratsis said. "I think, once he's done playing in the NBA, there's going to be a generation that grew up watching him that's going to lament not having had more of an opportunity to watch Giannis play."