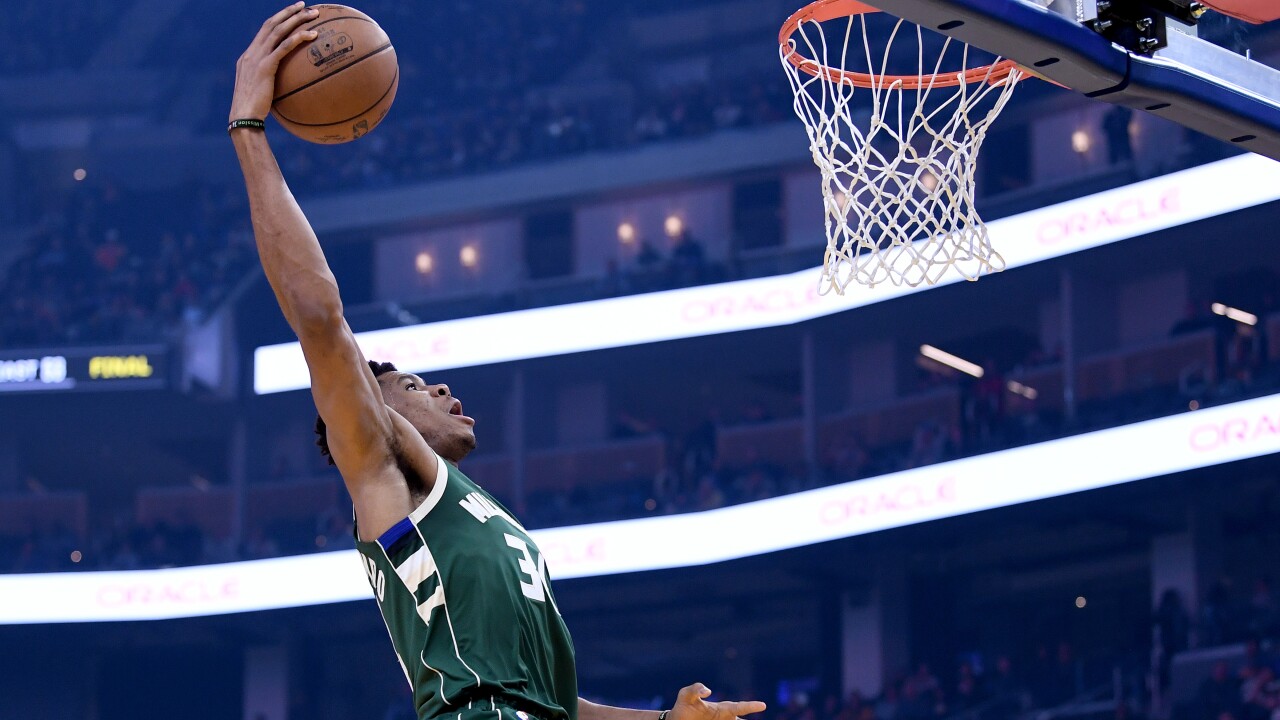 Thearon W. Henderson/Getty Images
SAN FRANCISCO, CALIFORNIA - JANUARY 08: Giannis Antetokounmpo #34 of the Milwaukee Bucks goes up for a slam dunk against the Golden State Warriors during the first half of an NBA basketball game at Chase Center on January 08, 2020 in San Francisco, California. NOTE TO USER: User expressly acknowledges and agrees that, by downloading and or using this photograph, User is consenting to the terms and conditions of the Getty Images License Agreement. (Photo by Thearon W. Henderson/Getty Images)

PORTLAND, Ore. (AP) -- The Milwaukee Bucks have bigger goals than a 70-win season, though their star player isn't taking their phenomenal start for granted.

Eric Bledsoe added 29 points for the Bucks, who made 14 3-pointers led by Middleton's 4-for-4 performance.

Antetokounmpo was asked afterward if the Bucks have changed their mindset from the hunters to the hunted.

"We're still hunting," the reigning MVP said. "Obviously teams are going to come and play hard against us. But at the end of the day we have to be the hunters. We have to have that mentality. That's what we've been doing. We've won 35 games and played 41. That's crazy."

But Middleton downplayed it.

"You can't win a championship in the regular season," Middleton said.

Antetokounmpo had 13 points and seven rebounds in the first quarter alone and Milwaukee went on to its third straight win. That matched his entire point total from Friday night's win over Sacramento.

"Usually when I'm not aggressive the previous game, I come out the next game more aggressive," Antetokounmpo said. "I can remember since I started playing basketball and that's what we did tonight."

Antetokounmpo also hit multiple 3-pointers for the 18th time this season, something he did only 13 times all of last season.

"I'm comfortable, but I have to keep getting better," he said.

Lillard finished with 26 points while CJ McCollum scored 20 and Carmelo Anthony had 19 points and 11 rebounds, but Portland lost for the eighth time in 10 games.

The Bucks pushed their lead to as high as 17 multiple times in the third quarter and held a 97-80 lead after the period thanks to a tip-in by Pat Connaughton before the buzzer.

A three-point play by Bledsoe pushed the Bucks lead to 116-94, their biggest of the game. A couple of possessions later, coach Terry Stotts removed the Blazers starters from the game.

Bucks: Though Antetokounmpo is the biggest reason for the Bucks' NBA-best 35-6 record, the Bucks outscore their opponents by 8.3 points per 100 possessions when the MVP sits, according to NBA.com. "I think (Bucks coach Mike Budenholzer) does a really good job of integrating all his players," Stotts said. "They have interchangeable parts, they pass, they shoot, they're unselfish, they have rim protection."

Trail Blazers: The Blazers, who are dealing with a host of injuries, were forced to deal with illness on Saturday night. Starting center Hassan Whiteside missed the game after playing through an illness in Thursday's road loss to the Minnesota Timberwolves. McCollum missed a Jan. 5 game with an illness but according to Stotts, Whiteside was the only player still affected by the sickness that spread around the team over the past week. Anthony Tolliver started in Whiteside's place, finishing with 11 rebounds and seven points in 28 minutes.