Restaurant did not have enough room to seat him

Antetokounmpo was ready to celebrate with a victory taco dinner down the road from the BMO Harris Bradley Center at the restaurant. However, they were too busy and did not have enough room to seat him in a timely fashion. Patrons inside the restaurant got wind of this and were outraged -- and so was social media.

Morgan Sokany was inside the restaurant when Giannis entered. He tweeted a photo of Giannis waiting to be seated and it went viral. It ended up getting hundreds of retweets and likes -- with people furious Giannis wasn't seated in a timely fashion.

At @BelAirCantina on water street and just watched @Giannis_An34 wait for a table for 10 minutes and no one helped him so he left... Dude just won Milwaukee a playoff game! Get him some service pic.twitter.com/hcjsJfThiA

According to Sokany, he thought no one greeted Giannis when he came in. He says, Antetokounmpo waited for 10 to 15 minutes before leaving. He says, some other patrons took matters into their own hands to try and get Giannis a seat.

"People are wondering why he's not seated," Sokany said. "Everyone was busy. It's not like people were sitting around. People started laughing but a few people started getting angry like hey, it's funny but let's get this guy a table. One group at the bar started to bus tables themselves to make room for him. He was like hey guys, let it go. It's not a big deal. That was the biggest takeaway. Just what an average guy he is."

Bel Air wanted to clear the air that they didn't acknowledge Giannis when he came in. They posted a screenshot of surveillance video where a manager approached Giannis when he got there, telling him about the wait. 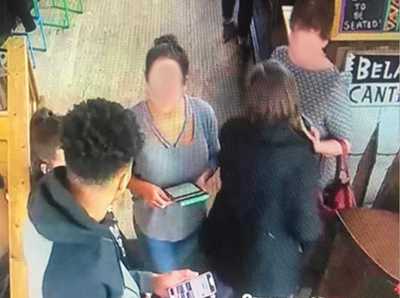 On Monday, the restaurant issued this statement to TODAY'S TMJ4 about the incident:

“We appreciate everyone’s passion for treating Giannis and all customers with great customer service. It is something we strive to do every day. We reviewed the entryway footage from last night, and we are proud to reaffirm that Giannis was promptly greeted by our manager and told the wait time. Giannis has been a customer many times and he has graciously accepted our apology for not being able to seat him and other customers more quickly last night.  Our focus is now on supporting our team on this playoff run. Go Bucks.” #TacoBoutAMisunderstanding

Sunday night after the incident, BelAir also tweeted an apology and said because of the Bucks game and warm weather, they were extremely busy.

We are very sorry we weren’t able to seat @Giannis_An34 in as timely of a manner as we would have hoped. The @Bucks big win, thanks to his tip in and the team’s great play, combined with today’s spring weather had people turn out in droves to celebrate and we had quite a wait.

Giannis still got his victory dinner -- and also went from wanting tacos to pizza. Dimoda Pizza, just down the street, posted a photo of Giannis after his meal there.

"Our guests were really happy when he came in," Drew Duester, co-owner of Dimoda Pizza said. "They all stood up and clapped."

Dimoda is offering a Greek pizza option for the duration of the playoffs thanks to the visit by Antetokounmpo. They'll also have BOGO pizzas after every Bucks playoff win.

Giannis also caught wind of the social media outrage. His girlfriend later tweeted out a photo of him saying no hard feelings.

Its all good, much love for you guys ❤️ also thanks to all of the concerned fans I appreciate your support @BelAirCantina pic.twitter.com/gBKSV3CTGJ

BelAir also wants to make things right with all of Milwaukee after this debacle. The restaurant says if the Bucks win the next two and take the series, they'll give a free taco with purchase to everyone on Friday. And they'll hold a table just for Giannis.

win the series Thursday night in Milwaukee, we will provide all @Bucks fans with a free taco with any purchase all day Friday at all our locations! #GoBucks #BucksIn6

He said many call ahead, but some just walk in.

“When we know it’s a busy night, we’ll block off certain spots,” Shaikh said. “We’ll have certain tables blocked off for that reason.”

Shaikh, who said he’s friends with BelAir Cantina’s owners and is a fan of their restaurants, said he sympathizes with their challenge of finding Giannis a table during a busy time.

“It could be they were scrambling to find a table for him and that, in that time, he might’ve left,” Shaikh said.

“One time, we had a superstar player walk in and I had just sat down with my family - my wife and kids - to eat,” he said. “About five minutes later, I told them we were going somewhere else!”

Shaikh said all of his previous interactions with Giannis at Carnevor have been very positive.

“He’s not the guy that walks in to a restaurant and says, ‘Hey, I’m Giannis. Give me a table,’” Shaikh said.

Not surprisingly, Giannis downplayed the incident during an interview with local media in Boston Monday afternoon.

“I did not find that a big deal,” the superstar said.

“I’ve been in the restaurant a lot of times, they’re really good people and I know the owners, and I’ll be there again,” Giannis added. “They offered me a free meal, so I’m going to take that too.”

He said thinks it was somewhat blown out of proportion by national news outlets that picked up the story.

Henning thinks most Bucks fans are focused on the team’s ongoing playoff series against the Boston Celtics.

“The Bucks have their best opportunity to advance in the playoffs in almost two decades,” Henning said. “Everything else is white noise.”