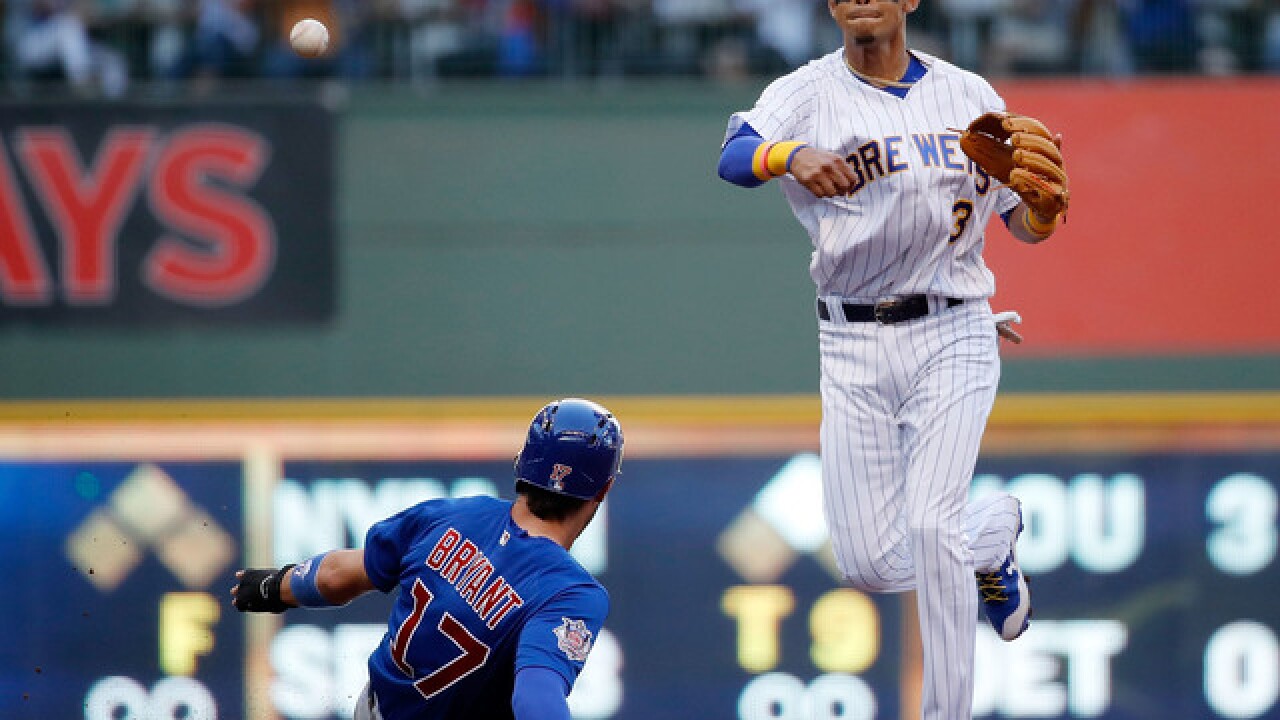 Image copyright 2017 Getty Images. All rights reserved. This material may not be published, broadcast, rewritten, or redistributed.
Stacy Revere
<p>MILWAUKEE, WI - JULY 29: Kris Bryant #17 of the Chicago Cubs is forced out at second base as Orlando Arcia #3 of the Milwaukee Brewers turns a double play during the first inning of a game at Miller Park on July 29, 2017 in Milwaukee, Wisconsin. (Photo by Stacy Revere/Getty Images)</p>

Post-all star break baseball has not been kind to Milwaukee. The Brewers are 6-11 since the midsummer classic, and have watched the Chicago Cubs race past them in the standings. The defending champions are 14-3 since the break and flipped a 5.5-game deficit into a 2.5-game lead.

Still, the Brewers aren't dead yet! Here are three reasons why Milwaukee could still grab its first NL Central crown since 2011.

1. The Brewers' offense is ice cold.

Milwaukee's first-half surge was largely propelled by its booming lineup. Before the all-star break, the Brewers ranked seventh in baseball with a .777 OPS; since, the offense has collapsed, and owns the second-worst OPS. Milwaukee has scored three runs or less in 13 times since the break, losing 10 of those games.

Luckily, it's hard to see it getting any worse than this. Jonathan Villar and Orlando Arcia have hit so poorly of late that getting to merely average would be a massive upgrade. Center field has also been a black hole; Keon Broxton, Lewis Brinson, Brett Phillips, and others are struggling to find their footing. Any production at all would be a marked improvement.

Travis Shaw, Domingo Santana, and Ryan Braun have more or less held onto their first-half numbers. The Brewers' offensive consistency really just comes down to minor improvements from a few fringe players.

Yes, adding Quintana makes a substantial difference. But after posting a disappointing 4.08 ERA in the first half, the Cubs' starters have a sparkling 2.98 ERA over their last 17 games.

It is unreasonable to expect the Cubs' pitching to maintain this pace though. Jon Lester, John Lackey, and Jake Arrieta have all improved their ERA's by more than one run in the second half even though they all are on the wrong side of 30 years old. While they may not completely crater, it is extremely unlikely all three pitchers hold onto their recent uptick in performance.

On the other side, the Brewers rotation might be ready to take another leap forward. Chase Anderson and his 2.89 ERA should be back by mid-August, and Matt Garza could return as soon as Thursday. In their absence, Junior Guerra, Michael Blazek, et al. have imploded on the mound, most notably with Blazek's contributions to the Brewers 15-2 loss in Washington. Acquiring Quintana is certainly a splashier move for Chicago, but adding Anderson and Garza might be an even bigger upgrade for GM David Stearns.

3. Chicago has feasted on easy schedule during this run.

Including the Brewers, the Cubs have played six teams in the second half, four of which are that are under .500. Chicago took advantage of its generous schedule (which the Brewers did not), but beating up on four cupcakes does not mean the Cubs have found themselves. It just means they were better than some of the worst teams in the National League.

Over the next two weeks, the Cubs have a much tougher schedule than Milwaukee. The Brewers have two more games at home against the slumping St. Louis Cardinals, before three with Tampa Bay, four against the sliding Twins, and then five home contests with Cincinnati and Pittsburgh. The Cubs are forced into two more games with the Diamondbacks, three against Washington, three at San Francisco, and then a three-gamer at Arizona.

The schedule gods are giving the Brewers a window right now. It is crucial for them to take advantage.