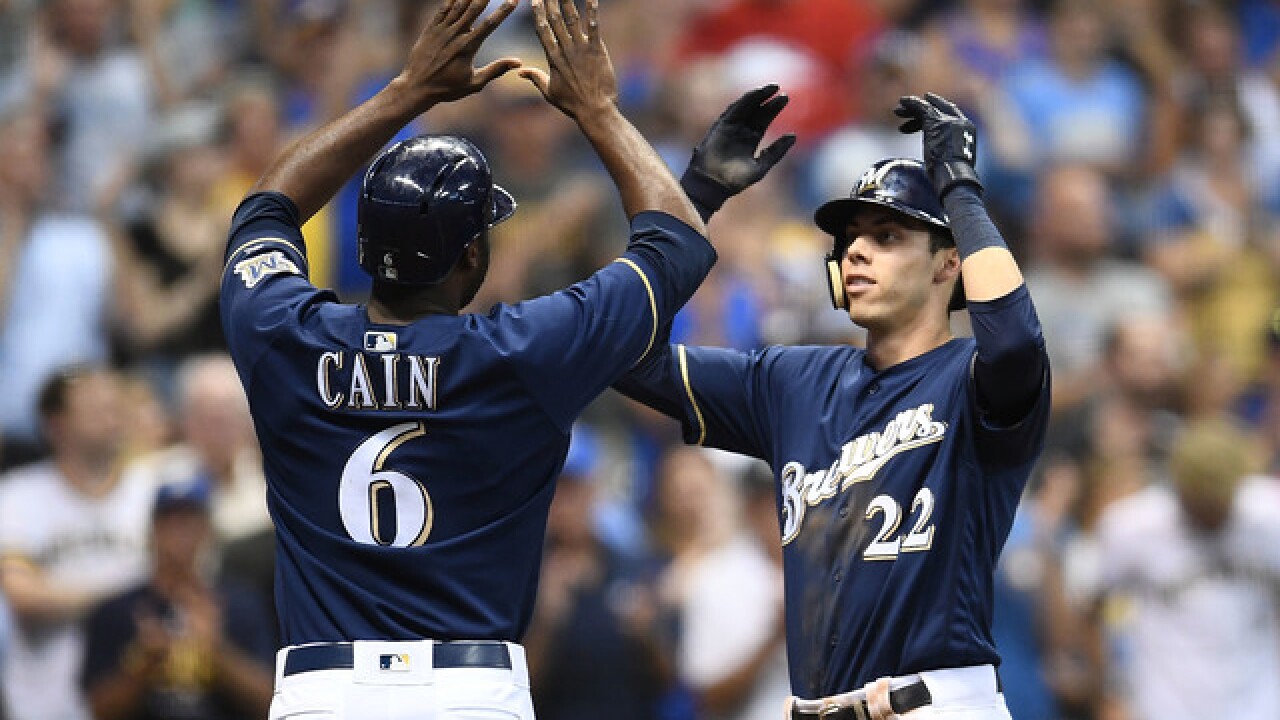 Copyright Getty Images
Stacy Revere
<p>MILWAUKEE, WI - JULY 24: Christian Yelich #22 of the Milwaukee Brewers is congratulated by Lorenzo Cain #6 following a two run home run against the Washington Nationals during the fifth inning of a game at Miller Park on July 24, 2018 in Milwaukee, Wisconsin. (Photo by Stacy Revere/Getty Images)</p>

MILWAUKEE (AP) — Lorenzo Cain stood on third base watching teammate Tyler Saladino lift a fly ball to shallow left-center with one out in the 10th inning, and he was certain of one thing. He was heading home.

"Honestly, it didn't matter. I was going regardless," Cain said. "I was going to make him throw me out and, fortunately, he made a wide throw and I was able to score easy."

Cain led off the 10th with single up the middle off Matt Grace (0-1), the sixth Nationals pitcher. He moved to third on Christian Yelich's single to right. After an intentional walk to Jesus Aguilar, Grace struck out Travis Shaw, setting the stage for Saladino, who faced a five-man infield. Cain scored standing up as left fielder Juan Soto's throw sailed off line.

Bases full of All-Stars in the bottom of the 10th... #ThisIsMyCrew pic.twitter.com/FrkNXzx2dj

"(Grace) has got a really good sinker so I was just trying to get something I could get out to the outfield," Saladino said.

Dan Jennings (4-3) got the win after entering with two outs in the 10th and picking off pinch-runner Trea Turner, who was benched to start the game for failing to hustle during an at-bat in Monday night's game.

The Brewers pulled within 1 ½ games of first place in the NL Central after division-leading Chicago lost 5-1 to Arizona.

Adam Eaton hit a three-run homer for the Nationals, who also played without Bryce Harper in the starting lineup because of illness. Washington led 4-0 before Milwaukee rallied, sending the Nationals to their fifth loss in seven games.

"It's a tough loss," Grace said. "These are obviously important games."

The Brewers have won three of four since a seven-game skid.

Washington took the lead on Ryan Zimmerman's run-scoring double with two outs in the first off Junior Guerra, who had been on the disabled list since July 14 with right forearm tightness before being activated prior to the game.

The Nationals extended the lead to 4-0 in the second on Eaton's drive to center.

Guerra started a fifth-inning rally. He led off with a double off Hellickson, his second of the game, moved to third on a passed ball and scored on Eric Thames' groundout. Yelich hit a two-run homer into the second deck in right with one out to cut the Nationals' lead to 4-3.

Milwaukee tied it in the seventh. Ryan Braun led off with a pinch-hit double and later scored on Cain's single.

Wilmer Difo started at shortstop in place of Turner, who angered Nationals manager Dave Martinez on Monday night for failing to run out of the batter's box after a bunt in the fourth inning. Turner said he put the bat up in "self-defense" because he thought he was going to be hit by the pitch and inadvertently bunted the ball.

"I felt after yesterday that he probably needed a day off," Martinez said. "Let him ponder about it. We need Trea, and he's a very good player. I don't ask these guys to be perfect, but I want them to be present."

Guerra led off the third with a double for his first hit of the season. He had been 0 for 22 with 10 strikeouts prior to the at-bat. He doubled again in the fifth. Guerra, who was hitless in 16 at-bats last season, now has four extra-base hits in 75 career at-bats. He had two doubles in 2016.

Nationals: Martinez said Harper has "a little stomach issue going on." Harper struck out looking as a pinch-hitter in the seventh.

Nationals: Tanner Roark (3-12, 4.87 ERA) has surrendered one earned run in 14 innings with 17 strikeouts in his last two starts at Miller Park.

Brewers: Freddy Peralta (4-1, 2.65) will make his eighth start of the season in Wednesday's series finale. Opponents are batting .144 (18-for-125) against him. Peralta last started for the Brewers on July 11.