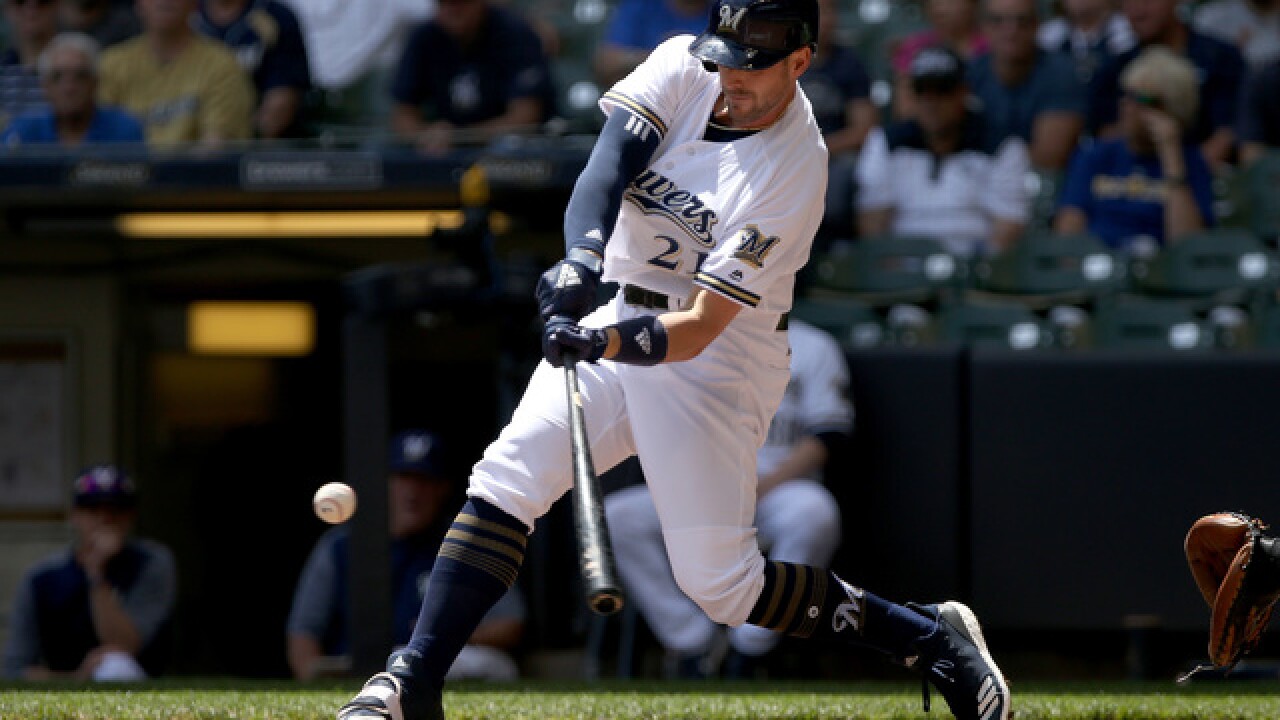 Copyright 2018 Scripps Media, Inc. All rights reserved. This material may not be published, broadcast, rewritten, or redistributed.
Dylan Buell
<p>MILWAUKEE, WI - MAY 23: Travis Shaw #21 of the Milwaukee Brewers hits a home run in the fourth inning against the Arizona Diamondbacks at Miller Park on May 23, 2018 in Milwaukee, Wisconsin. (Photo by Dylan Buell/Getty Images)</p>

MILWAUKEE (AP) — Travis Shaw hit a three-run homer and Jesus Aguilar had a go-ahead, two-run single during a seven-run fourth inning to help the Milwaukee Brewers beat Arizona 9-2 Wednesday and send the Diamondbacks to their seventh straight loss.

Brent Suter (4-3) allowed two runs and four hits in 5 2/3 innings as the NL Central-leading Brewers moved a season-high 12 games over .500. Milwaukee's 31-19 start is the team's best over 50 games in franchise history.

Arizona has lost 13 of 14, falling out of the NL West lead while scoring just 26 runs in that span. The three games marked the Brewers' first sweep of the Diamondbacks since June 2-4, 2008.

Suter allowed solo home runs by Paul Goldschmidt and John Ryan Murphy in the second inning in his first start against the Diamondbacks.

Aguilar hit an RBI single in the first, then singled for a 3-2 lead in the fourth. Shaw followed with his 12th home run this season, and Tyler Saladino greeted Fernando Salas with a liner that center fielder Chris Owings misplayed as two more runs scored.

Saladino homered leading off the seventh.

Diamondbacks: OF Jarrod Dyson got a day off. "It's hard to take Jerrod out of the lineup, but he needs rest manager Torey Lovullo said. Dyson is hitting .387 in his last 11 games.

Brewers: 1B Jesus Aguilar was back in the lineup after a day off. Ji-Man Choi started at first base in his place Tuesday night.

Diamondbacks: LHP Patrick Corbin (4-1, 2.60 ERA) makes a road start at Oakland in the opener of a weekend series.

Brewers: RHP Zach Davies (2-3, 4.24 ERA) returns from the 10-day DL (right rotator cuff inflammation) for his seventh start of the season and second against the New York Mets. He lost 6-5 on April 13 at Citi Field, allowing two home runs by Todd Frazier.