Miley back to NLCS hill, Brews try to deny Dodgers 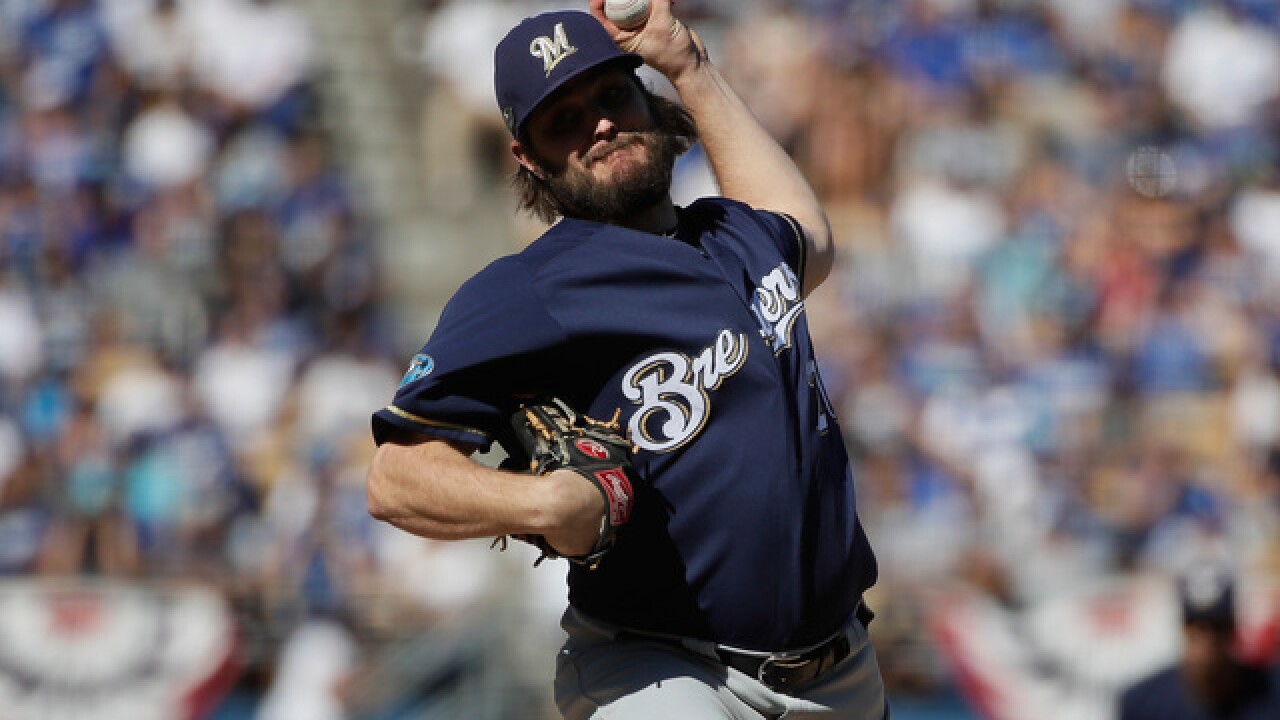 And this time, the Milwaukee Brewers left-hander figures to seeing more than one batter in his next start in the NL Championship Series.

It comes on Friday night when Miley will try to help the Brewers stave off elimination, down 3-2 to the Los Angeles Dodgers.

Miley goes back to the hill two days after being lifted after facing leadoff hitter Clay Bellinger in Game 5 in a designed move by manager Craig Counsell. The Dodgers are going with left-hander Hyun-Jin Ryu in a rematch of the Game 2 starters.

"I think I'll be fine. Just got to go out and make pitches," Miley said at Dodger Stadium after the Brewers fell 5-2 Wednesday.

The last pitcher to start back-to-back games in the same postseason series was George Earnshaw of the Philadelphia Athletics in the 1930 World Series, according to STATS. Earnshaw tossed seven shutout innings in Game 5 before pitching a complete game two days later, allowing one run in a win that took the series.

Can you top that, Wade?

"I started the end of an All-Star break and the other side of it," Miley said.

Not quite the same. Miley got the last start against the Dodgers, and was pulled after a five-pitch walk.

Reliever Brandon Woodruff did the bulk of the Brewers' initial "out-getting" after coming in to face the second batter, Justin Turner. Woodruff allowed three runs, two earned, along with five hits and a walk while fanning eight in taking the loss after going 5 1/3 innings.

Counsell explained that the unconventional move was an effort to get the best matchups. The Dodgers led off with lefty-hitting Clay Bellinger before going with three straight right-handers in the lineup. They had one other lefty in the starting lineup, power hitter Max Muncy.

Results were mixed. Los Angeles was held scoreless until the fourth, then broke through with five runs over the next three innings to move within one win of a return trip to the World Series.

This was the latest extension of the Brewers' pitching-by-committee strategy in the postseason. Milwaukee is playing to one of its strengths, which is a deep, hard-throwing bullpen. More teams around the league picked up on the maneuver after the Tampa Bay Rays started using bullpen days to get through some games this season.

When asked, Counsell said that he didn't think that lifting Miley after one batter broke down baseball norms or trust between opposing manager. He pointed to teams using pinch-hitters to replace a starter after just one at-bat, similar to what Dodgers manager Dave Roberts has done with the right-handed hitting David Freese and Muncy at first base.

"We're using our roster, we're using our full roster, I think that's what all teams are doing in the playoffs," Counsell said Thursday, a day off as the series shifts back to Miller Park.

Hinch noted that the Brewers used reliever Dan Jennings to start a game against the Cardinals on Sept. 24 before pulling Jennings after retiring the first batter.

"You're allowed to play all your players whenever you want to. So I think it's ludicrous to think that it's ... an ethical issue when you're playing your players how you want," Hinch added.

For the 31-year-old Miley, the back-to-back starts are another highlight in a turnaround season with Milwaukee. Miley was 5-2 with a 2.67 ERA over 80-plus innings in 16 regular-season starts after joining the club on a minor league contract in spring training.

He hasn't given up a run in 10 1/3 innings this postseason. If it were up to him, Miley would stay in as long as possible.

"Craig's the manager, he makes the final decision," Miley said this week, "but at the same time, you want to make it as tough on them as possible. We try to go out there and do the best we can."