Dirty player? 5 other times Manny Machado has been involved in questionable plays 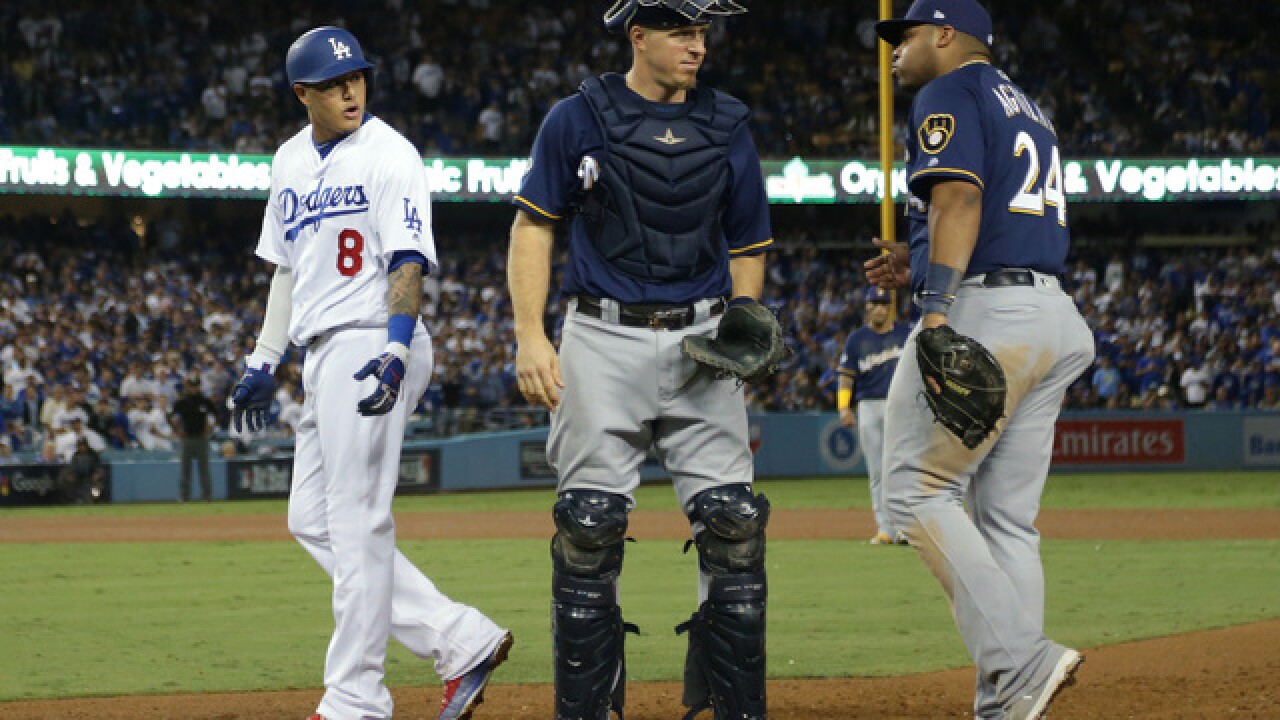 Copyright 2018 Scripps Media, Inc. All rights reserved. This material may not be published, broadcast, rewritten, or redistributed.
Jeff Gross
<p>LOS ANGELES, CA - OCTOBER 16: Manny Machado #8 of the Los Angeles Dodgers and Jesus Aguilar #24 of the Milwaukee Brewers exchange words after Machado's foot hit Aguilar's on his way to being thrown out at first base as catcher Erik Kratz #15 of the Milwaukee Brewers looks on during the tenth inning of Game Four of the National League Championship Series at Dodger Stadium on October 16, 2018 in Los Angeles, California. (Photo by Jeff Gross/Getty Images)</p>

After Game 4 of the NLCS, Christian Yelich did not hide his feelings for Dodgers' shortstop Manny Machado after a controversial play in the 10th inning. Machado seems to kick Brewers' first baseman Jesus Aguilar on purpose.

Yelich responded by calling Machado a 'dirty player.' The NL MVP-in waiting also brought up the fact that this isn't Machado's first offense. This led us to wonder - has Machado really been involved in other questionable plays?

Here are the five incidents that might support Yelich's case - you be the judge.

In 2016, when Machado was still a member of the Baltimore Orioles, he was hit by Ventura. It was a pretty normal play, but the two had previous beef with each other, which led to Machado charging the mound and fighting the pitcher. After Ventura's death in 2017, Machado did send his sympathies to Ventura's family.

2. His slide into second base in Game 3 of the NLCS

Just a game before the Aguilar incident, Machado was under the Brewers' skin after his slide into second base to break up a double play.  Whether you think the umpires got it right or not, the play was ruled a violation after replay.

.@Brewers challenge call that Manny Machado did not violate slide rule at 2B in the 4th; call overturned, violation.

3. His slide into second base against the Boston Red Sox in 2016

To break up another double play, Machado slid into second base with his legs in full extension to take out Xander Bogaerts.

Against the Red Sox (again) and with another slide into second (again), Machado cleated Pedroia in the back of the leg, resulting in Pedroia's exit from the game. This led to Machado being thrown at in the very next game.

5. He tried to throw his bat at a pitcher

With his team down 10-0 against the Oakland A's in 2014, Machado showed frustration after he attempted to swing at a pitch from A's pitcher Fernando Abad, letting go of his bat in an attempt to hit him. Thankfully the bat sailed over to the third base foul line away from everyone.