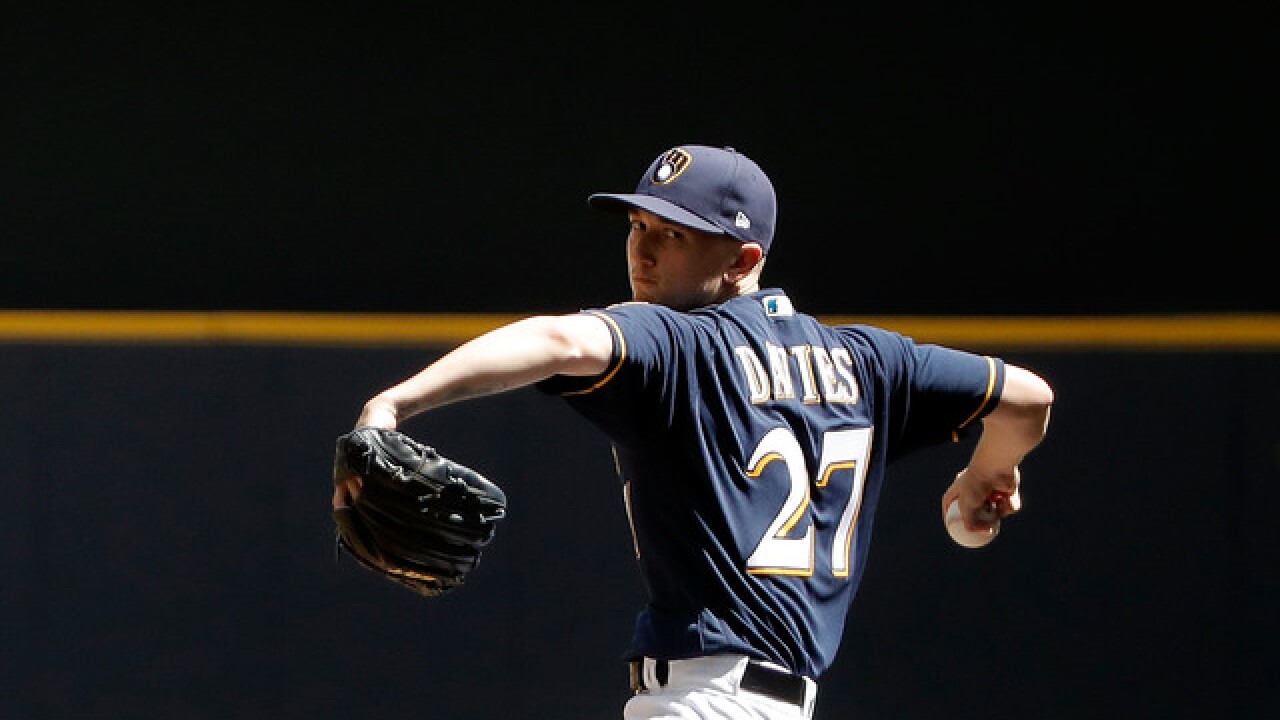 Copyright Getty Images
Stacy Revere
<p>MILWAUKEE, WI - JULY 30: Zach Davies #27 of the Milwaukee Brewers throws a pitch during the sixth inning of a game against the Chicago Cubs at Miller Park on July 30, 2017 in Milwaukee, Wisconsin. (Photo by Stacy Revere/Getty Images)</p>

Caratini homered to straightaway center off a 1-2 fastball from Zach Davies (12-5) with one out in the seventh for a 3-2 lead, delighting the bevy of Cubs fans who made the trek north from Chicago. The Cubs took two of three games in an important series at Miller Park.

With the non-waiver trade deadline looming Monday, the Cubs increased their lead in the National League Central over the second-place Brewers to 2 1/2 games.
Lackey (8-9) struck out seven and allowed five hits over six innings, including Domingo Santana's game-tying, two-run homer in the sixth that just landed beyond outfielder Jason Heyward's outstretched glove in the right-field corner.

Caratini gave the Cubs the lead for good an inning later. Kris Bryant added an insurance run in the eighth after hitting a solo homer that caromed off the left-field pole off of reliever Jacob Barnes.

Lackey won his third straight start, while Wade Davis pitched a scoreless ninth for his 22nd save.
Davies allowed seven hits and three runs over an otherwise effective seven innings. The right-hander struck out seven and gave up his first earned run since July 14 on Willson Contreras' infield single with two outs to open the scoring in a two-run sixth.

The Brewers optioned opening day starter Junior Guerra to Triple-A Colorado Springs and selected the contract of left-handed reliever Wei-Chung Wang, who was 5-1 with a 2.09 ERA at Triple-A. Guerra has struggled after leaving his opening day start with a calf injury. The right-hander was 1-4 with a 4.96 ERA after returning from the disabled list on May 26.

Cubs: Caratini started at first for star slugger Anthony Rizzo, who had back soreness following the Cubs' 2-1 win in 11 innings on Saturday night. The team is off on Monday, so manager Joe Maddon was hopeful that a two-day break would help Rizzo. "We'll call it day-to-day right now. There's no reason to push him right now," the skipper said.

Brewers: The demotion of Guerra, along with injuries to right-handers Chase Anderson (oblique) and Matt Garza (right leg strain), has left holes in the rotation. Anderson is due to throw another bullpen session on Tuesday or Wednesday, while manager Craig Counsell hoped to have a better idea on Garza's timeline in the next couple days.

Cubs: After a day off, LHP Jon Lester (8-6) opens a three-game series at home on Tuesday against the Arizona Diamondbacks. Lester is 3-0 with a 2.05 ERA in three starts since the All-Star break.

Brewers: Jimmy Nelson (8-5) takes the mound on Tuesday to open a three-game series against the St. Louis Cardinals. The right-hander is 0-8 with a 7.01 ERA in 11 career games against St. Louis.