Copyright 2018 Scripps Media, Inc. All rights reserved. This material may not be published, broadcast, rewritten, or redistributed.
Justin Berl
PITTSBURGH, PA - SEPTEMBER 20: Domingo Santana #16 of the Milwaukee Brewers rounds the bases after hitting a solo home run in the third inning during the game against the Pittsburgh Pirates at PNC Park on September 20, 2017 in Pittsburgh, Pennsylvania. (Photo by Justin Berl/Getty Images)

MILWAUKEE -- SportsCenter got their Domingos mixed up in a Sunday social media snafu.

The Yankees Domingo German threw six no-hit innings against the Cleveland Indians before turning the ball over to the Yankees pen and Dellin Betances.

But SportsCenter gave all the credit to Brewers outfielder Domingo Santana. 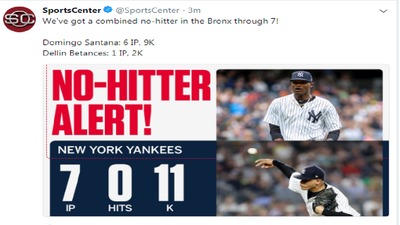 It took them about 20 minutes to delete the tweet.

Position players will sometimes take the mound in blow-outs, but Santana has never gotten the call from Craig Counsell in his four-year stint with the Crew.

But maybe it's time to give the 25-year-old outfielder a shot. He's got a heck of an arm out in right field.

As for German, he certainly deserves the credit for his great performance today. The rookie, making his major league starting debut, struck out nine without allowing a hit.

That is the first time that's ever happened in MLB history, per Katie Sharp.

Domingo translates to Sunday in Spanish, and German is keeping up the tradition of Domingos playing well on Sundays. Santana slugged nine of his 30 home runs in 2017 on Sunday.