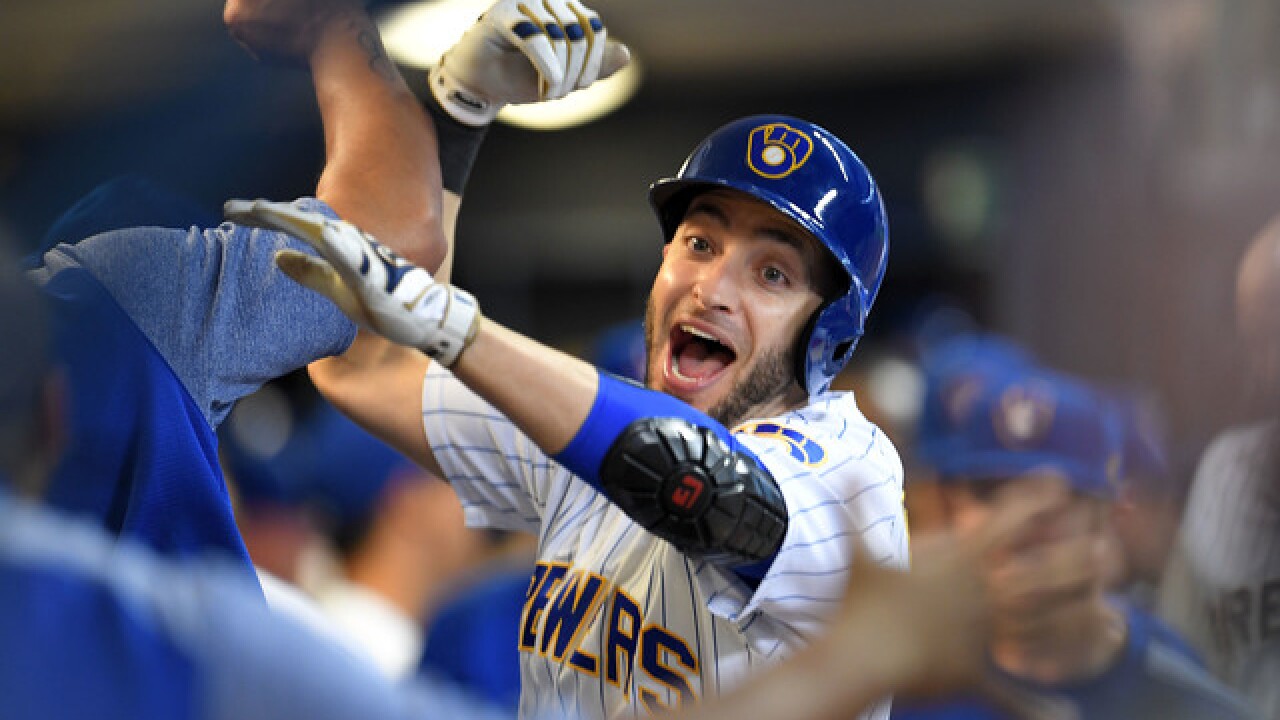 Copyright Getty Images
Stacy Revere
<p>MILWAUKEE, WI - SEPTEMBER 28: Ryan Braun #8 of the Milwaukee Brewers is congratulated by teammates following a solo home run against the Detroit Tigers during the eighth inning of a game at Miller Park on September 28, 2018 in Milwaukee, Wisconsin. (Photo by Stacy Revere/Getty Images)</p>

MILWAUKEE (AP) -- Ryan Braun thinks his luck may have changed at the plate.

The Milwaukee Brewers will take all the help they can get in chasing the NL Central-leading Chicago Cubs.

Braun hit two homers, including a go-ahead solo shot in the eighth inning that bounced off right fielder Nicholas Castellanos' glove and over the fence, and the Brewers beat the Detroit Tigers 6-5 on Friday night to stay one game back of Chicago.

"Certainly we've had more than enough discussion of how unlucky I've been this year, so maybe my luck is turning on that," Braun said. "Even if it doesn't, just getting lucky on that single scenario is obviously huge for us based on where we're at in the season."

Already assured a playoff spot, the second-place Brewers (93-67) are running out of time to catch the Cubs. Chicago beat St. Louis 8-4 on Friday afternoon.

The Brewers, who have won five straight, need the Cubs to lose at least once over the next two days to have a chance to win the Central.

Braun also hit a solo homer in the first and doubled in the fifth.

His good luck in the eighth came at the expense of Castellanos, who was tracking the high fly to the wall.

"If he doesn't put a glove on it, it doesn't go over the fence," Milwaukee manager Craig Counsell said. "We caught a break."

The ball bounced off Castellanos' glove raised over his head, then rolled over the top of the padded fence for a homer off Victor Alcantara (1-1).

"Warning track, saw it, jumped up. Felt it in my glove. My glove hit the top of the fence," Castellanos said. "When I came back down, it wasn't in my glove."

Jeremy Jeffress hit leadoff batter Jacoby Jones with a pitch in the forearm to start the ninth before retiring the next three Tigers for his 14th save.

The Brewers looked as if they had a crucial win locked up in the top of eighth with normally lights-out reliever Josh Hader on to pitch with a two-run lead.

But pinch-hitter Dawel Lugo turned on a 96 mph inside fastball for a two-run homer to left that tied the game at 5 with nobody out. Lugo's first major league homer came after leadoff hitter Jeimar Candelario was hit by a pitch in a call that stood after a replay review.

"A kid like that in this atmosphere and bangs one like that. It's just incredible. We did a lot of really, really good things tonight," Tigers manager Ron Gardenhire said. "Unfortunately, we lost the game."

Until then, the night belonged to Christian Yelich, the Brewers' MVP candidate who hit a two-run homer in the first after reuniting with his brother.

With Milwaukee trailing 3-0, Yelich hit his 34th homer of the season on the first pitch from Jordan Zimmerman after leadoff hitter Lorenzo Cain singled. Three batters later, Braun hit a solo shot to left to tie the game.

The Tigers couldn't muster any offense for a while after scoring three runs off Zach Davies in the first on three straight RBI singles from Niko Goodrum, Jim Adduci and James McCann. The runs came on bloopers or soft bouncers that found holes in the infield.

Davies and two relievers then combined to frustrate the Tigers for the next six innings, retiring 17 in a row during one stretch.

Lugo's homer off one of the toughest left-handed relievers in baseball gave the Tigers new life.

Joakim Soria (2-1) got the win after getting the last two outs of the eighth in relief of Hader.