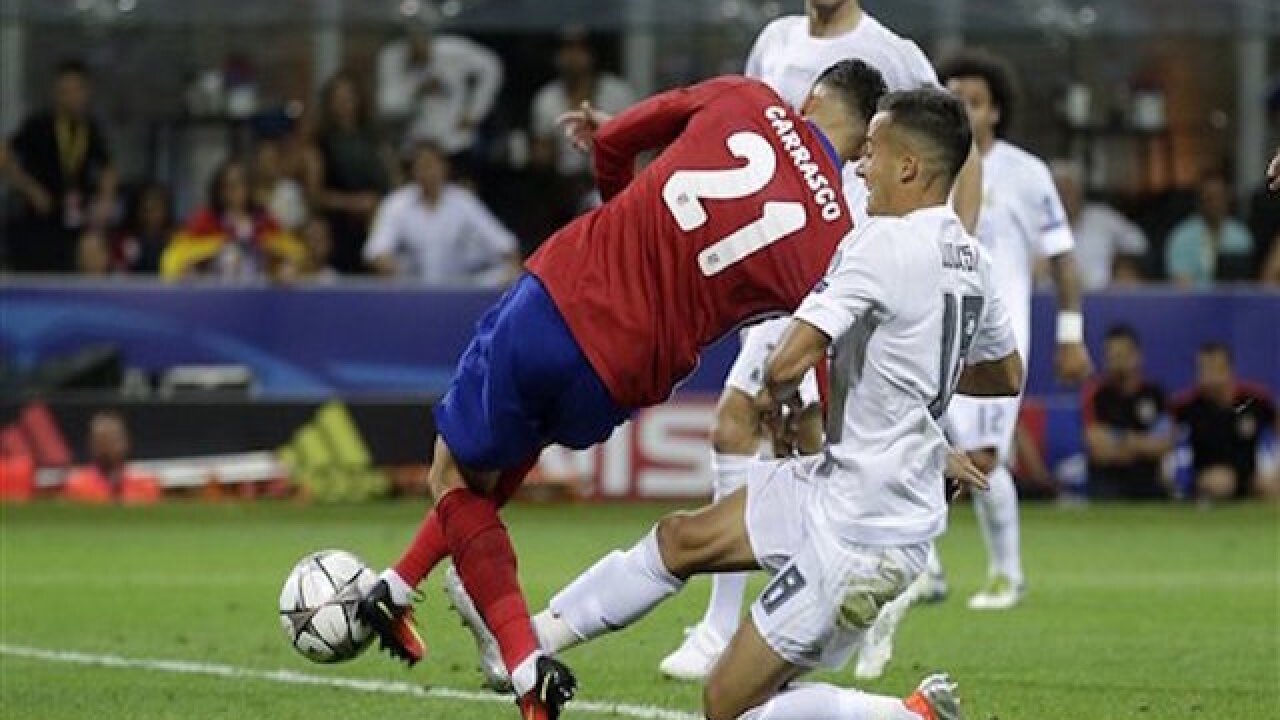 MILAN (AP) — Cristiano Ronaldo scored the winning penalty in a shootout to give Real Madrid victory over Atletico Madrid in the Champions League final which finished 1-1 after extra time on Saturday.

Ronaldo sent Atletico goalkeeper Jan Oblak the wrong way from the penalty spot, sealing a 5-3 shootout win, then stripped off his shirt to celebrate with Madrid fans behind the goal.

Ronaldo's spot-kick was decisive after Atletico defender Juanfran struck the post with his team's fourth kick.

Atletico was left with bitter memories of its third loss in a European Cup or Champions League final.

Just like the 2014 final, a Madrid derby finished 1-1 after 90 minutes. This time, it was Real Madrid instead of Atletico in the role of long-time leader giving up a late equalizer.

Real Madrid captain Sergio Ramos, who struck in stoppage time two years ago, showed a forward's hunger to score in the 15t by forcing the ball past Atletico goalkeeper Jan Oblak from close range.

Atletico substitute Yannick Carrasco showed the same desire to level in the 79th, outmuscling Lucas Vazquez to shoot Juanfran's pass across goal high into the net.

Atletico missed a penalty kick in the 48th, given for Pepe's clumsy tackle through Fernando Torres.

Antoine Griezmann's kick struck the cross bar, repeating his failure to beat goalkeeper Keylor Navas from the spot in a league match this season. The France forward scored in the shootout.

Atletico raised its game after Griezmann's miss but the clearest shooting chance for defender Stefan Savic also failed to force a save from Navas.

Ramos showed how a defender, tough and often cynical, should finish. As noted for his red cards as goals, he has now scored in two Champions League finals to stand with Real Madrid stars Cristiano Ronaldo and Raul in the competition's history book.

Atletico's defense had fair warning of Real Madrid's threat, and its own weakness on the night, from free kicks as early as the sixth minute.

Again, Bale was fouled deep in Atletico territory, then fired a dipping cross. Attackers again got in front of defenders and both Karim Benzema and Casemiro seemed to deflect the ball toward Oblak staying on his goal-line. This time, the Slovenia goalkeeper blocked with his left leg.

When Madrid did score nine minutes later, Benzema was again in space but failed to connect on Bale's flick before Ramos pounced.

Benzema could have likely sealed the win in the 70th when sent clear on goal but Oblak blocked the Frenchman's shot with his chest.

Atletico was soon level when Carrasco exploited substitute Vazquez, a midfielder who had just come on for Benzema.