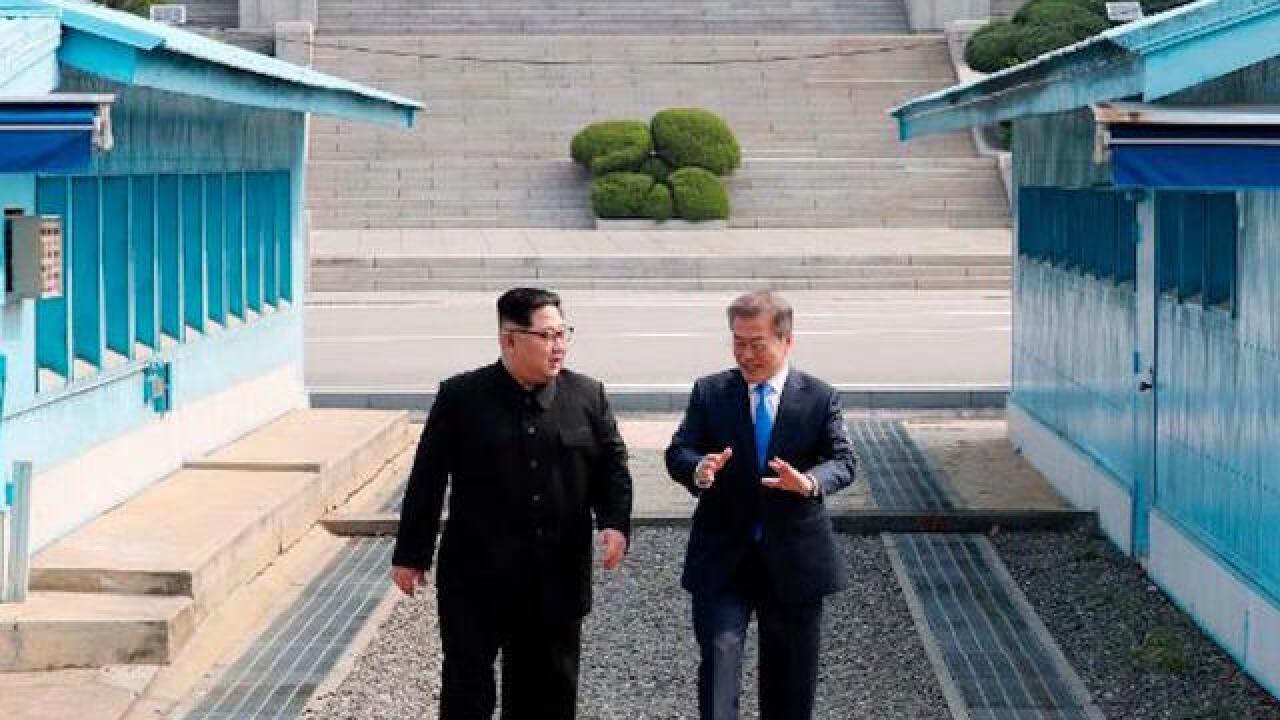 The end of the Korean War will be announced later this year, following an historic summit between the leaders of the two Koreas.

South Korean President Moon Jae-in and his North Korean counterpart, Kim Jong Un, signed the "Panmunjom Declaration for Peace, Prosperity and Unification on the Korean Peninsula," while standing in the demilitarized zone (DMZ) that has divided the two countries for more than six decades.

The announcement, made after a full day of meetings and a 30-minute private conversation between the two leaders, could bring an end to one of the world's longest running conflicts.

The Koreas went to war in 1950 when soldiers from the North Korean People's Army invaded the South. Although the armed conflict ended three years later in 1953, with the signing of the armistice, no formal peace treaty was ever signed, and technically, the two remain at war.

"The two leaders solemnly declare ... that there will be no more war on the Korean Peninsula and a new era of peace has begun," the declaration said.

The declaration also announced plans for Moon to travel to Pyongyang later this year.

"The South and the North will hold dialogue and negotiations in various fields, including high-level talks, as soon as possible, and take active measures to implement the agreed issues at the summit," it added.

"The South and the North will work together to mitigate sharp military tensions on the Korean Peninsula and to substantially eliminate the danger of war," the statement said.

"The South and the North agreed to cease all hostilities against the other side, which are the source of military tensions and clashes in all areas including the ground, sea and air."

"The South and the North will actively cooperate to establish a permanent and well-established peace regime on the Korean Peninsula."

Months in the making

The announcement comes after months of careful preparation in advance of the summit.

South Korea had scripted the meeting of the two leaders, down to the second, but it was Kim who delivered the most dramatic moment.

After he crossed the military demarcation line separating North and South Korea to shake hands with Moon, Kim invited him to step into the North.

The moment -- unthinkable only months ago -- was greeted by gasps, cheers and applause from people watching it on a large screen in central Seoul, and at a conference center in nearby Ilsan, where the South Korean government had set up a sprawling media center for the thousands of journalists invited to watch history being made.

It was also perhaps the only spontaneous moment of this carefully choreographed affair, which the Blue House has been practicing and rehearsing for weeks.

"President Moon briefly crossed over the MDL to the North," the Blue House said in a statement, referring to the military demarcation line. "This was not a planned event."

Writing in a visitor's book upon entering the Peace House, where negotiations took place, Kim wrote "a new history begins now" and "an age of peace, at the starting point of history."

Moon praised Kim's "courageous and bold decision" to sit down for talks during their morning meeting. "Over the past seven decades we weren't able to communicate, so I think we can talk the whole day today", Moon said, drawing laughs from Kim.

The summit is the result of lengthy and determined negotiating on the part of Moon, a longtime advocate of peace between the Koreas. It will also set the stage for the first meeting between a sitting US president and North Korean leader when Donald Trump and Kim meet in late May or June.