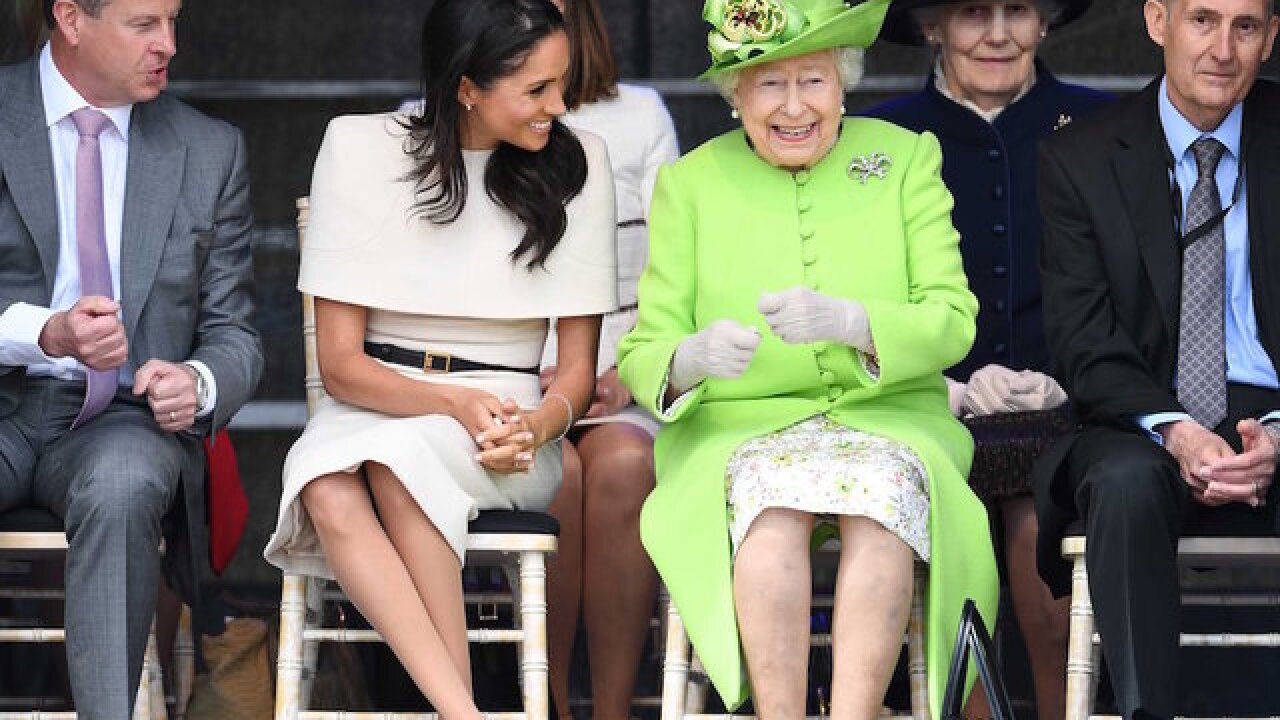 © 2018 Cable News Network, Inc.
Jeff J Mitchell/Getty Images
<p>Queen Elizabeth II shares a laugh with her new granddaughter-in-law, the Duchess of Sussex, during a ceremony to open a new bridge in Cheshire, England, on Thursday.</p>

Meghan, Duchess of Sussex, stepped out with Britain's Queen Elizabeth II on Thursday for her first official engagements without her husband Prince Harry by her side.

Meghan married the sixth in line to the throne in a lavish ceremony at Windsor Castle last month that was watched by millions around the world.

Britain's newest royal joined the monarch on a visit to the northwest county of Cheshire, where they opened a new toll bridge over the River Mersey.

PHOTOS: Meghan Markle and Queen Elizabeth's day out on the Royal Train

The pair departed for the day of engagements on Wednesday evening, journeying north on board the royal train.

Crowds -- including swarms of excited schoolchildren waving flags -- gathered as they arrived at train station in Runcorn, where they were greeted by David Briggs, the Lord-Lieutenant of Cheshire.

The day is likely to serve as a masterclass in royal etiquette for Meghan, who will get to see how Britain's longest-reigning monarch navigates these more mundane events, which are a staple part of life as a working royal.

While visiting the bridge, the royals were introduced to architects, planners and community representatives before watching a performance by local schoolchildren. The Queen then unveiled a plaque at the site to mark the opening of the bridge.

One of the UK's biggest infrastructure projects in recent years, the bridge has faced criticism over the introduction of new tolls.

Later, the Queen and her new ganddaughter-in-law will head into the city of Chester where they will open Storyhouse, a new library, theater and cinema. During the visit, they will watch a performance from a dance company for people in recovery from addiction.

Following that, Meghan -- under the watchful eye of the monarch -- will attend a lunch at Chester Town Hall.

Earlier this week, Kensington Palace announced the Duke and Duchess will embark on a tour of Australia and several neighboring countries later this year.

The royal newlyweds are set to visit Australia, Fiji, the Kingdom of Tonga and New Zealand in a tour that will coincide with the Invictus Games, which will take place in Sydney from October 20.

The Duke of Sussex founded the sporting event for wounded or sick servicemen and veterans in 2014.