Protesters march onto I-94, calling for justice for Breonna Taylor
News 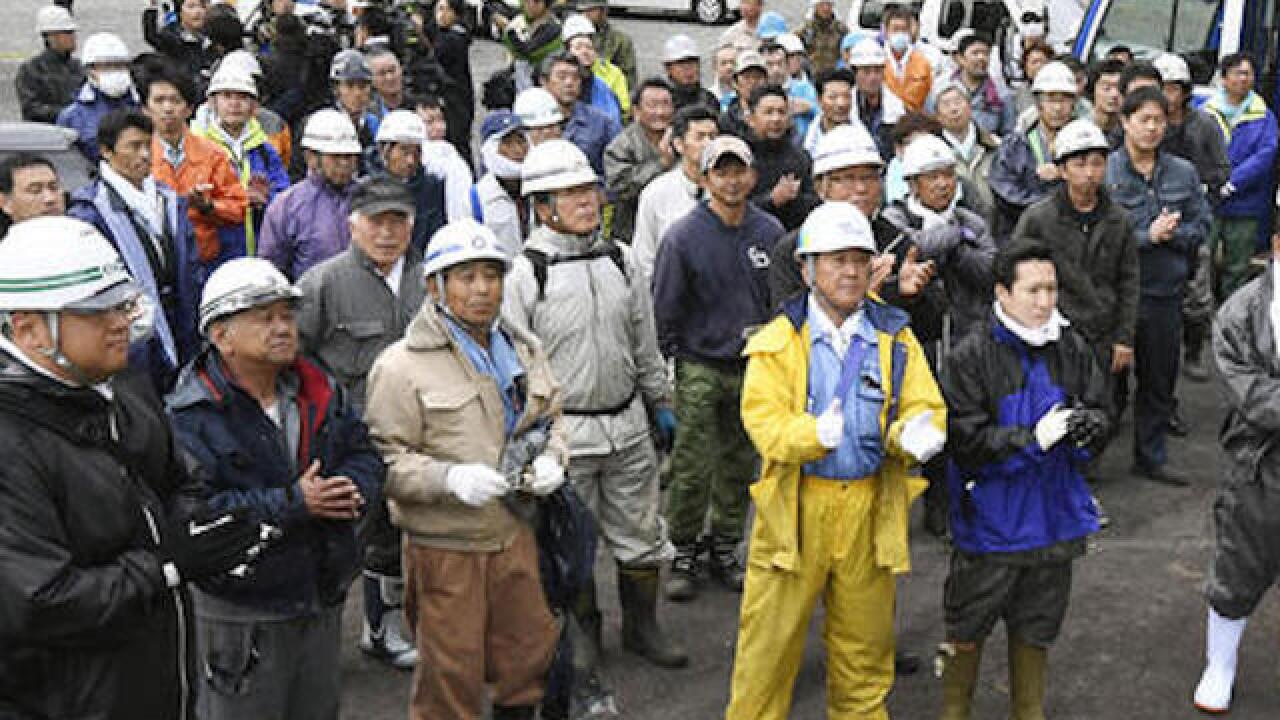 Copyright Associated Press
Daisuke Suzuki
<p>Rescuers celebrate after a news that a missing boy was found, in Nanae town, on Hokkaido, the northernmost of Japan's four main islands Friday, June 3, 2016. Police say they have found the boy who went missing after his parents reportedly left him in a forest as punishment six days ago. (Daisuke Suzuki/Kyodo News via AP) JAPAN OUT, MANDATORY CREDIT</p>

By: Associated Press
Posted at 8:19 PM, Jun 02, 2016
TOKYO (AP) — Nearly a week after he was abandoned in the forest by his parents, the boy did not shed a tear when he was found safe Friday. The soldier who discovered him by chance in a military hut gave him two rice balls, which 7-year-old Yamato Tanooka ate ravenously. He looked a bit worn out but was "genki," the military said, using a Japanese word describing healthy children.
The boy's safe return was welcomed in a nation riveted by his disappearance and undergoing intense soul-searching about how it raises and disciplines its children.
Yamato's story, as pieced together from comments from the military and police, was admirable in resourcefulness and resilience.
His parents, trying to teach him a lesson for misbehaving and throwing rocks, made him get out of the car last Saturday on the northernmost main island of Hokkaido in a forest reputedly ridden with bears. They couldn't find him when they returned several minutes later.
Apparently walking for several kilometers, the boy found the empty hut in a military drill area and entered a door that had been left open. It had no heat or power and no food, but Yamato huddled between mattresses on the floor and drank water from the solitary faucet outside the hut for several days, local media reported.
A massive manhunt, including 180 people and search dogs, had found no trace of him. The soldier who found him had not been part of the frenzied search effort, but soon the boy identified himself as Yamato Tanooka (Tah-noh-oh-kah).
Appearing outside the hospital where the boy was flown in by helicopter, his father apologized, bowing deeply, thanked everyone for the rescue and vowed to do a better job as his dad.
"We have raised him with love all along," said the father, Takayuki Tanooka, fighting tears. "I really didn't think it would come to that. We went too far."
Military officials expressed admiration for the boy's perseverance, as the building where he was found was far from where he had disappeared and involved a rigorous uphill climb.
The boy was dehydrated and had minor scratches on his arms and feet, but no serious health risks were found, a doctor who examined him said on nationally televised news.
Asked what he had told his son after he was found, the father said, "I told him I was so sorry for causing him such pain."
The nation welcomed the boy's safe return. Old photos of Yamato, wearing a cowboy hat here, holding up two fingers in a peace sign there, his bangs falling over a proud smile, were flashed across again and again on TV.
Daijiro Hashimoto, a former governor appearing on a talk show on TV Asahi, wondered how the boy had endured the loneliness, especially at night, and suggested that perhaps he had imagined he was on some adventure and was hiding in a secret camp.
"He had to keep a very positive attitude," Hashimoto said, reflecting widespread sentiment here. "He is fantastic. He didn't know how long it might take, and when he would ever be saved."
The boy's disappearance and the debate set off by the parents' decision resonated in an aging nation with a dearth of children, where child-raising is expensive and often requires financial sacrifice. Japanese culture also is not seen as promoting individual rights of children, but rather to view children almost as family property. Abandonment and child abuse are far more common in Japan than the stereotype of the doting parent and stay-at-home mom would suggest.
Yamato's parents are not officially under any police investigation for their actions.
A child welfare expert said abandonment of a child should be treated seriously. Tamae Arai, who heads a Tokyo ward's family support operations, said though she does not know the specifics of this case an investigation would be likely in a similar case to ensure a child is protected.
"Beating and kicking are not the only forms of child abuse. There is also neglect. Of course, we are all thrilled he was found, but it is important to note that there could be a serious problem here," she said.
Copyright 2016 The Associated Press. All rights reserved. This material may not be published, broadcast, rewritten or redistributed.