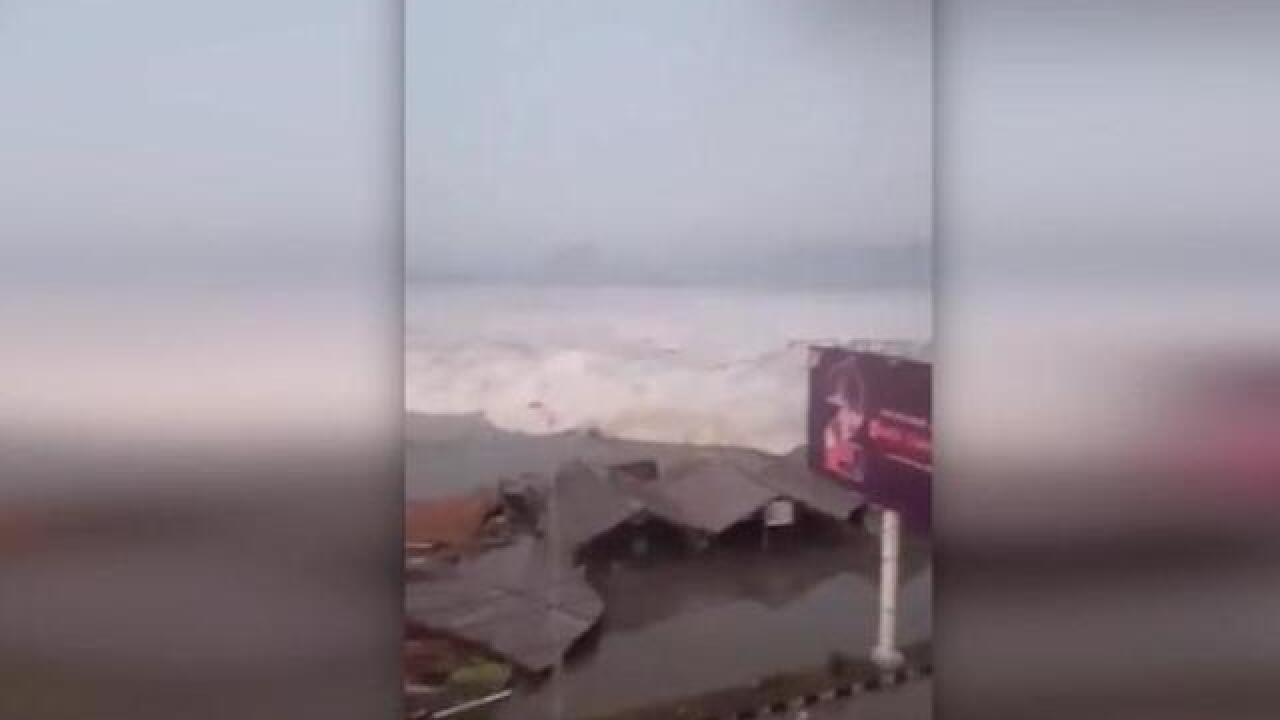 The death toll on the island of Sulawesi stands at 844 people, but officials expect that number to climb as rescuers on Monday continue to sift through the destruction left by a powerful earthquake and tsunami.

Two days after a 7.5 magnitude earthquake hit the island and 3-meter-high waves crashed onto its northern shore, authorities continued combing through chunks of concrete and lumber searching for survivors.

Getting into Palu, which saw the worst of the destruction, has been difficult. An airport runway was damaged, limiting flights into the area, and several roads and bridges have been washed out, said Jan Gelfand, who heads the International Red Cross delegation in Indonesia.

People are afraid to go inside because of the incessant aftershocks, he said. Cut off from the rest of the island because communications are down, people in the area are in desperate need of water, food and health care, Gelfand said. The Red Cross is trying to get kitchens, surgical teams and mobile clinics into the region.

"There's a large, large need, and I don't think we've quite seen the worst of things yet," he said.

Seventy-one foreigners were in Palu at the time of the quake and most were safely evacuated to Jakarta. At least five foreigners, including three French nationals as well as a Malaysian and a South Korean national, are unaccounted for, he said.

As of Sunday, there were no reports of US citizens affected in the quake, the US Embassy in Jakarta told CNN.

Survivors walked through floodwater and piles of debris. A shopping mall turned into rubble and the large dome of a mosque collapsed in Palu, the capital city of Central Sulawesi Province and home of 350,000 people. Homes and businesses along the coast, many of them tin-roof shanties, were washed away, as were vehicles. Damaged hospitals were forced to shut down.

Families carried the few belongings they could retrieve in plastic bags and backpacks to outdoor shelters where thousands hope to receive aid.

Hundreds were badly injured and at least 17,000 people were left homeless, Nugroho said.

A large number of bodies from the earthquake and tsunami in Donggala District and Palu will be buried in mass graves on Monday, Brig. Gen. Dedi Prasetyo told Indonesian state media on Sunday.

"Most of the corpses have started rotting so that we are going to bury them in mass graves as quickly as possible to prevent them from posing a risk of epidemic diseases," Prasetyo said.

The lack of heavy equipment and personnel has slowed rescue efforts in the coastal city, where workers were scrambling Sunday to rescue about 50 people trapped beneath the debris of a collapsed hotel.

"I am asking all of you to work day and night to complete every task related to the evacuation. Are you ready?" he asked the country's military.

Bambang Soesatyo, speaker of the People's Representative Council and a member of Golkar Party, told ANTARA News on Sunday the government needs to increase the scale of relief operations to the affected area. Many people had to sleep on the side of the road, Soesatyo said, and many patients were treated in open spaces. Residents are still worried about aftershocks and are afraid to return home, he said.

"The relief team should immediately try to provide these needs," Soesatyo said.

'It could get much worse'

Electricity and communications have been cut off and roads that are severely damaged or blocked by landslides are making it difficult to assess the damage, Nugroho said.

Gelfand said help is also on the way for the fishing towns of Donggala and Mamuju, two areas feared to be heavily devastated.

"The Indonesian Red Cross is racing to help survivors, but we don't know what they'll find there," Gelfand said.

With Palu airport closed, relief workers have to make their way there by road. Sulawesi is one of the biggest islands in the world and the drive from the nearest airport is around 10-12 hours.

Hundreds of families are already mourning the loss of their loved ones, including an air traffic controller who's been hailed as a hero.

Anthonius Gunawan Agung, 21, died in the hospital after he jumped off the traffic control tower at the Palu airport when he thought the tower was collapsing.

He stayed behind to make sure a passenger airplane safely took off, according to AirNav Indonesia, the agency that oversees aircraft navigation.

The current and former mayor of Palu are also among the dead, according to the Indonesian Red Cross.

Authorities have said the number of victims is expected to rise as families identify their relatives among the bodies recovered.

The horrific scene began Friday when a series of tremors rocked Sulawesi and a 7.5 magnitude earthquake triggered a tsunami that sent waves of "about three meters high" to the beaches of Palu and Donggala, officials said.

An early tsunami warning had been issued by the Indonesian meteorological agency, but was later lifted after the agency ascertained that the water had receded.

The quakes come weeks after a trio of earthquakes hit several islands in the South Pacific and Indonesia, including Lombok, which is still recovering from the effects of an August 5 earthquake that killed more than 430 people .