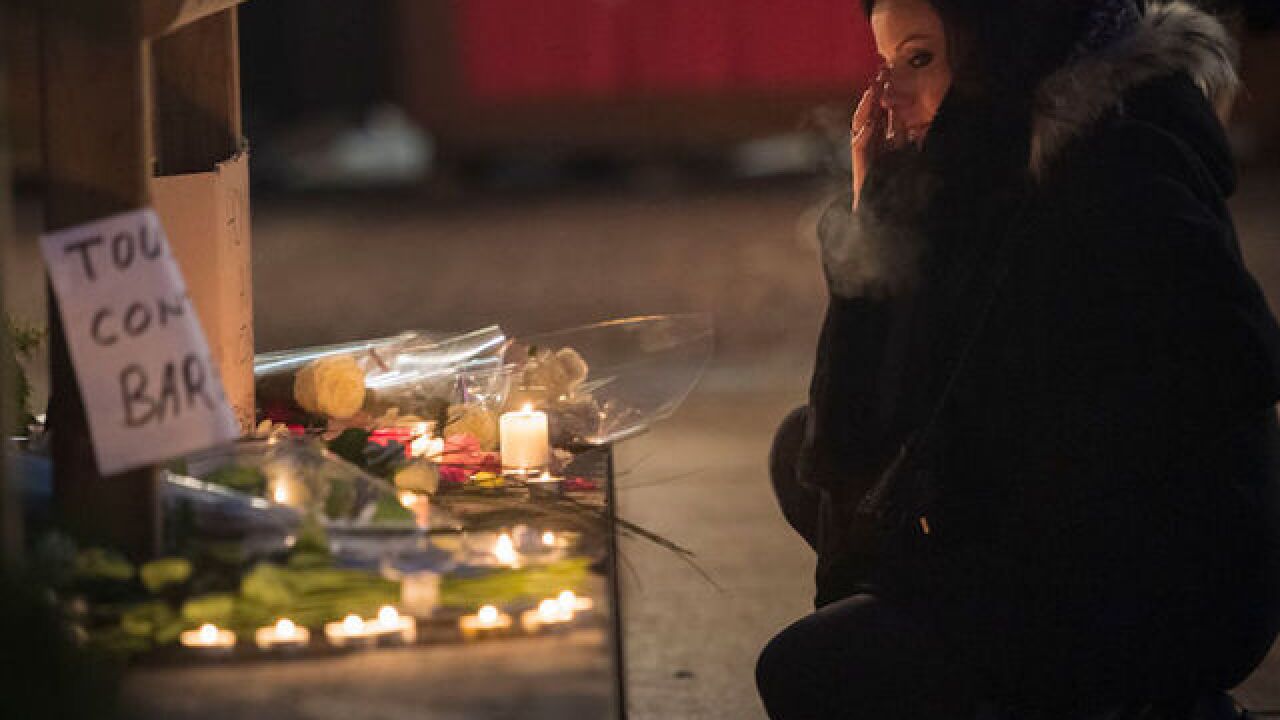 Image copyright 2018 Getty Images. All rights reserved. This material may not be published, broadcast, rewritten, or redistributed.
Thomas Lohnes
<p>A woman knees after she lighted a candle at the Christmas market where the day before a man shot 14 people, killing at least three, on December 12, 2018 in Strasbourg, France. </p>

A fifth person has died from his wounds as a result of Tuesday's Strasbourg Christmas market attack, the Paris prosecutor's office told CNN on Sunday.

A gunman burst into the market in the evening hours Tuesday as crowds did their holiday shopping, killing three and wounding 13 more. The fourth victim, Antonio Megalizza, an Italian journalist who had been on life support since the attack, died on December 14, French authorities told CNN.

CNN affiliate BFMTV reported that a 45-year-old man visiting from Thailand, an Afghan father of three who had been living in France for 15 years, and a man from Strasbourg also died in Tuesday's market attack.

The authorities are calling the mass shooting a terrorist attack. Police killed the gunman Thursday night near the marketplace.

The shooter, Cherif Chekatt, was known to prison officials for being radicalized and for his proselytizing behavior in detention in 2015, Paris prosecutor Rémy Heitz said, adding that he had been incarcerated multiple times in the past. French prosecutors said the suspect shouted the Arabic phrase "Allahu Akbar," meaning "God is greatest," at the time of the attack.

Chekatt, 29, had an extensive criminal background in Germany and Switzerland for thefts, break-ins and violence. However, Swiss and German police did not have him on a radical Islamist list, despite the number of crimes committed in those countries. His father, mother, and two brothers were questioned, a source close to the investigation told CNN. As of Thursday, five people were in custody.

On Tuesday, authorities said Chekatt entered the perimeter of the market by the city's Corbeau Bridge and started shooting and stabbing passers-by on the Rue des Orfèvres.

Anti-terror police flooded the market and tried to arrest the gunman. He exchanged fire with security forces, suffering an injury to his arm. The gunman then jumped into a taxi and fled the scene, Heitz said.

In the following days, citizens in the eastern French city near the German border lived under a curfew, and the nation's security threat level was at its highest status of "emergency terror attack."

The massive manhunt for Chekatt involved police, the military and anti-terrorist specialists from three European countries. French Interior Minister Christophe Castaner said police recognized a man who looked like Chekatt walking on the street in Strasbourg's Neudorf district on Thursday night and approached him. He opened fire on officers when they tried to question him, he said.

Strasbourg's famed Christmas market is one of the oldest in Europe and draws millions of visitors each year. Many have visited the market -- which has since reopened -- to light candles and lay flowers in tribute to the victims.