Positively Milwaukee: From tragedy to triumph

Bridgett Wilder overcame a lifetime of tragedy en route to becoming a writer, motivational speaker and so much more 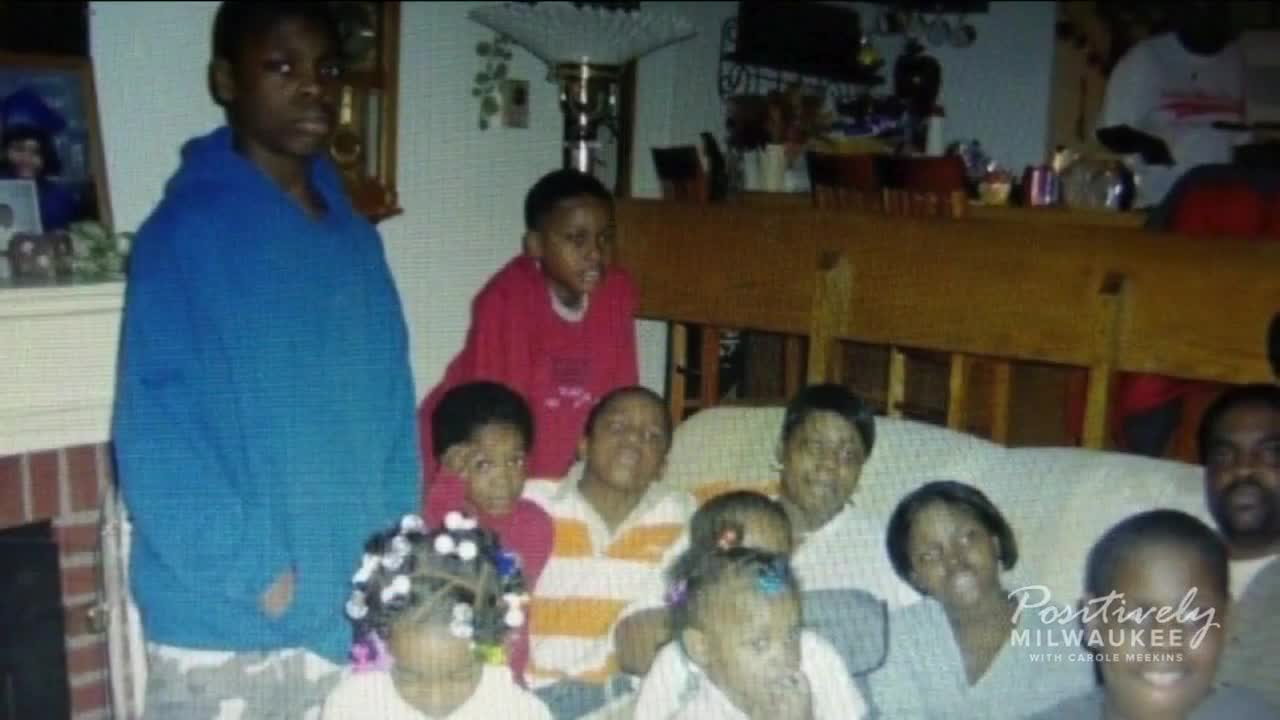 Bridgett Wilder, 45, talks about her journey in life that includes raising 10 children, heartbreak and much more adversity.

MILWAUKEE — We visit Bridgett Wilder on a typical day the mother of 10 interacts with her children. You'll soon find out. There's nothing typical about this 45-year-old mom.

For years, Wilder was a stay at home mom while her husband Wilson Anthony Wilder worked to support the family.

"He was the one who was the breadwinner. And I stayed at home and raised the children, this is more of a traditional family. Very young for that time frame to be doing that it was kind of like weird in that space in the 90s. To be living like that," shares Wilder.

One child, Beatrice, was diagnosed with Leukodystrophy, a neurological disease. Beatrice could not hug her mom, still, they were close. And they communicated.

"She couldn't hug me. And it bothered me that I couldn't get the embrace from her like I would my other children. And I believe one time she noticed that she breathed on me when I was lying next to her and I could feel her breath. And that was a form of connection that we had," said Wilder.

But one day, Beatrice never woke up. She was only six years old, she passed away in her sleep.

"I was always hoping that she would get better, but that day never came. I missed that. I miss taking care of her. I miss just the moments that we had alone where I can just talk to her and encourage her. We were very close, even though she could never verbally say 'mom,'" said Wilder. "I missed that. Often times, Miss Meekins, I still don't deal with her grief. Because it can be really hard for me to discuss it. But I deal with it by helping other people. If I'm at my alone times, I kind of keep myself busy and distracted, because it's a painful place."

After losing a child, faith helped. Wilder is a longtime member of Unity gospel House of Prayer.

"Looking at it from a spiritual perspective, I look at her walking in a different place than here. And that's what I saw when I looked at her wheelchair, she was no longer bound to that. So I had to take myself out of the selfish space of just wanting her to be here with me, and realizing that she didn't have to continue to go through the pain that she was suffering through. So that helped ease my grief, just knowing that she didn't have to suffer anymore."

But Wilder says Beatrice left an imprint on the entire family.

"I will tell you that she changed my life. She helped me Look at how it is for parents to have children that are just able, me and my children both have a sensitivity for people with conditions that may be in a place where they are often overlooked."

Three years later, Wilder suffered another devastating blow. She was only 35 when her husband died of a heart attack at the age of 37.

"He was such a key component that it felt like the weight that was carrying us dropped this, for lack of a better word. So, I had to learn how to restructure my life and begin again, when you lose a child. It's like nothing else," said Wilder. "And to lose my husband after that. I almost felt like I was having an out of body experience."

Suddenly Wilder was a young widow faced with raising nine children alone and dealing with the grief of my husband.

"Three years later, it was shocking, even though he was sick. Because here I was a mother of ten and having lost one and having to raise nine children alone. From the ages of 16 to four months. I never had the experience of being a single mom and I never wanted to be. I never signed up for that. But it was placed in my lap and I was forced to grow. It was as if my life was blown out of a canyon from zero to 100 so fast that I didn't even have time to process it."

But after these tragedies, Wilder was able to make astonishing transformations.

"No low place is made for us to stay is for a moment for us to grow into who we were predestined to me."

Wilder was catapulted into a new life after losing a child and her husband three years apart. While there was a young widow at 35, forced to raise nine kids ages four months to 16 years old, alone.

"I didn't know how I was going to navigate taking care of my children. But I went back to a former passion that I had, which is nutrition. Wilder says her church Unity Gospel House of Prayer helped to ease her despair. The biggest part of my growth is collaborating with God and believing in myself."

Wilder quickly had to transform from a stay-at-home mother to her children's primary breadwinner. She got a job as a receptionist.

"I learned about myself through this process."

Through her resilience, Wilder went back to school getting a Bachelor of Science in nutrition from Mount Mary University.

"I took on a challenge of saying, you know what, I'm going to try. "And little did I know, it would introduce me to myself. It introduced me to understand how intelligent I was."

It took seven years to finish her courses. She had to extend her time after yet another devastating blow.

"I had to show up at class every day. I had to strategize on how am I going to make sure the kids are fed, go to school, go to work, which I did. I worked, went to school. But then another tragedy hit and my mother died. And I never lost sight of how bad do I want it. "

But something else was eating at Wilder. She was morbidly obese, weighing over 300 pounds at the time

"You eat how you feel about yourself. When I didn't feel good, I ate garbage. I ate fast food. I didn't treat myself with the value that I deserved," said Wilder. "But now I'm like, I want to be here a few more years. It's time for me to put a lot of nutrients in, and vegetables and fruit in my body. I used to have diabetes. And I no longer have it. I was diagnosed at a time where I was able to reverse it today and she helps others find wellness and healthy eating."

She stresses the mental component. Through her metamorphosis, Wilder discovered she had to confront a trauma she had buried for years.

"I was raped at the age of 15. So, tragedy was really a part of my story. The only difference between with the rape, I suppressed that and I just went on with life."

Wilder even started her own business.

"I teach my clients how to declutter their cabinets for weight loss success. And oftentimes they think I mean, get rid of all the sweets. No, I'm saying who is in your space that is not supportive. Who is the sabotager remove any barrier that's going to keep you from completing a goal!"

Wilder is also a motivational speaker who continues a personal quest to do better my fight really is in me, continuing to seek ways to self improve. "Because if I'm self if I improve myself, I'm better at helping other people. So that's the reason why I fight so hard to make sure that I'm well in my mind and my body and my spirit because I'm better at helping others when I'm at my best place."

Wilder even wrote a book called "Why Me? A question I refuse to ask God".

On top of all of this, her nine children are thriving.

"My confidence now bled into my children. I have my oldest in accounting. One of my daughters is a model, one is a business owner, one goes to Howard University, no one's in trouble."

So, a woman who had every excuse to give up persevered.

Bridgett Wilder has found her voice, her place and most of all her purpose. She helps others remember that mind, body and spirit are crucial roles in the journey toward wellness.

"When I tell you, it's a story of tragedy to triumph it is that! I'm happy to talk to you because it's given me the opportunity to tell people that although we go through storms in life, there can be victory after the most traumatic events in our life. Even though a situation may seem hopeless, take it back. Take it back into your own hands and become whoever you desire to be. And don't take no for an answer!"

More information on Bridgett Wilder's program and book can be found at http://bridgettwilder.net/