What's going on with Hawaiian seals? Nobody nose 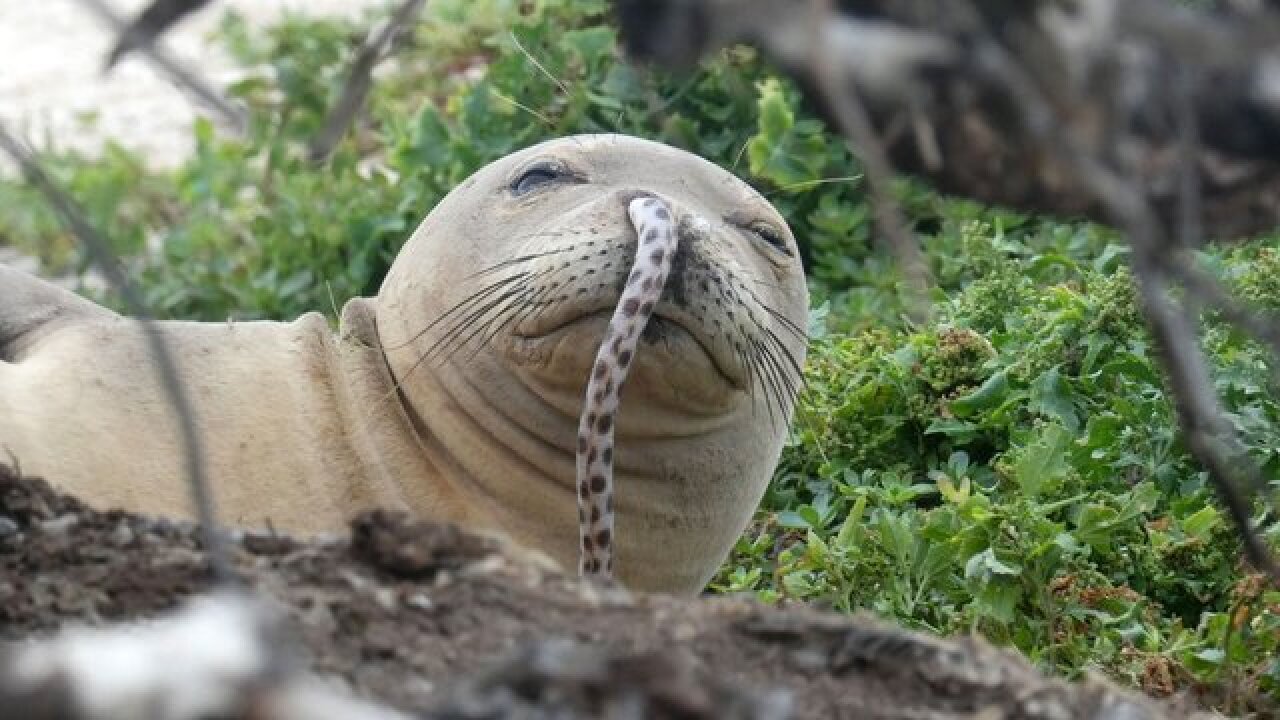 (CNN) -- Endangered seals are baffling conservationists with an unlikely predicament -- getting eels stuck up their noses.

The Honolulu-based Hawaiian Monk Seal Research Program (HMSRP), part of the United States' NOAA Fisheries agency, posted a photo on its Facebook page Monday that showed a seal with the slippery creature lodged firmly in its right nostril.

This undignified incident is just the latest in a long (and wriggly) line of eel invasions to strike the Hawaiian monk seals -- a phenomenon that was first spotted in the summer of 2016 off Hawaii's Lisianski Island.

"Mondays ... it might not have been a good one for you but it had to have been better than an eel in your nose," the HMSRP joked on its Facebook page.

The Hawaiian monk seal is one of the rarest seal species in the world and is classed as endangered in the US. The majority of the population lives around eight remote islands of the Northwestern Hawaiian Islands, and it was estimated in 2016 that only 1,427 animals remain.

"We have reported on this phenomenon before, which was first noted a few years back. We have now found juvenile seals with eels stuck in their noses on multiple occasions," the HMSRP added.

Charles Littnan, the HMSRP's lead scientist, noted that researchers are still baffled by the phenomenon.

"This is a good example that no matter how well studied or watched an animal is, it is always going to present you with something you have never seen before," he told CNN. "Sometimes it is an amazing demonstration of intelligence or physical ability, sometimes it is a juvenile seal with an eel stuck in its nostril."

The NOAA has proposed two hypotheses: first, that eels launch themselves defensively at the seals while they are foraging for food, shoving their mouths and noses into the crevices of coral reefs and under rocks.

Another theory the agency suggests is that a seal may swallow an eel whole and then regurgitate it through its nose.

Speaking to The Guardian, Littnan said some of the eels are lodged so far in that trying to remove them is like a "magician's handkerchief trick," as conservationists have to keep "pulling and pulling."

The conservation agency reassured concerned viewers on Facebook that the eel was successfully removed, saying that the procedure required light restraint of the seal and a slow, steady pull on the eel, taking around 30 seconds in total.

"In all cases the eel was successfully removed and the seals were fine. The eels, however, did not make it," the agency said on Facebook.

Animal lovers nevertheless took to Facebook to express their alarm, questioning why an eel would undertake such a foolhardy mission.

"What kind of heavenly goodness resides up a seal's nose that makes eels willing to risk their lives for it?" one wrote.

Despite the eels' successful extraction, they could pose a serious threat to the seals. The HMSRP has warned that the seals are at risk from infections and toxins produced by microalgae that accumulate in coral reef-associated fish. Nose blockages could also hamper the seals' ability to dive, as the mammals typically need to close their nostrils when under water.