US drops non-nuclear 'mother of all bombs' in Afghanistan 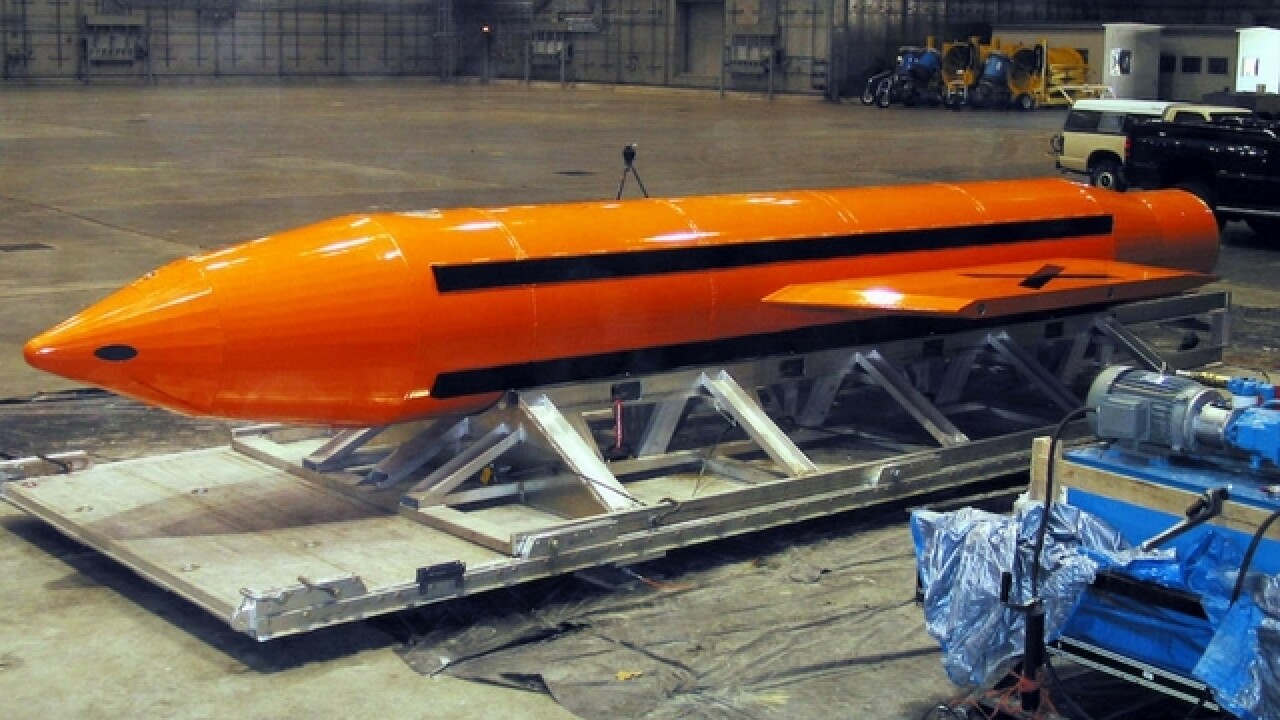 Copyright Getty Images
<p>This U.S. Department of Defense (DoD) handout photo shows the Massive Ordnance Air Blast (MOAB) weapon March 11, 2003 at Eglin Air Force Base, Florida. The 21,000 pound bomb was dropped from a C-130 Hercules aircraft at the Eglin test range March 11, 2003. According to the DoD the MOAB is the largest non-nuclear conventional weapon in existence.</p>

WASHINGTON (CNN) -- The US military has dropped an enormous bomb in Afghanistan, according to four US military officials with direct knowledge of the mission.

A GBU-43/B Massive Ordnance Air Blast Bomb (MOAB), nicknamed the "mother of all bombs," was dropped at 7:32 pm local time Thursday, the sources said. A MOAB is a 21,600-pound, GPS-guided munition that is America's most powerful non-nuclear bomb.

Officials said the target was an ISIS cave and tunnel complex and personnel in the Achin district of the Nangarhar province.

President Donald Trump declined to say whether he personally signed off on the use of the bomb.

"Everybody knows exactly what happens. So, what I do is I authorize our military," Trump said when asked whether he authorized the strike. "We have given them total authorization and that's what they're doing."

Sources told CNN that Gen. John Nicholson, commander of US forces in Afghanistan, signed off on the use of the bomb. The White House was informed of the plan.

Trump has given military commanders broader latitude to act independently on several battlefields where US forces are involved, which Trump touted as making a "tremendous difference" in the fight against ISIS.

The military is currently assessing the damage. Gen. John Nicholson, commander of US forces in Afghanistan, signed off on the use of the bomb, according to the sources. The authority to deploy the weapon was granted to Nicholson by the commander of US Central Command, Gen. Joseph Votel, Stump said.

"As ISIS-K's losses have mounted, they are using IEDs, bunkers and tunnels to thicken their defense," Nicholson said in a statement following the strike.

"This is the right munition to reduce these obstacles and maintain the momentum of our offensive against ISIS-K," Nicholson added.

RELATED: This is what it looks like when a MOAB explodes

"The United States takes the fight against ISIS very seriously and in order to defeat the group we must deny them operational space, which we did," White House press secretary Sean Spicer said later Thursday. The strike "targeted a system of tunnels and cave that ISIS fighters use to move around freely."

"US forces took every precaution to avoid civilian casualties with this strike. US Forces will continue offensive operations until ISIS-K is destroyed in Afghanistan," read the statement from US Forces Afghanistan.

The extent of the damage and whether anyone was killed is not yet clear. The military is currently conducting an assessment.

The Pentagon is currently reviewing whether to deploy additional trainers to Afghanistan to help bolster US allies there.

The Achin district is the primary center of ISIS activity in Afghanistan. A US Army Special Forces soldier was killed fighting the terror group there Saturday.