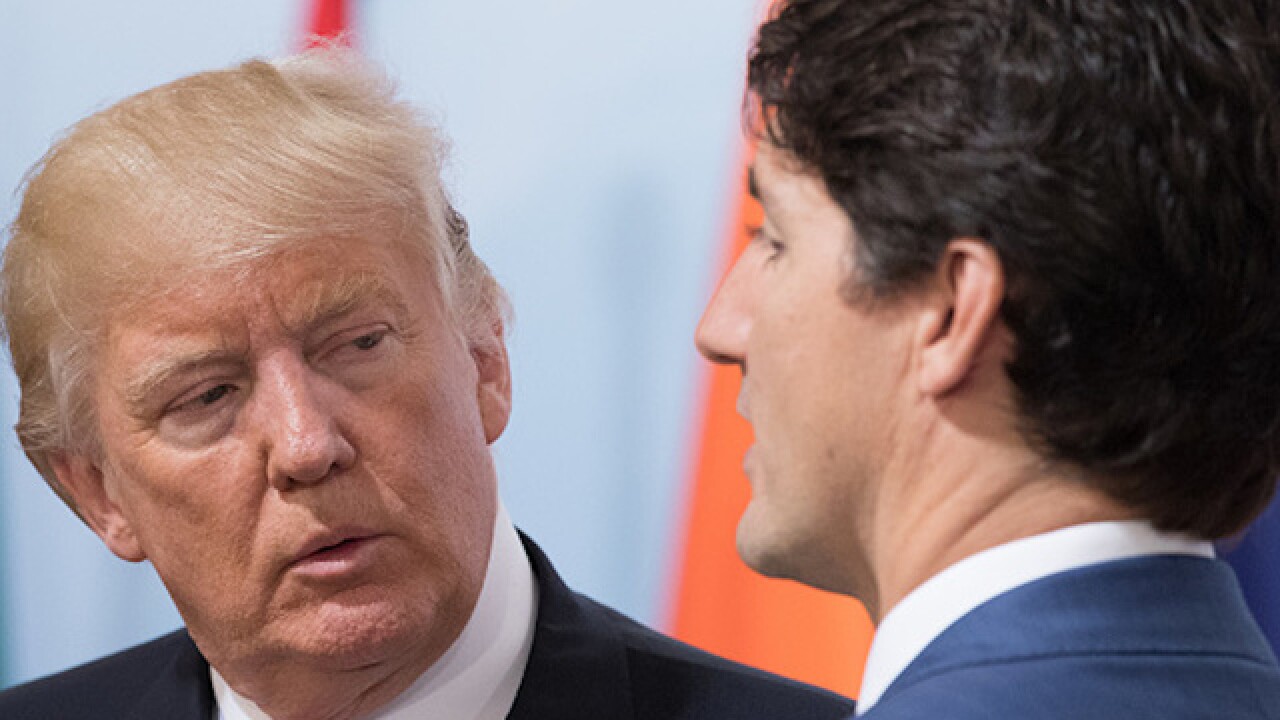 Image copyright 2018 Getty Images. All rights reserved. This material may not be published, broadcast, rewritten, or redistributed.
Matt Cardy
<p>HAMBURG, GERMANY - JULY 08: U.S. President Donald Trump (L) and Canada's Prime Minister Justin Trudeau talk ahead of panel discussion titled 'Launch Event Women's Entrepreneur Finance Initiative' on the second day of the G20 summit on July 8, 2017 in Hamburg, Germany. Leaders of the G20 group of nations are meeting for the July 7-8 summit. Topics high on the agenda for the summit include climate policy and development programs for African economies. (Photo by Matt Cardy/Getty Images)</p>

President Donald Trump on Monday touted the renegotiated NAFTA deal between the US, Mexico and Canada as "truly historic news for our nation and indeed for the world."

Trump, who has long railed against NAFTA, once again called the original agreement "the worst trade deal perhaps ever made" and said the new the US-Mexico-Canada Agreement -- dubbed the USMCA -- will be a boon for the US economy.

"The factories were leaving, the jobs were leaving, people were being fired," Trump said, describing the old agreement. "We have negotiated this new agreement based on the principle of fairness and reciprocity. To me, it's the most important word in trade."

"This new deal will be the most modern, up-to-date and most balanced trade agreement in the history of our country with the most advanced protections for workers," Trump said during a Rose Garden speech.

The President also touted the deal as a boon for American farmers, improved labor standards and US manufacturing.

The agreement represents the fulfillment of a signature campaign promise and the brokering of an agreement that just days ago seemed likely to unravel, threatening the decades-old North American free trade framework.

The negotiations between the US and Canada appeared to be going nowhere fast when Trump warned once again last week that he was prepared to exclude Canada from a renegotiated NAFTA agreement.

"It'll probably or possibly be just USM. It'll be United States and Mexico," Trump said at a news conference on Wednesday, days before the Sunday deadline.

But on Friday morning, Trump's senior adviser and son-in-law Jared Kushner got a call from Canadian Prime Minister Justin Trudeau's chief of staff Katie Telford and senior adviser Gerald Butts who wanted to make a final push to reach a deal, two sources familiar close to the negotiations said.

The phone call set into motion a series of phone negotiations over the weekend involving Kushner and US Trade Representative Robert Lighthizer on the US side and the direct involvement of Trudeau's most trusted advisers, leading to an 11th-hour deal late on Sunday night.

US, Canadian and Mexican officials have been working to renegotiate NAFTA for much of Trump's presidency, but the US began negotiating separately with Mexican and Canadian officials in recent months to get past sticking points involving those bilateral trading relationships.

Late last month, the US reached an agreement with Mexico and turned to bringing Canada into the fold, all with Trump threatening to exclude Canada and move forward on a bilateral deal between the US and Mexico.

The two sides struggled to get past key sticking points for weeks after that, but sources credited the phone call from Trudeau's advisers to the Canadians with setting in motion a good faith, in the weeds negotiations to resolve the final hurdles, reinvigorating Lighthizer's negotiations with Foreign Secretary Chrystia Freeland.

Trump was updated on the discussions and giving his feedback through the weekend negotiations, from Friday to Sunday.

But it was Kushner's close relationship with Telford that sources are crediting with getting the US and Canada to this breakthrough.

It's not the first time Kushner's involvement has pushed negotiations past their toughest points. Kushner played a similar role with Mexico -- in that case, his close relationship was with Luis Videgeray, the Mexican foreign secretary, helped propel those talks to fruition.