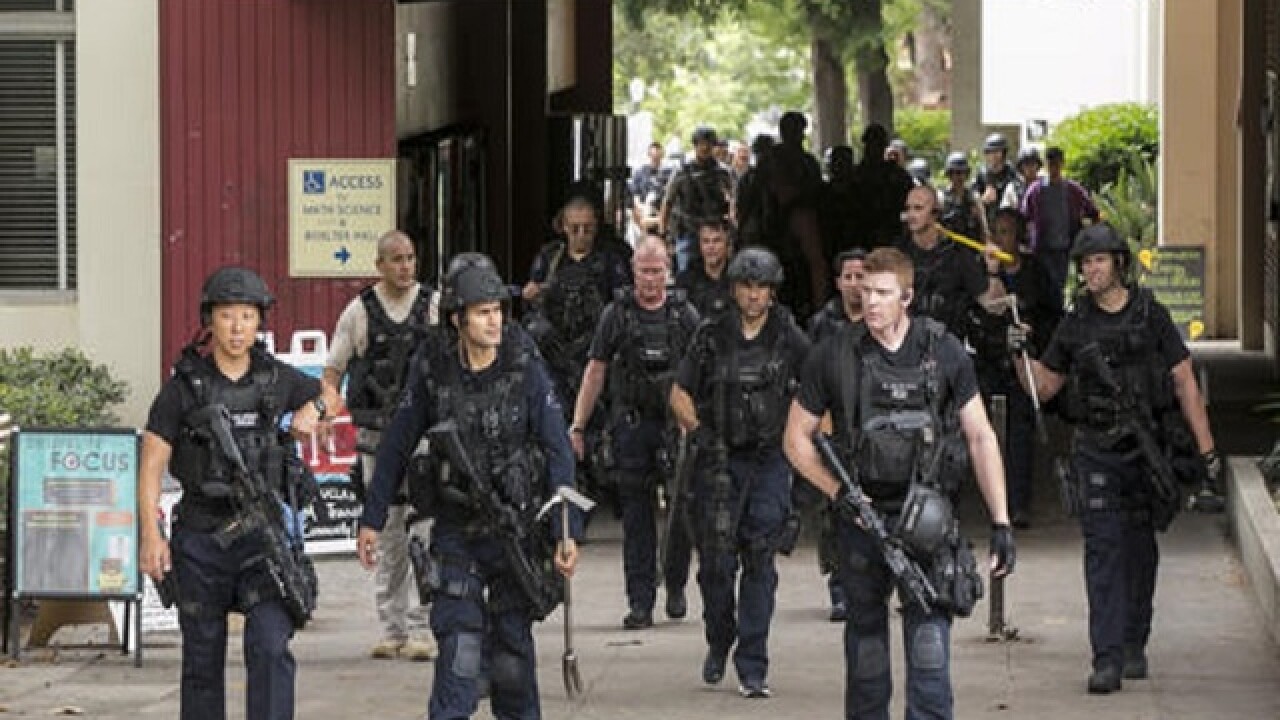 LOS ANGELES (AP) — In the minutes after a fatal shooting at a UCLA engineering building, panicked students seeking a safe place to hide used belts, cords and other items to try to secure doors they said did not lock.
With rumors swirling that there could be as many as four shooters, senior Daphne Ying, 21, and others struggled to secure a door that swings out into a hallway of the building.
They tied one end of a long cord to the doorknob and the other end to a chair bolted to the floor. Three male students stood near the door to pull it shut in case someone tried to get in.
"All of us were really scared and nervous," Ying said. "We barely spoke."
Engineering student Pranasha Shrestha's design class was ending across from the engineering building when students got a text alert to shelter in place. She and others retreated to the classroom and quickly realized the doors didn't lock.
"Doors open outward with no locks so we had to improvise our own locking mechanism," the 22-year-old Shrestha tweeted.
She said one clearly shaken student grabbed his belt and looped it in a figure eight around the door handle and a handrail, then placed a water bottle inside a loop to keep it taut.
Another belt, tables and chairs were used to secure a second door, and the professor suggested everyone stand behind a concrete section of wall as protection from possible bullets.
About two hours later, students learned the shooting had been a murder-suicide that claimed the lives of two men and was confined to one office.
Students posted photos and video of the makeshift security on social media, sparking questions over safety on the campus.
Scott Waugh, an executive vice chancellor and provost at the school, told reporters that university officials were troubled by some reports of unlocked doors.
"We'll review the locks on the doors and any security issue that has arisen in the course of today," Waugh said.
The campus website tells students and teachers coping with the threat of an active shooter to stay inside rooms and offices, secure doors, turn off lights and stay quiet.
"If the door has no lock and the door opens in, a heavy door wedge can be kept on hand and used," the website says. "Otherwise look for heavy furniture to barricade the door. If the door has a window, cover it."
The recommendations also include considering windows as exits depending on the location of a shooter.
Umar Rehman, a 21-year-old student who was in the adjacent building when the shooting occurred, said he was terrified as he and other students lay on the ground in a room and watched the unlocked door.
The group decided to hold the door closed and demand identification from anyone who tried to get in. But eventually they got word that the building had been cleared and they walked out.
"I'm glad to come out of it safe and sound," he said.
Copyright 2016 The Associated Press. All rights reserved. This material may not be published, broadcast, rewritten or redistributed.