Trump angers France and Britain with his NRA speech 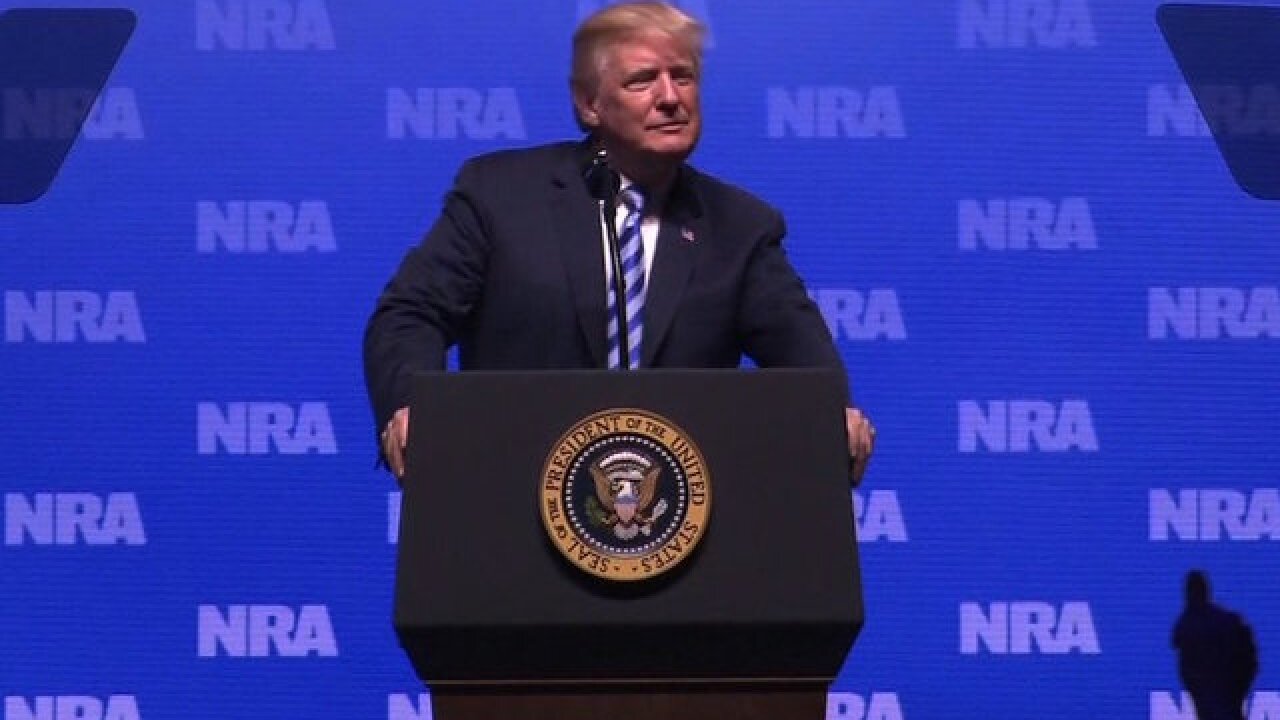 US President Donald Trump took aim at two of America's closest allies in a speech at the NRA convention, saying strict gun laws failed to prevent the 2015 terrorist attacks in Paris and highlighting a purported increase in knife violence in London.

The comments provoked anger in both France and Britain.

France was especially incensed after Trump, while speaking at the gun rights convention in Dallas on Friday, pointed his hand as if it were a gun while describing how each of the victims in Paris was fatally shot.

"France expresses its firm disapproval of President Trump's remarks ... and calls for the respect of the memory of the victims," it said.

Francois Hollande, who was the French President during the 2015 attacks, tweeted Saturday:

"Donald Trump's shameful remarks and obscene histrionics say a lot about what he thinks of France and its values. The friendship between our two peoples will not be tainted by disrespect and excessiveness. All my thoughts go to the victims of November 13."

Trump went on to say things might have been different had Parisians in the cafes under attack had been armed.

"If one employee or just one patron had a gun, or if one person in this room had been there with a gun, aimed at the opposite direction, the terrorists would have fled or been shot. And it would have been a whole different story," Trump said.

The Élysée palace responded to that comment by saying, "The free flow of arms within society does not constitute a shield against terrorist attacks. It can instead facilitate the planning of this type of attack."

And the French ambassador to the United States, Gérard Araud, tweeted: "The statistics of the people killed by guns don't convince France to change its guns laws."

‏A group of about 10 men staged a series of coordinated attacks in Paris on November 13, 2015, killing at least 130 people and wounding hundreds.

The attackers, armed with assault rifles and explosives, targeted six locations across the city. ISIS claimed responsibility for the attacks.

Trump also compared an unnamed London hospital to a "war zone" in the NRA speech, saying that despite tough gun laws in the United Kingdom, it has blood all over the floors from victims of knife attacks.

"They don't have guns. They have knives and instead there's blood all over the floors of this hospital," Trump said. "They say it's as bad as a military war zone hospital ... knives, knives, knives. London hasn't been used to that. They're getting used to that. It's pretty tough."

But former UK Cabinet minister Charlie Falconer tweeted Saturday: "US murder rate over 5 times higher than the UK's. There isn't a person in the whole world (with the possible exception of the President of the US, and he's probably lying) who believes the way to reduce our murder rate is to make it easier to get guns."

It's unclear what hospital Trump was referring to. But the BBC reported that a trauma surgeon at the Royal London Hospital, Dr. Martin Griffiths,recently told the network that his fellow doctors have compared it to an Afghan war zone.

Amid the furor over Trump's comments, Griffiths tweeted Saturday: "Happy to invite Mr Trump to my (prestigious) hospital to meet with our mayor and police commissioner to discuss our successes in violence reduction in London."

Brohi said that while there is more that can be done to combat knife attacks, gunshot wounds are "at least twice as lethal as knife injuries and more difficult to repair."

Trump and British Prime Minister Theresa May spoke by phone Saturday. According to the White House, they discussed China trade, North Korea, Iran and Trump's upcoming visit to Britain. It's unknown whether they talked about Trump's remarks to the NRA.