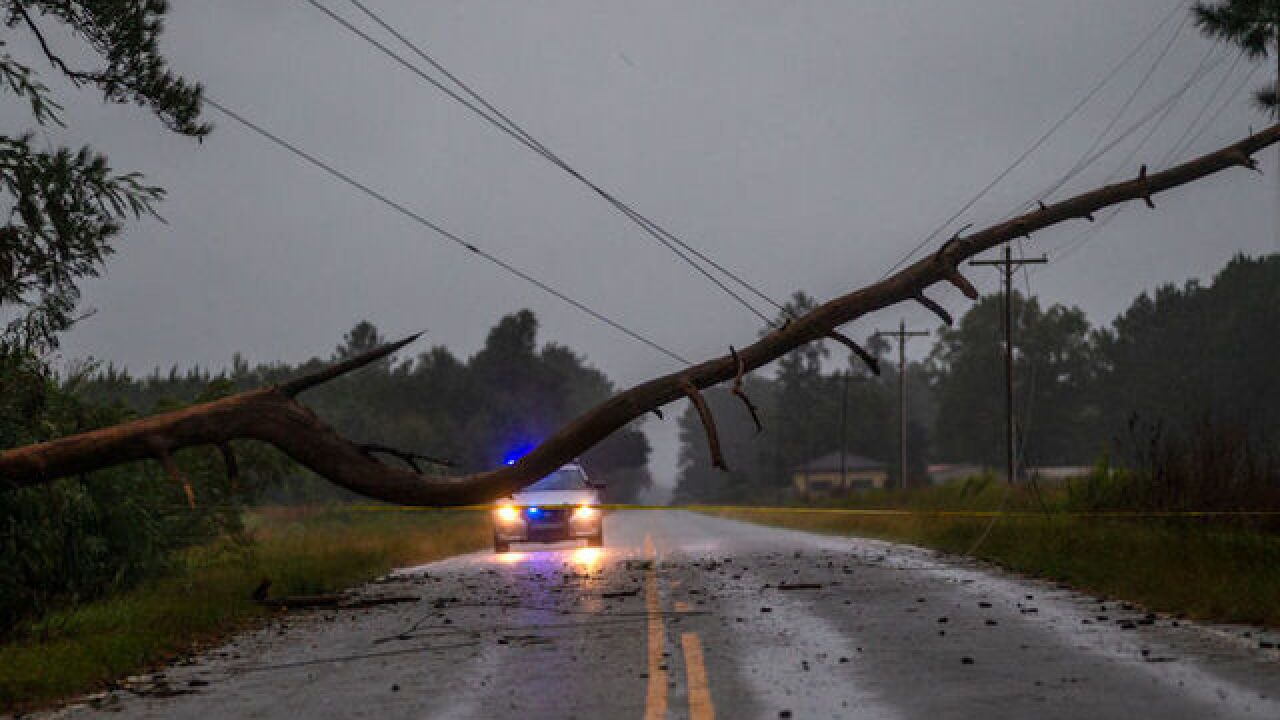 Image copyright 2018 Getty Images. All rights reserved. This material may not be published, broadcast, rewritten, or redistributed.
Mark Wallheiser
<p>A law enforcement officer blocks traffic from a downed tree on rural South Carolina state highway 51 on September 14, 2018 near Florence, South Carolina. The storm made landfall as a category 1 hurricane but has since been downgraded to a tropical storm. </p>

Tropical Storm Florence's relentless rain is flooding parts of the Carolinas and promises even more for days, officials said Saturday, a day after it landed as a hurricane and left at least eight people dead -- including a baby.

"The flood danger from this storm is more immediate today than when it ... made landfall 24 hours ago," North Carolina Gov. Roy Cooper said Saturday morning. "We face walls of water at our coasts, along our rivers, across our farmland, in our cities and in our towns."

The storm's center is crawling over South Carolina, but many of its main rain bands still are over already-saturated North Carolina -- setting up what may be days of flooding for some communities.

Photos: Florence leaves path of destruction on coast of Carolinas

Serious flooding is expected throughout the two states -- and some rivers may not crest for another three to five days.

Florence crashed ashore Friday morning in North Carolina as a Category 1 hurricane, and it has wiped out power to about 964,000 customers in that state and South Carolina.

It has trapped people in flooded homes as citizen swift-water rescue teams from out of state join local emergency professionals around the clock to try and bring them to safety.

• Florence's location: By 2 p.m. Saturday, Florence's center was 50 miles west of Myrtle Beach, South Carolina, with maximum sustained winds of 45 mph. It was moving west at 3 mph, the National Weather Service said. The storm will dump rain in the Carolinas through the weekend before reaching the Ohio Valley.

• Winds: Florence's tropical-storm-force winds (at least 39 mph) extend up to 150 miles from its center.

• Trapped and rescued: In hard-hit New Bern, North Carolina, where 4,300 homes have been damaged, rescuers have taken more than 400 people from homes surrounded by rising waters, and about 100 others are awaiting rescue, Mayor Dana Outlaw said Saturday morning. In nearby Onslow County, three US Coast Guard helicopters were helping with rescue missions Saturday, officials said.

• Record rainfall: Florence has dumped more than 30 inches of rain in Swansboro, North Carolina, as of Saturday morning, breaking an all-time record for rainfall from a tropical system in the state. The previous record of 24.06 inches was set during Hurricane Floyd in 1999.

Across the Carolinas, officials are sounding the alarm: More communities will flood as rivers collect water from upstream and spill over.

In Rocky Point, North Carolina, Susan Bostic and her family were packing to leave Saturday morning, even though Florence's center was long gone.

The Northeast Cape Fear River flooded there after Hurricane Floyd, destroying her original home. This round of flooding is predicted to be worse -- cresting at what would be a record 22.8 feet just to the north by Tuesday -- and the river already was encroaching her yard Saturday.

Anxiety also reigned Saturday in Lumberton, a North Carolina city that was submerged for days after 2016's Hurricane Matthew.

Volunteers and city workers have been filling sandbags, trying to plug a low point in the city's levee system before the Lumber River crests. It's expected to be well past major flood stage (19 feet) from Sunday morning into at least Wednesday, the National Weather Service said.

The city installed 11 pumps to help deal with the river, but Mayor John Cantey said he wants people living near it to get out.

"If you live in south Lumberton, west Lumberton, go ahead and leave now while you can, please," Cantey told CNN on Saturday morning.

In Cumberland County, which includes Fayetteville, officials ordered people within 1 mile of the Cape Fear River to evacuate by 3 p.m. Sunday.

In South Carolina, the worst is likely yet to come for communities such as Conway, about 15 miles inland from Myrtle Beach.

Water was rising Saturday morning in a flood plain near the Waccamaw River, lapping up against homes and pooling over at least one main road.

At least 8 have been killed

Florence has left at least eight people dead, including a mother and her child who died after a tree fell on their house in Wilmington, North Carolina, police said. The father was hospitalized with injuries.

In Hampstead, North Carolina, emergency responders going to a call for cardiac arrest found their path blocked by downed trees. When they got to the home, the woman was dead, authorities said.

Two men were also killed in Lenoir County, North Carolina. One was electrocuted while hooking up a generator and the other while checking on his dogs outside, emergency officials said.

Two people died Saturday in Duplin County, North Carolina, due to flash flooding and "swift water on roadways," the sheriff's office there said.

Earlier Saturday, officials in North Carolina's Carteret County said two other people were dead as a result of the storm. They later clarified those deaths were not related to Florence.

Those who stayed behind gave harrowing accounts of getting trapped in their homes surrounded by water.

Annazette Riley-Cromartie said she and her family thought they'd be safe in their brick house in eastern North Carolina. But the water kept rising.

She, her husband and three children escaped into the attic, but the winds howled, and the family fled to an upper floor bedroom.

As they waited for emergency workers, they heard neighbors screaming for help. Her 6-foot-2 husband went to see what he could do, but the water was above his chest, she said.

"It's the worst feeling in the world to hear people yelling for help, and you can't do anything," she said.

She said she called 911, but no one came. Eventually, a volunteer rescue team from Indiana arrived with a boat and rescued them.

Officials in several states have declared states of emergency, including in the Carolinas, Georgia, Virginia and Maryland, where coastal areas are still recovering from summer storms.

According to the National Hurricane Center, the storm will travel through upstate South Carolina, be downgraded to a tropical depression, then turn north toward the Ohio Valley.

As it moves near Ohio and West Virginia, it will become a remnant low. Then it will swing to the northeast in the middle of next week on a path to the Atlantic Ocean near Nova Scotia, where it will be an extratropical low with gale-force winds.