Swift lawyer: "The guy did it. Don't be fooled." 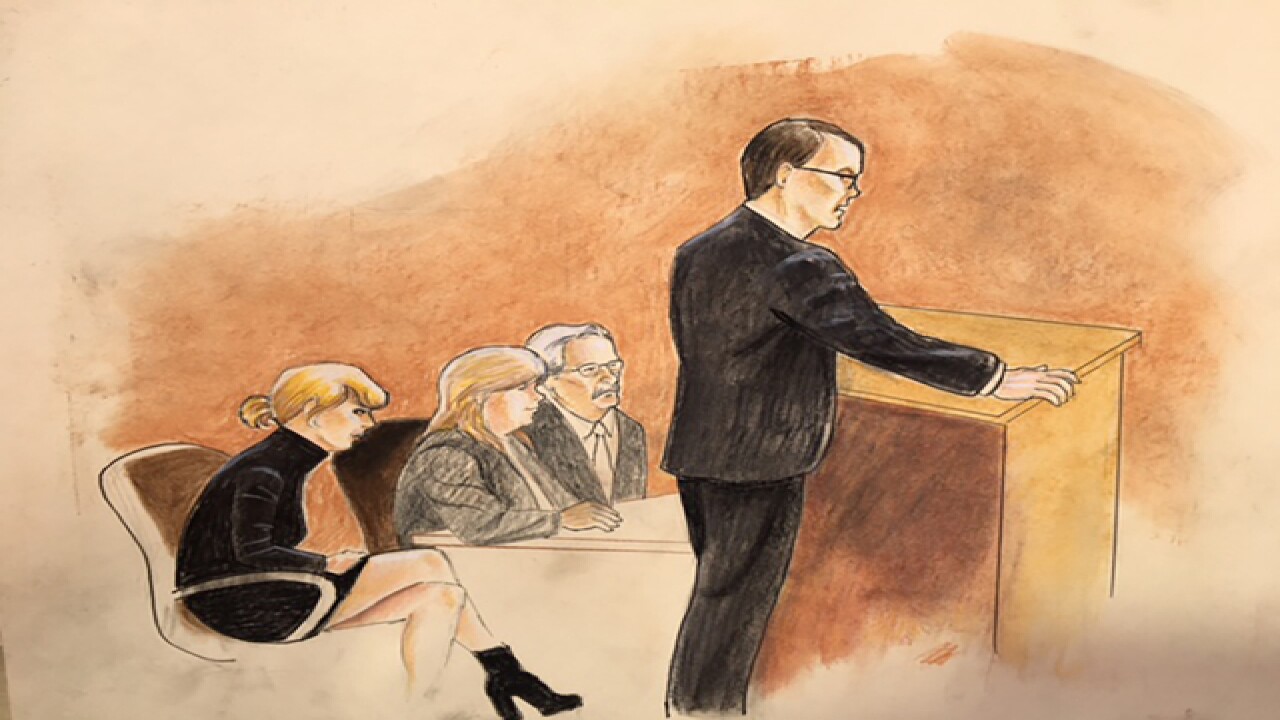 Jeff Kandyba
<p>Taylor Swift and her mother watch on as their attorney, Doug Baldridge, delivers closing statements on Monday, Aug. 14, 2017 in her trial involving a former Denver DJ accused of groping her before a 2013 concert in Denver. </p>

DENVER – A federal jury in Denver is now deciding whether a former Denver radio DJ groped Taylor Swift at a photo-shoot before a June 2013 concert, and whether Swift’s mother and manager influenced the decision by the DJ’s company to fire him because of the allegations.

Jury deliberations got underway around 1 p.m. Monday on the sixth day of the trial, and came after closing arguments from Swift’s attorney, Doug Baldridge, and DJ David Mueller’s attorney, Gabe McFarland. They also came after a conference in which the attorneys and judge decided on the jury instructions.

Read the jury instructions in the case here.

The closing arguments from each side mirrored what they each pushed for during the four days of witness testimony and cross-examination. Taylor Swift rolled her eyes at much of Mueller's attorney's statements, and also cried on several occasions as both attorneys recounted the alleged incident.

McFarland was the first to go, and laid out his reasoning why David Mueller did not grab Swift’s rear end on June 2, 2013, and why Andrea Swift and Frank Bell allegedly got Mueller fired from the Denver radio station, KYGO.

“I don’t know what kind of person grabs a woman…but it’s not that guy,” McFarland said, pointing to Mueller. “It’s not the guy who files a lawsuit and…fights to clear his name for two years, and it’s not a guy who grabs or gropes a superstar apparently out of the blue.”

He brought up the notorious photo of Swift, Mueller and Mueller’s girlfriend, Shannon Melcher, and told the jury there was “no way” Mueller’s hand was under Swift’s skirt—contending that her skirt isn’t ruffled in the photo and that Mueller’s hand wasn’t “low enough” to be under her skirt.

He went on to call Stephanie Simbeck, who took the photo, the “least credible witness” at the trial, saying her testimony made “no sense whatsoever” and that thus, the Swift team’s story doesn’t add up. He said that Simbeck was only making her testimony because she still works for Swift and that she “wants to keep that job.”

“Nobody saw what Ms. Swift said happened because it didn’t happen,” McFarland argued.

McFarland also argued that Mueller never changed his story, as multiple witnesses have alleged, and that Mueller “didn’t do it for money,” referring to the filing of the lawsuit, because he wouldn’t want to jeopardize his “dream job” at KYGO.

“Why would Ms. Swift lie? I don’t know,” McFarland said. “I’m sure she thinks it’s true, but the photograph shows otherwise.”

And he maintained that Andrea Swift and Bell directly influenced KYGO general manager Bob Call to fire Mueller over the allegations when Bell told Call he expected KYGO to “take action” and “do the right thing.”

“All of those terms are code for, ‘We want you to fire this guy.’ There’s no other way to read that,” McFarland said.

But Swift’s attorney, Doug Baldridge, flipped McFarland’s claims on their head immediately, and laid out the case as a sexual assault instance that many women have dealt with.

“Will aggressors like David Mueller be allow to victimize their victims is what the question is,” Baldridge said. “Will they be allowed to shame them, humiliate them, assault them? And to use the words of Andrea Swift, I don’t know whether to vomit or cry.”

“Will aggressors like David Mueller be allowed to realize a payday for their conduct…just because they know they can walk away with it…because the victims will pay?” he continued.

Baldridge argued there’s no “facts, incentive, or reason whatsoever” to believe that Swift “made up this story” that Mueller grabbed her.

He said, based on Mueller’s testimony, that Mueller admitted that KYGO had a right to investigate and fire an employee who was accused of sexual assault if it were founded on evidence.

“Gone. Case was over when he did that,” Baldridge said.

And he said that his case and witness testimony has been “written in granite” since the incident occurred.

“Everything is consistent—whether it’s the reaction of her face, the movement of the skirt, the pulling away in the photo—people told you what they saw, and it was all consistent,” Baldridge said. “The overriding question is: is the victimization going to stop here or is it going to go on?”

He continued to frame the case for the jury as one involving the alleged assault of a woman.

And in a somewhat-mocking moment of McFarland, Baldridge pulled up a “photo lineup” he’d made of the photo with Swift and Mueller, alongside 18 other photos from that day. McFarland made it a point during his questioning of Swift’s bodyguard, Greg Dent, that no “photo lineup” was done like they are in police lineups.

“Here we have it. We have all the photos. Aha!” Baldridge said sarcastically when he pulled up the photo.

“Clearly Taylor Swift had no idea that this guy, the guy with the smile—boy, she must have confused Mr. Mueller with one of these little girls or boys. It’s an insult,” Baldridge said. “I think it’s crystal clear there’s not a chance she misidentified this man in the line.”

To try and reiterate his point that the jury should not find that Andrea Swift and Bell influenced Mueller’s firing, he said that Swift noted they had decided as a group to inform Call of the alleged incident.

He said the decision to fire Mueller was solely Call’s, Haskell’s and KYGO’s.

Baldridge said “it’s ridiculous” to claim that nothing is happening in the photo, and noted that Swift said the photo captured “a moment in the process” of Mueller grabbing her rear end.

“Everyone is clear that they saw something weird there,” Baldridge said, including Mueller.

To sum up his statements, Baldridge made a final plea to the jury that the case makes a difference for women everywhere.

“The single dollar I ask you to award her…is of immeasurable value. It means no means no. and it tells every woman that they will determine was is tolerated with their body,” he said. “The guy did it. Don’t be fooled. Don’t be snookered. It’s time to stop the victimization of victims in this courtroom and in this country.”

Now that the case is with the jury, they will have to decide on the one claim Mueller still has against Andrea Swift and Frank Bell, and the two claims—assault and battery—that Taylor Swift still has going forward in her counterclaim against Mueller.

The jury will have to reach a unanimous verdict, as the case is a federal civil trial, and all answers to the following jury questions will have to be answered “based on a preponderance of evidence”:

There are several possible outcomes here.

First, the jury could find that Andrea Swift and Bell interfered with Mueller’s employment contract, and could award him a maximum payout of more than $200,000 (which is based off the remainder of his employment contract salary and endorsements, minus what has already been paid out by KYGO).

But they could also find—even if Swift and Bell interfered—that Mueller only deserves “nominal damages” of $1.

The jury could also decide in Swift and Bell’s favor on that claim.

Should the jury find that Mueller assaulted or battered Swift, she would only be rewarded $1 in nominal damages.

The jury is staying in their deliberation room until they have a verdict. If jurors don’t have one by 5 p.m. Monday, they will be sent home for the day and ordered back at 8:30 a.m. Tuesday, when they will be sent to deliberate further.

The parties and their attorneys have in the meantime been asked not to be more than 15 minutes away from the courthouse while deliberations are ongoing should the court have to reconvene if the jury has a question or a verdict.