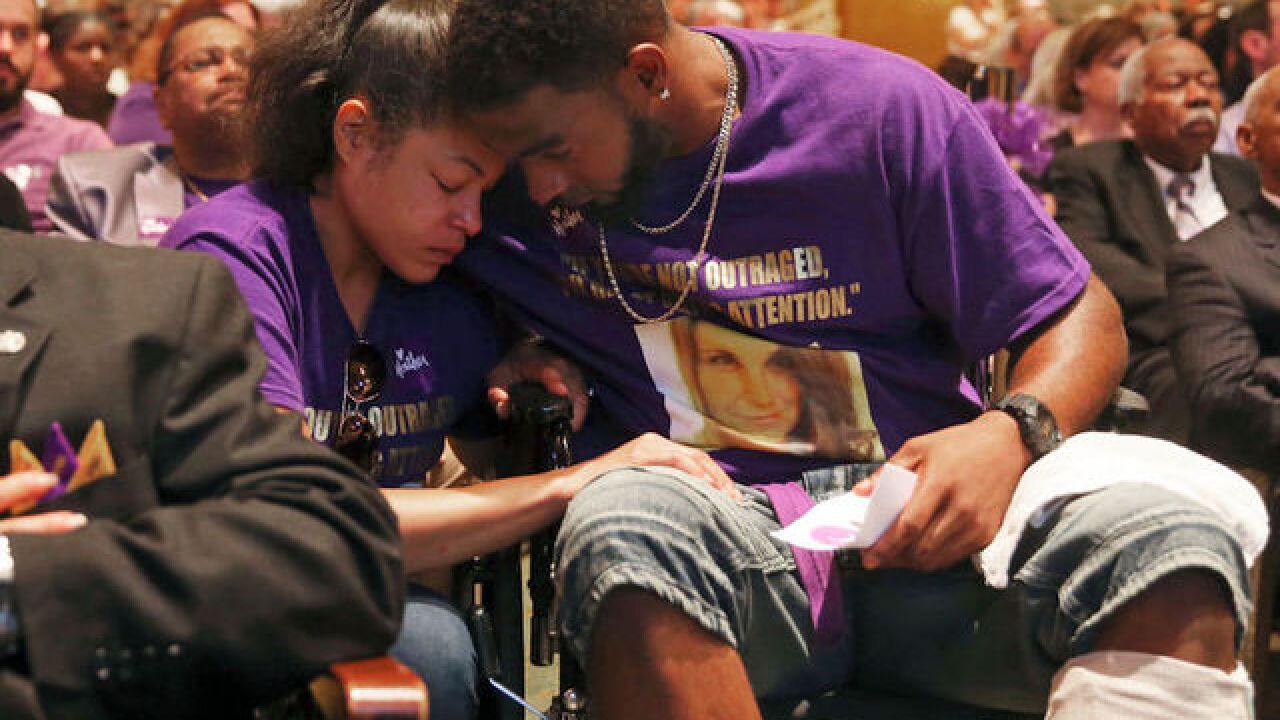 Image copyright 2018 Getty Images. All rights reserved. This material may not be published, broadcast, rewritten, or redistributed.
Pool
<p>Marcus Martin (R) hugs his fiance Marissa Blair during a memorial for Heather Heyer at the Paramount Theater on August 16, 2017 in Charlottesville, Va. Heyer was killed Saturday, when a car rammed into a crowd of people protesting a white nationalist rally. </p>

James Alex Fields, Jr., who was arrested in Charlottesville last August, was indicted on 30 counts, including a hate crime resulting in death and bodily injury, and racially motivated violent interference with "federally protected activity."

The indictment adds a new federal civil rights dimension to the case that captured the nation's attention when supremacist groups descended on the Virginia city and violent clashes erupted.

Prosecutors say Fields killed Heather Heyer, a 32-year-old Charlottesville paralegal, and injured others who were demonstrating against the "Unite the Right" rally. The event drew self-described "white nationalists" and other organizations who opposed the city's decision to remove a statue of Confederate Gen. Robert E. Lee from Emancipation Park.

"At the Department of Justice, we remain resolute that hateful ideologies will not have the last word and that their adherents will not get away with violent crimes against those they target," said Attorney General Jeff Sessions in a statement Wednesday.

"Last summer's violence in Charlottesville cut short a promising young life and shocked the nation. Today's indictment should send a clear message to every would-be criminal in America that we aggressively prosecute violent crimes of hate that threaten the core principles of our nation."

Fields already faces state first-degree murder and malicious wounding charges and the case was set for a trial this fall.

Surveillance video from the scene showed a Dodge Challenger stopping about a block and a half away from the protesters, reversing, then driving into the crowd before speeding away in reverse.

Fields could not be seen driving the car, but aerial footage from Virginia State Police showed him getting out of the car and on the ground after the collision.