She told her friend to 'run fast', but the tsunami swept her away 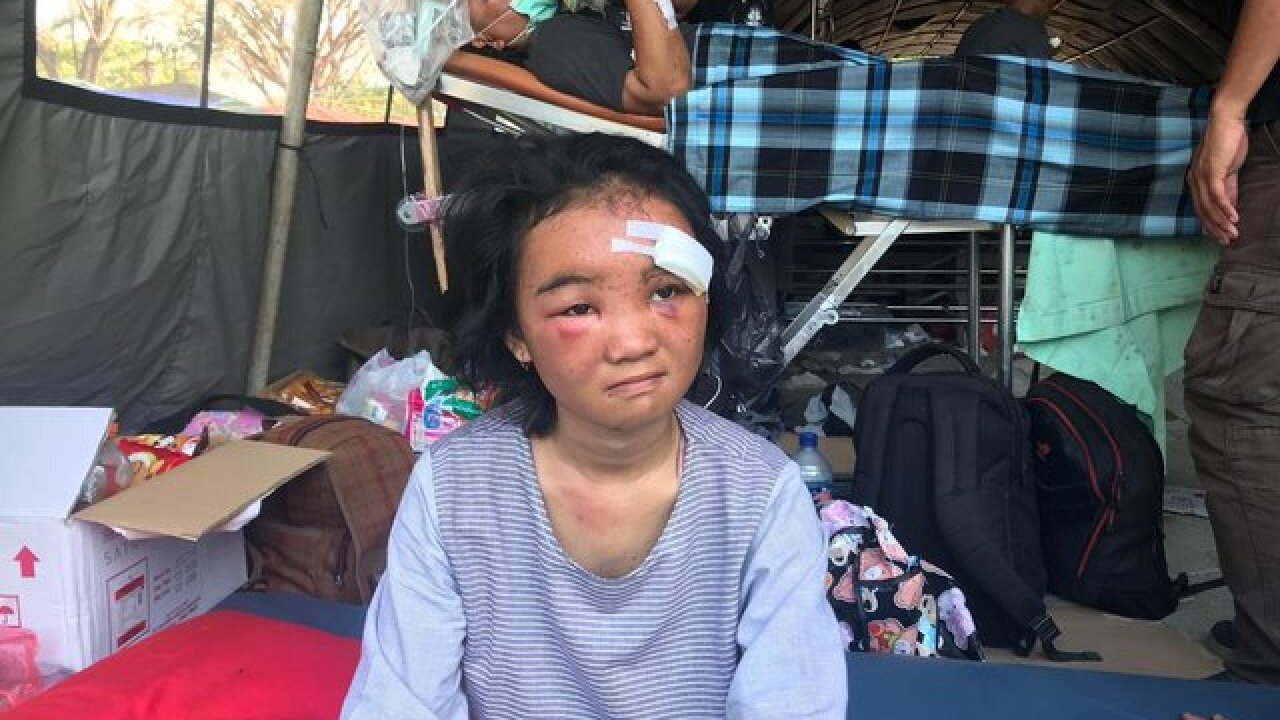 © 2018 Cable News Network, Inc.
CNN
<p>Puteri Pratiwi, 18, was riding home with her cousin when the earthquake struck on Friday.</p>

Puteri Pratiwi was riding home with her cousin, Ita, late on Friday night in her hometown of Palu when she felt the ground shudder beneath her.

The 18-year-old fell to the ground and was still sitting in shock when she saw the monstrous wave surging up the bay toward her city.

"I shouted at my friend, 'Let's run fast! Run!' We ran but she turned back to save the motorbike," Puteri told CNN from her hospital bed outside the Undata Hospital in Palu. She survived the tsunami holding onto a pillar. Three days later, she found out her cousin had been swept away and died.

Puteri is just one of many patients being cared for at Palu's overloaded hospitals, as authorities struggle to deal with the aftermath of a three-meter-high (10 foot) tsunami that struck Sulawesi after  a 7.5-magnitude earthquake on Friday.

Authorities said 1,234 people have been confirmed dead in the twin disasters, but the number is almost certain to rise.

Dozens of bodies lined the streets of Palu -- a city of more than 350,000 people -- over the weekend, and authorities have started to bury many of them in mass graves to prevent the spread of disease.

Even now, at the Undata Hospital, more than 100 corpses are still lying in the yard outside the hospital days after the initial quake. The stench of rotting flesh can be overpowering if the wind blows in the wrong direction.

The hospital's director, Dr. Komang Hadi Sujendra, said the one facility alone had received more than 200 bodies since the tsunami.

"It's dangerous for the bodies to stay here, for our patients and staff," he said.

Afraid to go inside

The scene on the ground in Palu is beyond chaotic as Indonesia's emergency services scrabble to restore access as well as food and water supplies to the remote communities.

An estimated 2.4 million people have been affected by the disaster, according to Indonesian National Board for Disaster Management spokesman Sutopo Purwo Nugroho. About 600 were badly injured, he said, and at least 48,000 people have been displaced.

Some survivors waiting for aid have taken matters into their own hands and entered shops, wheeling away trolleys filled with food and water. At a gas station, people could be seen opening up a tank from underground and using ladles to extract fuel.

Coordinating Minister for Politics, Legal and Security Affairs H. Wiranto said some supermarkets had been encouraged to open their doors for free, accepting offers of government payback later.

With the ground still shaking from aftershocks, some people are still too afraid to go indoors. The region has been hit by 254 aftershocks as of 11 a.m. Monday, authorities said.

At the Undata Hospital, a stone's throw away from the dead, a number of patients are being treated on mattresses under a large tarpaulin outside.

While frantic rescue efforts continue, for some people all that remains is a long, painful wait. Housewife Nurjati Katili is looking after her nephew, 7-year-old Mohammed, whose mother and younger brother are missing.

"He's so sad. He says he is remembering his little brother a lot," Nurjati told CNN. "He doesn't want to eat. He feels so sad."

Disaster officials say the inability to reach the worst-affected areas has hampered their efforts. First responders are still struggling to reach survivors and bring much-needed food, water and medical supplies to those affected.

Authorities were unable to quickly deliver aid and the heavy machinery used to rescue survivors as a result of severe damage to roads and the Mutiara Sis Al Jufri Airport in Palu. The airport was closed for 24 hours after the tsunami but has since reopened to limited flights.

Thousands were gathered beside the runway waiting to board flights out of the area Monday. One man told CNN he had been there two days. A woman said she feared for her and her baby's safety because of looting in her neighborhood.

Across the region, rescue workers continue to dig through the rubble, sometimes by hand, in the hope of finding trapped survivors.

The regency of Donggala, home to more than 300,000 people and one of the areas closest to the quake's epicenter, was inaccessible until Monday.

The International Red Cross shared video of its team driving through the region, where it appeared most of the buildings along the coast were destroyed. The structures that were still standing had suffered significant damage.

"The situation in the affected areas is nightmarish. The city of Palu has been devastated and the first reports out of Donggala indicate that it has also been hit extremely hard by the double disaster," Jan Gelfand, head of the International Federation of Red Cross and Red Crescent Societies (IFRC) Country Cluster Support office in Jakarta, said in a statement.

In the residential area of Patobo, there are fears that many could have been killed when 744 homes were buried in mud, Nugroho said Monday.

One of the most devastating scenes was found at the Roa Roa hotel, where workers raced to rescue some 50 people believed to be trapped under what was left of the eight-story building. Photographs from a drone above appeared to show the hotel had collapsed on its side.

As of Sunday, authorities had recovered one survivor and one person who died in the collapse, according to Nugroho. Video he posted to Twitter showed orange-clad responders carrying an individual on a stretcher through the rubble.

Indonesia President Joko Widodo visited the disaster site Sunday and said the priority is to evacuate survivors and help aid workers bring in food and fresh water. He has authorized the country to request international aid relief.

So far, 10 countries have offered assistance, according to Nugroho. The European Union and South Korea have offered $1.7 million and $1 million respectively, while the Australian government has said it's working with Indonesia to identify options for assistance.