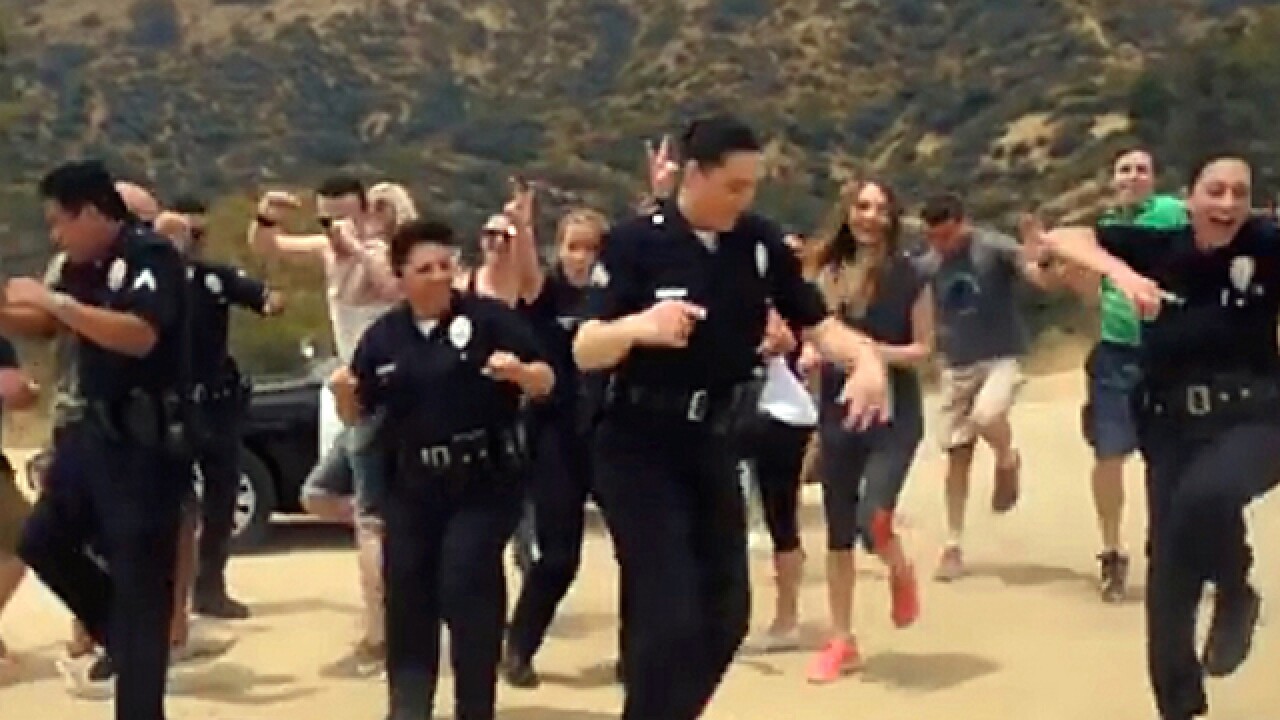 <p>In this undated frame from video provided by the Los Angeles Police Department, LAPD officers and others dance beneath the iconic Hollywood Sign in Los Angeles. In a now-viral sensation, police officers across the U.S. are dancing an updated version of the running man to a catchy 1990s hip hop song, "My Boo" by Ghost Town DJ's, in videos that have included professional sports mascots, cheerleading squads and at least one explosion.</p>

LOS ANGELES (AP) — In an online sensation, police officers across the U.S. are dancing an updated version of the running man to a catchy 1990s hip hop song in videos that have included professional sports mascots, cheerleading squads and at least one explosion.

The videos, set to "My Boo" by Ghost Town DJ's, began in early May after police in New Zealand issued the Running Man Challenge to the New York Police Department. The meme started with two teenagers in New Jersey and became viral after college basketball teams picked it up.

The police videos posted on the Internet have been steadily getting more elaborate and more popular, with even some police chiefs joining in.

Los Angeles officers filmed themselves dancing inside the Dodgers baseball stadium and at a popular hiking spot in the shadow of the Hollywood sign. Detroit officers did their dance after spilling out of a heavy-duty SWAT truck in front of a General Motors building, and Miami's men and women in blue threw in some salsa moves to Gloria Estefan's "Conga."

The videos are about more than officers cutting loose. They come as police departments across the U.S. are facing increased scrutiny and public criticism in the wake of a series of officer-involved deaths of young, unarmed black people.

Many departments have been working to become more community-friendly and improve their image. That includes turning to the power of social media.

"Across this nation, there's a lot of anti-police rhetoric," Detroit police Chief James Craig told reporters this week. "Do you believe this might have a profound impact on reducing that? I mean, you talk about how many shares so far? People like it, they appreciate it, and this is a move in the right direction."

In his department's video, one of the most popular with seven million views since Tuesday, Craig busted moves underneath the city's iconic Joe Louis fist. In a move parodying a mic drop, Craig then dropped a police belt and challenged Chicago, Philadelphia and Cincinnati, Ohio. He has also challenged New York and Los Angeles, indicating their videos aren't good enough.

Police departments are smart to take on the challenge, said Robert Thompson, a Syracuse University professor and a leading authority on American pop culture.

"This is a rhetorical act of public relations. No question about it," he said. "Having the police force, uniformed police especially, smiling and dancing with people within the context of these communities, is certainly a positive message.

"It's what a Coca Cola ad does, what a propaganda film does, what a public relations campaign does — try to make us think differently about something," he said.

The videos have drawn criticism from some who question the use of police resources. Mostly, the response has been positive.

"Just when I thought my faith in the police was over," Los Angeles resident Trayvon Walker commented on the LAPD's video. "They do a video like this that puts a smile on my face and makes me look at them and say, 'They're not so bad of people after all.'"

As a young, black man, Walker said he has experienced police discrimination and his view of officers has eroded in recent years. But he said the video reminded him that there are plenty of good cops.

"It doesn't change my perception of the police, but I do think more of them in the community doing positive things will lead to more positive outcomes," the 29-year-old court clerk said in a phone interview. "To be able to see LAPD, or just police in general, doing something that is good for our community — it's pleasant to see."