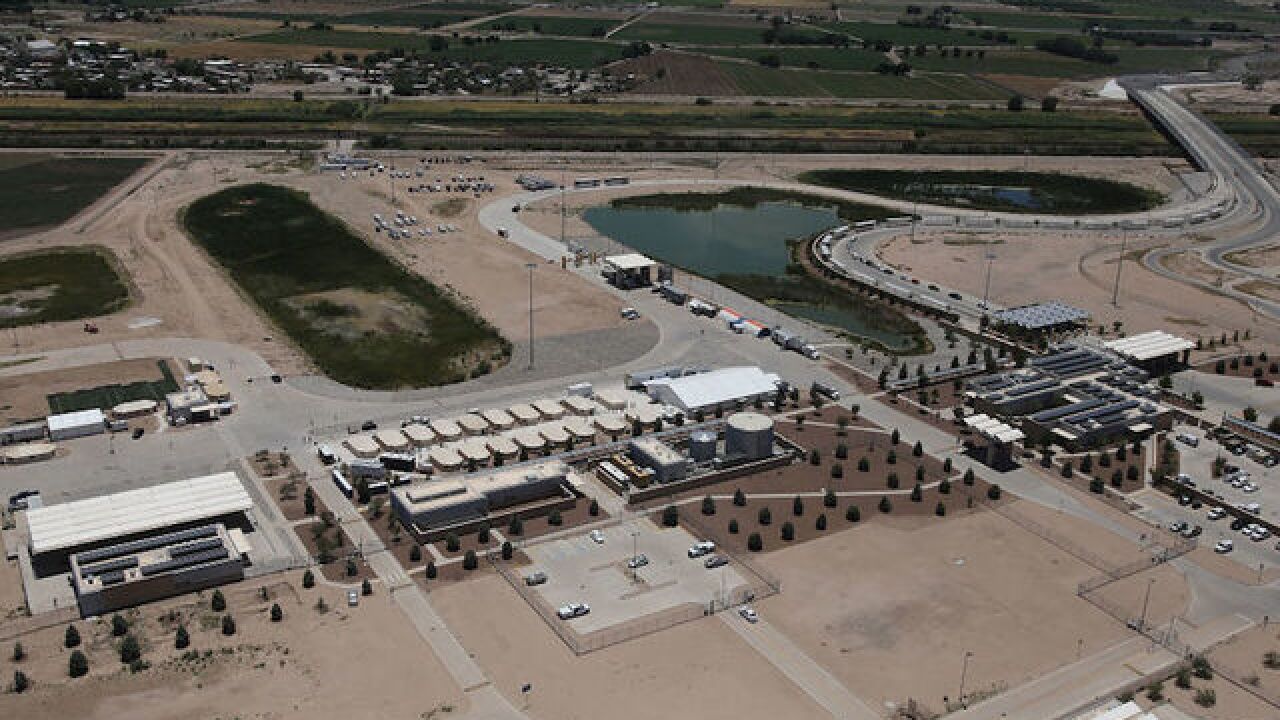 Image copyright 2018 Getty Images. All rights reserved. This material may not be published, broadcast, rewritten, or redistributed.
Joe Raedle
<p>A tent encampment holding children of immigrants is seen recently built near the Tornillo Port of Entry on June 19, 2018 in Tornillo, Texas. Looking past the tent encampment is the U.S/Mexico border. The Trump administration is using the Tornillo tent facility to house immigrant children separated from their parents after they were caught entering the U.S. under the administration's zero tolerance policy.</p>

Republicans across Capitol Hill are deeply divided over how to stop families from being separated at the border, as the House could vote as soon as Thursday on two immigration bills -- the first time in years that GOP has tried to address a broad solution on the issue that has split the party.

Leadership in the Senate and the House appear to mulling conflicting approaches for how to handle the situation at the border -- whether to go big with a broader immigration package or go narrow on a specific bill addressing family separation.

House Speaker Paul Ryan repeated Wednesday that his chamber is planning to vote in 24 hours on a pair of bills, one bill a conservative option without enough support to pass and another a broader immigration package that includes language to keep families together while they're processed at the border. GOP leaders are backing that option though it also lacks support it needs as of Wednesday morning.

"The administration wants Congress to act and we are," Ryan told reporters Wednesday, adding, "I hope we will be able to pass this tomorrow."

House leadership doesn't have the votes yet on their broader package, a fact that Rep. Tom Cole, a member of the GOP whip team, confirmed Wednesday morning to reporters. While leaders had long said that the conservative bill likely wouldn't pass, the question is whether they can convince members to get behind a compromise bill, which includes $25 billion in border security funding including money for the wall, a path to citizenship for recipients of the Deferred Action for Childhood Arrivals program and a fix to address in part family separations at the border.

Ryan would not address what Plan B is if if the compromise legislation does not pass in the House. He quipped "this bill is Plan B" and would not answer if he would entertain a standalone, narrow bill focused just on family separation -- as Senate Republicans are considering — saying only that they would "cross that bridge" when they come to it.

House Majority Leader Kevin McCarthy tried to present this compromise bill as the only option.

House Republicans on both the moderate and conservative side of the conference have expressed concerns, a potentially large enough number to sink the bill if House leaders can't change minds rapidly over the next few hours.

"I think getting this compromise bill to the finish line is going to be a lot more challenging than I would have anticipated," said Rep. Ryan Costello, a Republican from Pennsylvania.

The conservative House Freedom Caucus is also holding out votes.

"I think from my standpoint, we need to keep working on it," said Rep. Scott Perry, a conservative from Pennsylvania.

House leaders had hoped that Trump's visit to Capitol Hill Tuesday evening would help move at the very least conservative members in their direction, but according to multiple members and aides in the room, Trump's presentation was classic Trump: a bit disjointed, wide-ranging and not all that clear about why or how much he was backing each immigration proposal.

"We've been burned too many times by him to just go all in because he showed up," one House GOP member who is still on the fence told CNN. "He was good -- said he was behind us, that he loved us, but it wasn't a game changer by any means."

The Republican Study Committee, a group of conservative lawmakers, was expected to meet Wednesday afternoon to decide on their position, but RSC Chairman Mark Walker, a Republican from North Carolina, said that members want Trump to be more clear about where he stands.

"I think there were some requests on making sure he is publicly 100% behind the second bill as well," Walker said. "They want a more concrete, strong Mr. President, you are certainly behind this and I think that's what you will see."

The rush for House votes, of course, is just part of the equation. Over in the Senate, Majority Leader Mitch McConnell told reporters Tuesday that all the members of his conference supported finding a solution to family separations at the border, but what that looks like is unclear, and that worries their counterparts in the House.

Another complicating factor is that Democrats would be needed to pass anything in the Senate and how much Democratic support GOP Senate leaders could count on is at best unclear. Many Democrats have consistently put the blame back on Trump to reverse his "zero-tolerance" policy that has led to the current issue along the border.

"Mr. President, have a heart for a change," Hawaii Democratic Sen. Mazie Hirono said Tuesday. "Take that God damn pen of yours and do away with this horrendous, inhumane policy of yours that rips children from the arms of their parents."