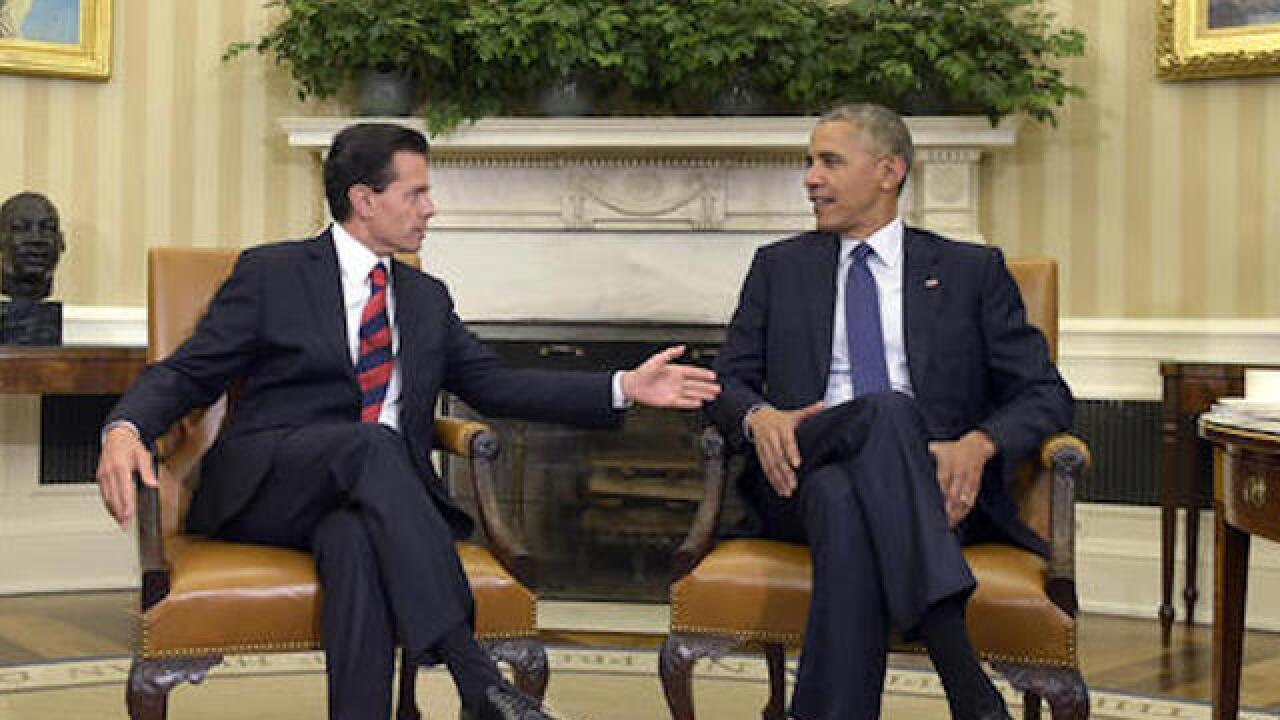 WASHINGTON (AP) — President Barack Obama fiercely rejected Donald Trump's depiction of an America in crisis on Friday, arguing that violent crime and illegal immigration have plunged under his leadership to their lowest rates in decades.

Looking to November's election, Obama said, "We're not going to make good decisions based on fears that don't have a basis in fact."

At a news conference alongside Mexico's president, Obama sought to undermine two pillars of Trump's speech Thursday night in which he accepted the Republican presidential nomination. Trump said that if he is elected, "safety will be restored" at home and abroad.

"This idea that American is somehow on the verge of collapse, this vision of violence and chaos everywhere, doesn't really jibe with the experience of most people," Obama told journalists.

The violent crime rate, he said, has been lower during his presidency than any time in the last three or four decades. While he acknowledged an uptick in murders in some U.S. cities this year, Obama said the violent crime rate today is still far lower than when Ronald Reagan was president in the 1980s.

Obama used the same marker for immigration, describing today's rate of illegal border crossing as only a third of what it was during the Reagan administration, and lower than at any time since.

Speaking after an evening in which Trump laid out his case to be the next commander in chief, Obama grimaced noticeably when a reporter suggested the billionaire businessman's message appeals to working-class Americans.

"It's not really clear how appealing it was," Obama said.

Obama said he will let the U.S. public decide if the vision of Republicans or Democrats for the nation is more persuasive. Hillary Clinton, Obama's 2008 primary rival and then his secretary of state, will receive the Democratic nomination next week. She is expected to announce her running mate soon.

Still, Obama sought to paint a contrast between Trump's picture of rising crime and uncontrolled borders and the brighter reality he sees.

He said he hopes people walked outside the next day to chirping birds and sunny skies, essentially accusing the Republican candidate of fearmongering and distracting from the "real issues" of jobs, inequality, wage stagnation, education, the budget and the tax system.

Mexican President Enrique Pena Nieto, for his part, tried to exercise restraint, saying he is ready to work with whoever prevails in the presidential election. Previously, he had likened Trump's language to that of Adolf Hitler or Benito Mussolini, though he said such comparisons were taken out of context.

Trump on Thursday repeated his assertion that he would build a wall across the U.S.-Mexican border "to stop illegal immigration, to stop the gangs and the violence, and to stop the drugs from pouring into our communities." At one point, the crowd chanted, "Build that wall."

Of the U.S. presidential campaign, Pena Nieto said, Mexico "will not give its opinion; it will not get involved."

Instead, he showered Obama with praise, calling him a "very good neighbor" and saying U.S.-Mexican relations are in one of their best ever periods.

Obama said the "heated rhetoric" of the political season shouldn't overshadow the strong cultural and commercial ties between the two North American neighbors.

Some $1.5 billion in cross-border trade and investment occurs daily, he said, supporting 1 million U.S. jobs. Friday's announcement of a new air transport agreement will open more U.S.-Mexican flight routes. Energy talks are planned for later this year. And Mexico and the U.S. will co-host refugee talks at the U.N. in September.

Obama said the two countries both want to see the Trans-Pacific Partnership trade agreement enter force so that it puts workers across the Asia-Pacific region on a level playing field.