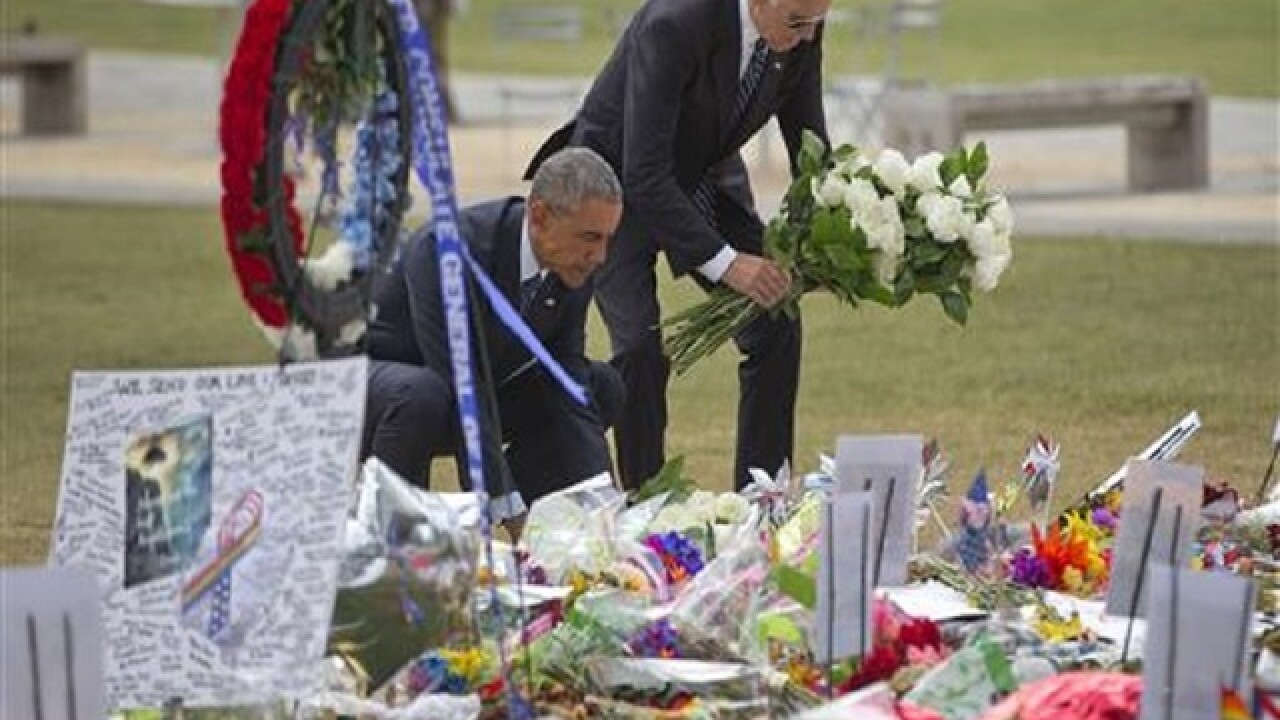 By: Associated Press
Posted at 8:08 PM, Jun 16, 2016
ORLANDO, Fla. (AP) — Embracing grieving Orlando families and appealing anew for national action, President Barack Obama claimed a threat to all Americans' security Thursday as a strong reason to tighten U.S. gun laws. Counterterror campaigns overseas, he declared, can never prevent all "lone wolf" attacks like the one that killed 49 people in Orlando.
Speaking at a makeshift memorial to the victims, Obama said the massacre at a gay nightclub was evidence that "different steps" are needed to limit the damage a "deranged" person set on committing violence can do. He cheered on Democrats' push for new gun control measures, including a new ban on assault weapons and stricter background checks.
Although he showed little hope the measures would find much support among most opponents, Obama seemed to be aiming for other lawmakers, perhaps Republican hawks eager to get behind counterterror campaigns but steadfastly opposed to gun restrictions.
Obama arrived as Orlando began the next stage of its grief — funerals all over town. A visitation for one victim, Javier Jorge-Reyes, on Wednesday night turned out a crowd of friends, family, drag queens and motorcyclists to pay their respects.
"We're just here to spread love and joy and try to put an end to all the hate," said Ezekiel Davis — or, as he's known to some, Sister Anesthesia Beaverhausen. Obama could not miss other signs of a community coming together in tragedy. Hundreds of people gathered in 95-degree heat outside the Amway Center stadium where he met with families.
Brittany Woodrough came to honor her close friend, 19-year-old Jason Benjamin Josaphat.
"I just pray for his family and I can't believe this happened," she said. "Seeing President Obama here makes it real."
Orlando's calls for solidarity stood in contrast to the sharp-edged political debate in Washington and the presidential campaign trail that continued during Obama's visit.
Arizona Sen. John McCain, a Republican and frequent Obama critic, accused the president of being "directly responsible" for the shooting because, he said, Obama had allowed the growth of the Islamic State group on his watch. McCain quickly walked back those comments with a written statement saying he had misspoken and was referring to Obama's "national security decisions, not the president himself."
The gunman, Omar Mateen, had made calls during the attack saying he was an IS supporter. But CIA Director John Brennan said Thursday the agency has found no connection between the gunman and any foreign terrorist organization.
In Orlando, Obama noted the need for strong efforts to fight terrorists before they can get to America, but he said that's not enough.
"It's going to take more than just our military," he said. "We will not be able to stop every tragedy. We can't wipe away hatred and evil from every heart in this world, but we can stop some tragedies. We can save some lives.
"We can reduce the impact of a terrorist attack if we're smart," he said, a reference to a ban on assault-type weapons that can kill dozens of people in moments. Mateen was armed with a Sig Sauer MCX assault rifle.
Obama made his remarks in downtown Orlando during an afternoon visit to express condolences to this grieving city. The president spent roughly two hours talking privately with victims' families and survivors of the attack in a gay dance club. He told them he was inspired by their courage and felt their pain at the loss of so many young lives.
"Our hearts are broken, too," he said.
Elsewhere in the city and in Washington, investigators were working to reconstruct the movements of the 29-year-old shooter before he opened fire at the Pulse dance club, including what his wife may have known about the attack. The Senate Homeland Security Committee's chairman sent a letter to Facebook asking for help with messages denouncing the "filthy ways of the west" left on Facebook accounts believed to be associated with Mateen before and during the attack.
In his remarks, Obama also expressed solidarity with gays and lesbians who were targeted at the nightclub.
"This was an attack on the LGBT community. Americans were targeted because we're a country that has learned to welcome everyone, no matter who you are or who you love," Obama said. "And hatred toward people because of sexual orientation, regardless of where it comes from, is a betrayal of what's best in us."
There were some signs of political unity: Florida Gov. Rick Scott, a Republican frequently at odds with Obama, greeted him on the airport tarmac. Florida Sen. Marco Rubio, also a Republican, traveled with Obama from Washington, along with Rep. Corrine Brown, a Democrat who represents parts of the city. Biden and Sen. Bill Nelson, D-Fla., joined Obama on the tarmac.
But there was no bipartisan unity on the need for new gun legislation. As the Democratic push continued, including a 15-hour filibuster from Sen. Chris Murphy, whose state of Connecticut shouldered the killing of 20 children in Newtown in 2012, Republicans said their response would focused on the threat posed by the Islamic State group.
As a result, the Senate faced the prospect of taking votes beginning next Monday on dueling Democratic and GOP legislation. A Democratic bill would keep people on a government terrorism watch list or other suspected terrorists from buying guns. A Republican version would allow the government to delay a gun sale to a suspected terrorist for 72 hours but require prosecutors to go to court to show probable cause to block the sale permanently.
Both bills were expected to fail.
"I truly hope senators rise to the moment and do the right thing," Obama said. "Those who defend the easy accessibility of assault weapons should meet these families and explain why that makes sense."
Copyright 2016 The Associated Press. All rights reserved. This material may not be published, broadcast, rewritten or redistributed.