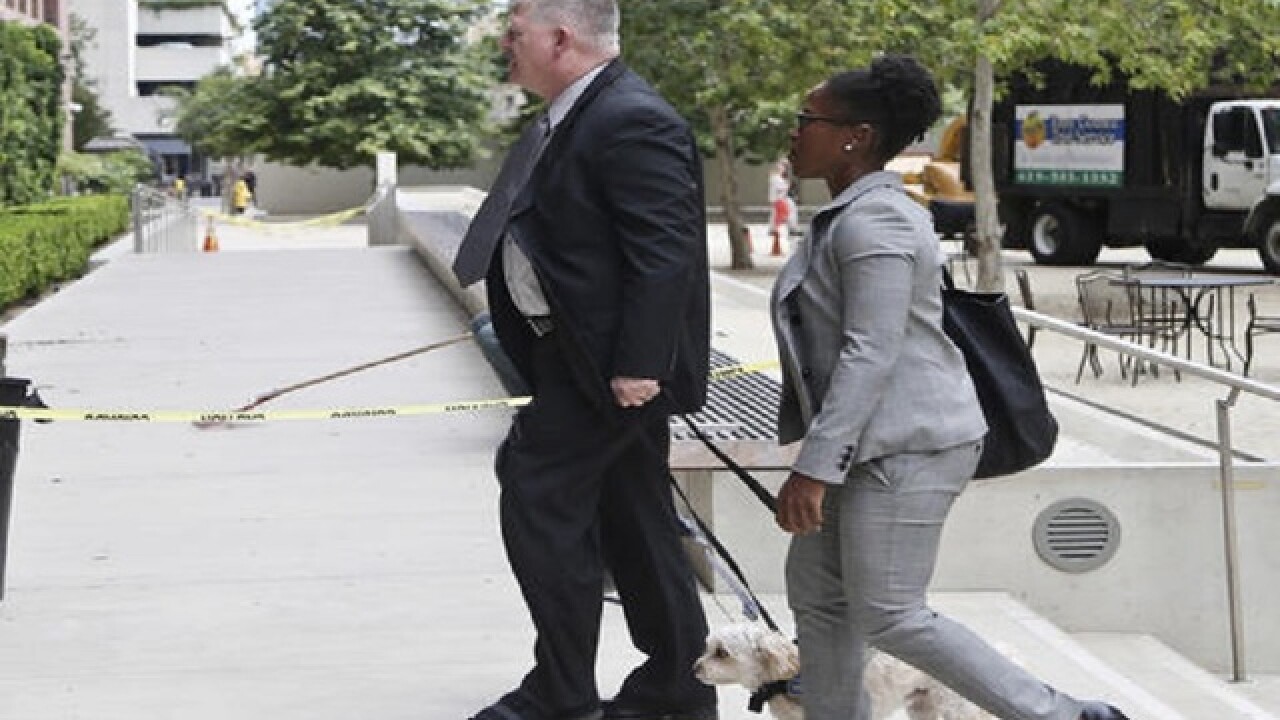 By: Associated Press
Posted at 9:19 PM, Jun 09, 2016
SAN DIEGO (AP) — A Navy admiral on Thursday pleaded guilty to lying to federal authorities investigating a $34 million fraud scheme involving a Malaysian contractor known as "Fat Leonard" — becoming the highest-ranking military official to be taken down in the wide-spanning scandal.
It is extremely rare for an admiral to even face criminal proceedings.
Rear Adm. Robert Gilbeau, 55, is believed to be the first active-duty Naval flag officer to be charged in federal court.
At a hearing in San Diego on Thursday, Gilbeau stood before the judge with a small, fluffy white service dog and told the court matter-of-factly that he was guilty as charged. He declined to comment after the hearing.
Prosecutor Mark Pletcher said more will come out at his sentencing hearing Aug. 26 when the evidence will show Gilbeau's "pervasive attempt to mislead the investigation."
Pletcher said it will also show how he continued to "deny the nature of his relationship" with Leonard Glenn Francis, who has admitted to bribing Navy officials with more than $500,000 in cash, prostitutes, luxury hotel stays and a staggering amount of others gifts in exchange for classified information to help his company, Glenn Defense Marine Asia.
Francis' company — which has provided fuel, food and other services to Navy ships in Asia for two decades — overbilled the maritime branch by more than $34 million, according to court documents.
Gilbeau was not charged like other Navy officials with accepting any bribes. Pletcher said the charge coincided with the evidence and the admiral was being treated like any other defendant "irrespective of his rank."
So far 14 people have been charged in the case — including 11 current or former U.S. Navy officials. Half have pleaded guilty. They include a commander who was sentenced to 78 months and ordered to pay $95,000 in restitution to the Navy after admitting he redirected ships to ports where Glenn Defense Marine Asia could grossly overcharge the Navy.
According to the plea agreement, Gilbeau admitted that he lied when he told investigators that he had never received any gifts from Francis, nicknamed "Fat Leonard," because of his wide girth.
Gilbeau told investigators that he "always paid for half of the dinner" when he and Francis met about three times a year. He also destroyed documents when he learned of the probe in September 2013, according to the plea agreement, according to court documents.
Francis has been convicted and is awaiting sentencing.
Prosecutors can recommend 12 to 18 months in jail for Gilbeau, according to a plea agreement. But defense attorney David Benowitz said he would "fight hard" to ensure his client — a decorated Naval officer — does not spend any time behind bars.
The maximum sentence is up to five years in jail.
Three Navy admirals were censured for accepting from Francis extravagant gifts and dinners costing thousands of dollars.
Prosecutors have said they are investigating as many as 200 people but have declined to say whether any are of equal or higher ranking than Gilbeau.
Gilbeau has spent 37 years in the Navy and is still on active duty. He was awarded the Bronze Star and Purple Heart during the 2007 Iraq surge. His most recent post was a desk job working as a special assistant to the commander of the U.S. Naval Supply Systems Command. He was moved to the position after the Navy learned he was being investigated.
Before that, Gilbeau served from 2011 to 2013 at the Defense Contract Management Agency International, where he was responsible for the global administration of the Defense Department's most critical contracts outside the United States.
Adm. John Richardson, chief of naval operations, said Gilbeau failed to meet the expectations the United States has of its military members.
"It damages the trust that the nation places in us, and is an embarrassment to the Navy," he said.
Richardson said the Navy is fully cooperating with the Department of Justice in the investigation that has so far led to the convictions of more than a dozen people.
Copyright 2016 The Associated Press. All rights reserved. This material may not be published, broadcast, rewritten or redistributed.