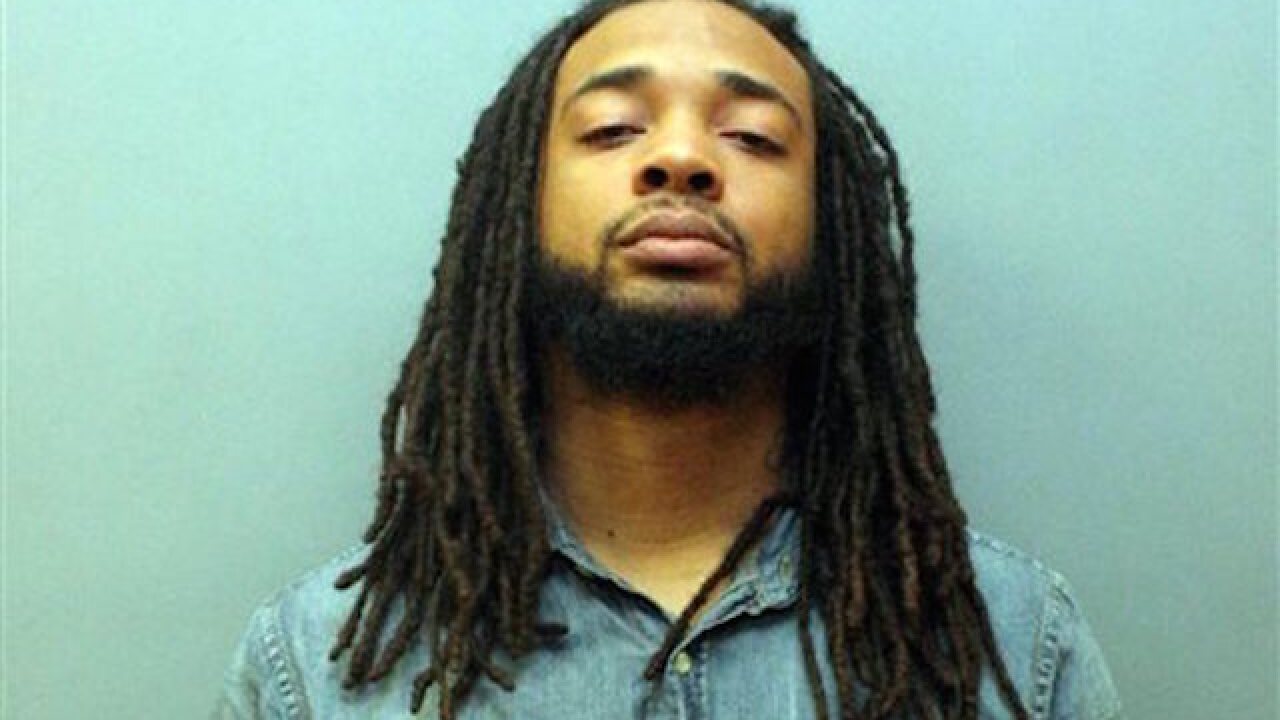 <p>This photo released by the Carrollton Police Department shows Shawn Nicholas Diamond. Police say Diamond was shot by an officer after making a threatening move toward him with a rock in each hand at Dallas Love Field told the officer, "You're going to have to shoot." At a news conference, Dallas Police Chief David Brown said Diamond was in stable condition at a Dallas hospital. (Carrollton Police Department via AP)</p>

DALLAS (AP) — A Maryland man newly released from being jailed on a criminal mischief charge remained hospitalized Saturday, a day after being shot by an officer outside a Dallas airport following an outburst in which police say he hit his ex-girlfriend and battered her car with a traffic cone and large landscaping rocks.

Police Chief David Brown said Friday that Diamond had rocks in his hands as he advanced menacingly toward an officer who had his gun drawn outside the Dallas Love Field terminal. Brown said Diamond was heard telling the officer, "You're going to have to shoot."

Diamond was released on bond earlier Friday after spending the night in a county jail, police in the Dallas suburb of Carrollton said. He was arrested Thursday after causing $3,700 in damage to city-owned trees by reckless driving, Carrollton police spokeswoman Jolene DeVito said.

He traveled to the Dallas area earlier in the week and the ex-girlfriend, who is believed to be the mother of his children, was driving him to the airport Friday so he could return to Maryland.

During the drive, Brown said, Diamond hit the woman. After arriving at the airport terminal, he said, Diamond was pulling his luggage from the woman's car when he grabbed a traffic cone, smashed the car's windshield with it, then began picking up large landscaping rocks nearby and hurling them through the car's windows.

Surveillance video shows an officer intervening and aiming his gun at Diamond as he starts to advance with the rocks. The video has no sound.

Diamond darts around the officer, who shoots him.

Another officer is seen on the video brandishing a stun gun he apparently never fired.

The officer who shot Diamond has been removed from patrol duty pending an internal review of the shooting, Brown said. The officer's name has not been released and Cordova said Saturday in an email that authorities didn't have any immediate updates on the investigation.

Ron Pinkston, president of the Dallas Police Association, did not immediately return an email seeking comment Saturday. In a tweet sent Friday on its Twitter account, the police union said the officer involved in the shooting "is ok."

Efforts to reach family members or friends of Diamond in Maryland were unsuccessful Saturday as some phone numbers were disconnected and messages left at other numbers were not immediately returned.

A video posted by Instagram user @flashyfilms— and credited to Bryan Armstrong also shows the commotion on the curb outside baggage claim at Dallas Love Field. The shooting can be heard in that video.

Amid the sound of nine gunshots and an officer's shouts to "get down," some people scramble while others stand watching before officers order them back inside. Toward the end of the video, one officer is seen pointing his gun at someone near the glass exterior of the airport.

Officials said one bullet hit an exterior glass wall and the rest hit the suspect. Dallas police Sgt. Mike Beattie, who is stationed at Love Field, said Friday that the bullet that hit the glass wall outside the airport's baggage claim area didn't penetrate it because of the protective film. One officer at the scene, who would not be named, said he was told that the victim "absorbed" all the other bullets.

Beattie said airport police receive specific training to be attentive to suspicious-looking travelers and that the Dallas Police Department provides "crowded-environment training" to all its officers every two years. Beattie said the officer who fired the shots is a Dallas police veteran, but he would not identify him.

Some airport operations were temporarily disrupted Friday, but the airport remained open. Spokesman Jose Torres said some people, after hearing shots, ran through security so everyone had to be rescreened.

Beattie said this is the first shooting in the 89-year history of Love Field, located a few miles from downtown.