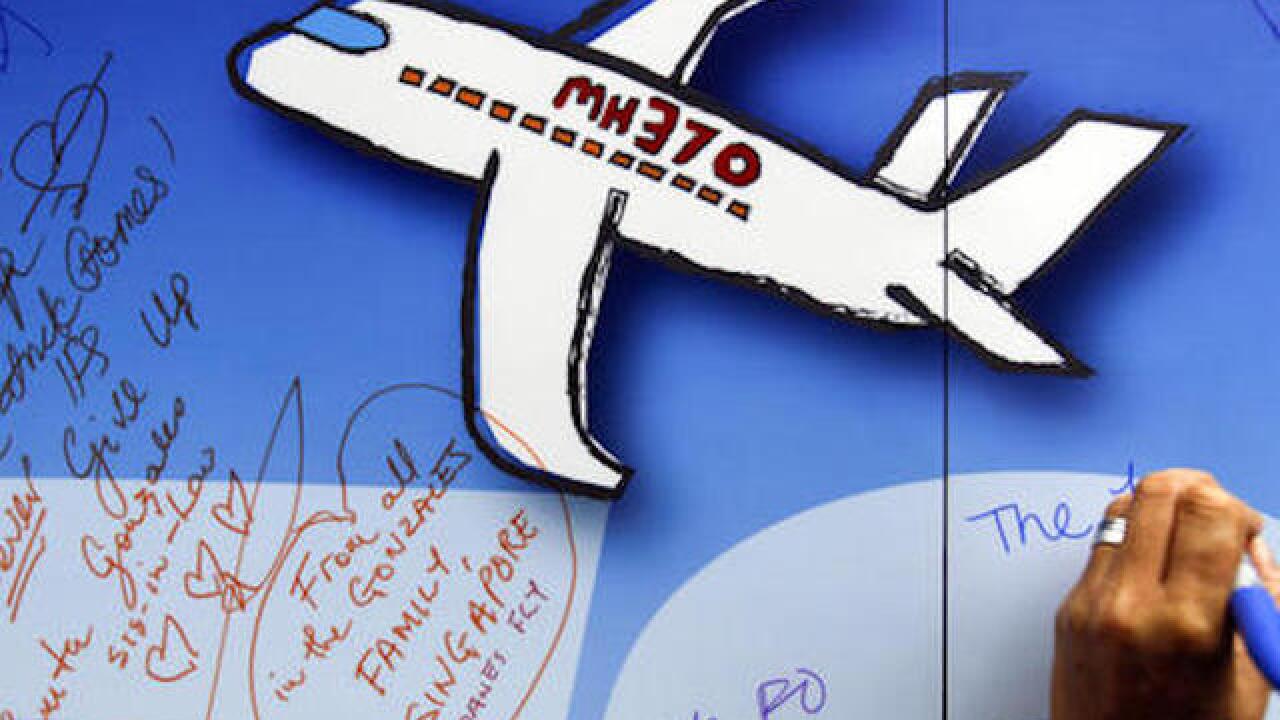 Copyright Associated Press
Joshua Paul
<p>In this March 6, 2016, file photo, well wishes are written on a wall of hope during a remembrance event for the ill fated Malaysia Airlines Flight 370 in Kuala Lumpur, Malaysia. Malaysia has confirmed one of the pilots of Malaysia Airlines Flight 370 had plotted a course on his home flight simulator to the southern Indian Ocean, where the missing jet is believed to have crashed. It's the first time Malaysia has acknowledged the route was on Captain Zaharie Ahmad Shah's simulator. (AP Photo/Joshua Paul)</p>

KUALA LUMPUR, Malaysia (AP) — Malaysia acknowledged for the first time that one of the pilots of Malaysia Airlines Flight 370 had plotted a course on his home flight simulator to the southern Indian Ocean, where the missing jet is believed to have crashed.

On Thursday, Transport Minister Liow Tiong Lai told local journalists that the flight path was found on the simulator. He also cautioned there were "thousands" of destinations on the simulator and no evidence that Zaharie flew the plane in that area or deliberately crashed it.

A recording of the news conference was made available to The Associated Press on Friday.

New York Magazine reported last month that an FBI analysis of the device showed Zaharie had conducted a simulated flight to the southern Indian Ocean less than a month before the plane vanished along a similar route. The magazine cited the discovery as strong evidence that the disappearance was a premeditated act of mass murder-suicide at the hands of the captain.

"Until today, this theory is still under investigation. There is no evidence to prove that Captain Zaharie flew the plane into the southern Indian Ocean," Liow said. "Yes, there is the simulator but the (route) was one of thousands to many parts of the world. We cannot just base on that to confirm (he did it)."

Liow didn't say when the Indian Ocean path was flown on the simulator. He stressed that international experts and Australian officials have agreed that the most likely scenario was "uncontrolled ditching" of the plane.

The latest development in the saga of the world's biggest aviation mystery unnerved families of the victims, who blame Malaysia for a cover-up and incompetence.

"It is sheer nonsense! I don't believe it at all. We were told in the past that both the plane and the pilots had no problem and now we are told there was something wrong with the pilot," said Li Xinmao, whose daughter Li Yan and son-in-law Luo Wei were among the many Chinese passengers on the flight.

"It is another irresponsible thing the Malaysian government has done to try to fool the relatives and cover up the truth and the conspiracy. We relatives strongly protest it and strongly demand the discovery of our loved ones," he said.

In Malaysia, Jacquita Gonzales, whose husband Patrick Gomes was a crew member, said there were many unanswered questions about the Indian Ocean flight path in the captain's simulator.

She said it was unclear when he last flew the route on the simulator. She also noted reports citing a private investigator that a flaperon — a small section of the wing that washed ashore on Reunion island off East Africa last year — was broken off, indicating controlled ditching of the plane.

"I am not blaming the pilot, but the government should be more forthcoming with information. Why is France still not releasing details on the flaperon after so long?" she said. "It's very frustrating. We are like yoyo going up and down all the time."

She also said police questioned all crew families in the early days of the tragedy and had told them that all crew members were cleared.

Liow said Thursday that French authorities were still waiting for documents from several parties including Boeing, and insisted on holding on to the wing part as court evidence.

Australia's Joint Agency Coordination Center — which is overseeing the search for the plane off Australia's west coast — has also said that evidence of the route did not prove that Zaharie had planned to steer the plane off course and showed only "the possibility of planning" for such an event.

Malaysia's national police chief, Khalid Abu Bakar, has said investigations will not be conclusive until the black boxes — the cockpit voice recorder and a data recorder — are recovered. He did not rule out a pilot suicide.

Malaysia has been criticized for being slow in providing information about the disappearance of the plane belonging to its national flag carrier.

"There is no clear reason why the Malaysian government is doing this, but it does seem to be connected with wanting the disaster to have as little impact as possible on the standing of the airline, which is already in deep financial trouble," said Damien Kingsbury, professor of international politics at Deakin University in Melbourne, Australia.

"Having one of its pilots intentionally ditch the plane in the ocean, as this might seem to indicate, means that a question mark is placed over all of its pilots. This in turn means people will be less confident in flying with Malaysia Airlines, meaning a further downturn in its already struggling business," Kingsbury said in an email.

Officials have been stymied in their efforts to explain why the Boeing 777 carrying 239 people veered so far off course during a flight from Kuala Lumpur to Beijing on March 8, 2014. Theories have ranged from a deliberate murder-suicide plot by one of the pilots, to a hijacking, to a mechanical catastrophe. Similarly, search crews have been unable to find the main wreckage of the plane despite a sweeping underwater hunt of a remote stretch of ocean off Australia's west coast.

Last month, officials from Malaysia, Australia and China announced that the underwater search will be suspended once the current search area has been completely scoured. Crews have fewer than 10,000 square kilometers (3,861 square miles) left to scan of the 120,000-square kilometer (46,332-square mile) search area, and should finish their sweep of the region by the end of the year.